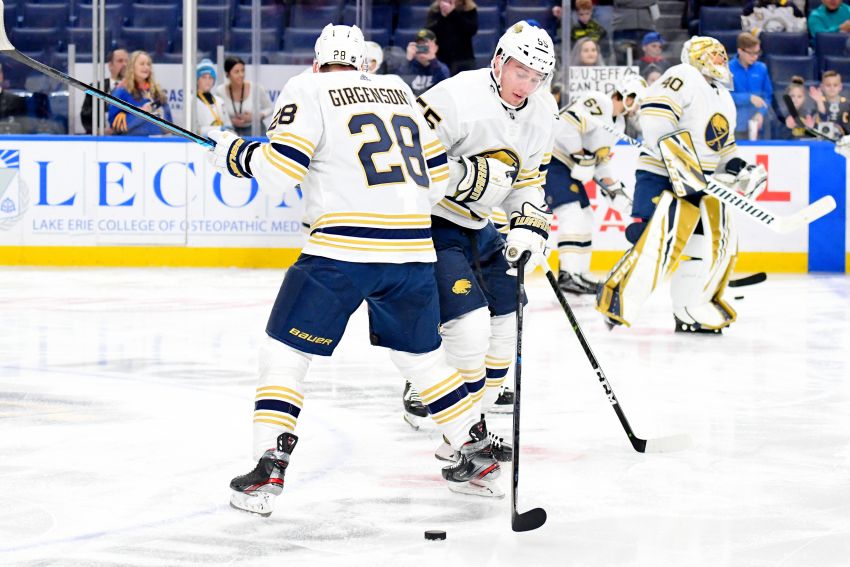 Zemgus Girgensons and Rasmus Ristolainen bump each other before a game this season. ©2020, Micheline Veluvolu

BUFFALO – Sabres center Johan Larsson was standing beside defenseman Rasmus Ristolainen waiting for a practice drill to begin when he sensed an opportunity.

“(He) hits guys and tries to sneak up on you,” Larsson said of Ristolainen. “When you can, you got to find a little spot to get back at him.”

So Larsson, affectionately nicknamed “Angry Larry” by his teammates, gave his buddy a friendly shove Thursday on the KeyBank Center ice.

“He’s grumpy and angry, but in a good way,” Ristolainen said of Larsson. “He’s harmless and good friends with everyone, easy to talk to and joking around.”

Of course, Larsson showcases a much different personality during games, morphing into a supreme agitator.

“When we go out there, he’s a piece of (crap) for the other team, and that’s what I love about him the most,” Ristolainen said.

Having watched Larsson, 27, up close for seven seasons, Ristolainen, 25, knows how much opponents detest his close friend.

Only three players – Larsson, Ristolainen and winger Zemgus Girgensons – are left from the Sabres’ first tank team in 2013-14.

“When we came in, we were pretty much the only young guys here and kind of had to come together because it was easier,” Ristolainen said. “We were all kind of in the same situation.”

Having entered the NHL together and endured a lot of losing and turmoil – Ralph Krueger is the fifth coach they’ve played for in Buffalo – the trio has grown “really close,” according to Ristolainen.

“Johan and Zemgus, they’re my boys,” he said. “We’ve been here seven years together.”

Girgensons said: “It’s kind of like a brother relationship with those guys. We’ve been through it all.”

They’ve experienced about everything but a playoff run. The Sabres have compiled a wretched 197-284-71 record during their NHL careers, finishing dead last three times.

If they finally reach the postseason this spring, it will likely be with another team.

Girgensons and Larsson will become unrestricted free agents following the season. Given they’ve enjoyed strong campaigns, they could be coveted by clubs looking to beef up their forward depth before Monday’s trade deadline.

“I’ve been here seven years,” Girgensons said. “I know I’m a UFA. What happens happens. It’s not in my control.”

Larsson said of his future: “I haven’t really thought about it.”

Ristolainen, meanwhile, has enjoyed a stellar season, improving his rating from a ghastly, NHL-worst minus-41 to zero. The Finn has two years left on his contract at an affordable $5.4 million salary cap hit.

The Sabres, who rank sixth in the Atlantic Division, should consider anything that would help them. They haven’t made the playoffs since 2011, the NHL’s longest drought.

Still, dealing Ristolainen would be a blockbuster, and those trades usually materialize in the offseason.

While Ristolainen’s improvement has garnered most of the attention, Girgensons, 26, and Larsson have compiled perhaps their best NHL seasons.

“That line has been an example through the season of how we want to play and has created some exciting offense, too,” Krueger said. “We think down the stretch here they seem to be on the verge of even more offense and often getting the call of playing the top two lines of the other team.”

Krueger’s words illustrate why Girgensons and Larsson could be staying put: the Sabres sorely need them.

The Sabres lack forward depth, especially down the middle. Other than captain Jack Eichel, Larsson has become Krueger’s most consistent center.

“His calm – whether it’s on the bench or during the game, in his (own) game – he takes a defensive-first, Swedish kind of approach with wingers,” Krueger said of Larsson.

Girgensons, his left winger, has already scored 10 goals, his highest total since netting 15 in 2014-15.

“I’ve been a stable and consistent two-way forward for the team,” he said.

Larsson likes playing for Krueger – he said his positive mentality has helped him thrive – and sounds like he would like to stay in Buffalo.

“You start knowing other people around the town and all that, know where to go,” he said. “It just feels like home. I feel like the fans have been good here, the people have been great here. Good time here. I like it.”

3 thoughts on “Through seven years of losing, three Sabres have grown close”