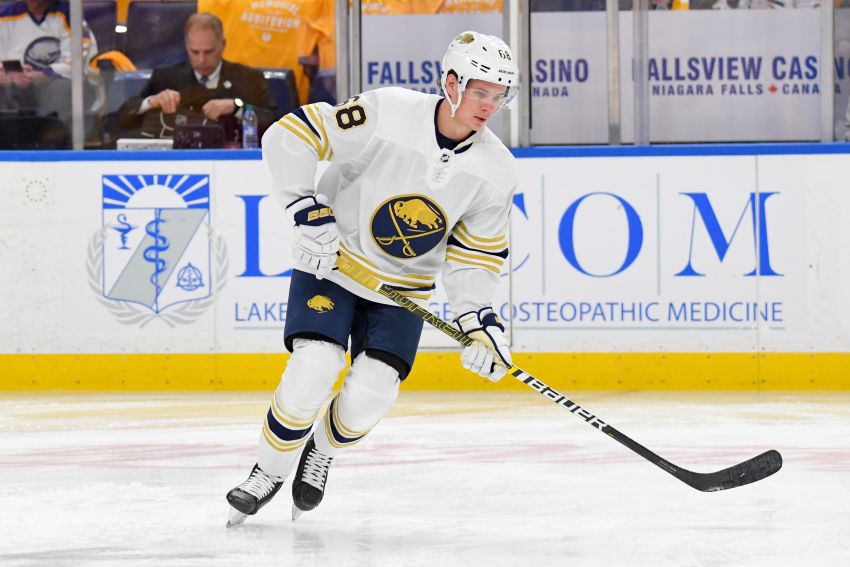 Victor Olofsson has been piling up points. ©2019, Hickling Images

BUFFALO – With the Sabres up one goal late Saturday afternoon, winger Victor Olofsson grabbed a pass at his own blue line, skated through the neutral zone and backhanded the puck into an empty net.

After the Los Angeles Kings scored in the final minute, Olofsson’s 16th goal this season became the winner in the Sabres’ 3-2 victory. It was also his 24th point in the last 22 games entering tonight’s road contest against the Ottawa Senators.

Olofsson, 24, has been the NHL’s hottest rookie, piling up points and morphing into the Sabres’ top offensive threat not named Jack Eichel.

The Swede possesses a deadly release, and he has consistently utilized his wicked one-timer to score from the circle.

The empty-netter, of course, lacked the flash that accompanies most Olofsson goals. Still, it illustrates his rapid development and growing confidence.

“I want to be a player that the team and the coaches can trust, and if you get to play even in the last few minutes when we’re up by a goal, I feel like that’s a big confidence boost right there,” Olofsson said following Sunday’s practice inside KeyBank Center.

Krueger said most teams wouldn’t use their top scoring line late in a one-goal game. But he likes the players’ connectivity and how they work to get the puck back in the defensive zone.

“We just have more and more confidence with them as a line, and Victor is a big part of that,” Krueger said. “He’s really, really quick at reading when Jack and Sam have something ahead of him, how he supports that and how he gets above that. He’s always tracking back as hard as he attacks forward.”

The mature game Olofsson showcases has him on pace to enjoy one of the greatest rookie campaigns in Sabres history.

Olofsson has already scored 16 goals and 34 points in 37 contests, gaudy numbers that rank first among NHL rookies and only trail Eichel’s 24 goals and 51 points on the Sabres.

At his current rate, the former seventh-round pick would compile 35 goals and 75 points over an 82-game season.

Olofsson has scored nine goals in the last 15 games. He hasn’t gone more than four outings without a point this season.

After a scorching start on the power play – he scored six goals in the first seven games – Olofsson quickly transformed into a stronger all-around presence.

“He’s more confident,” Sabres winger Kyle Okposo said. “I think that anytime you come in and you’re cast in a role with Eichs and Reino, I think you automatically get on your heels a little bit and just start looking for those guys, especially Jack.

“He’s done a good job just playing his game, and he’s making the right play. If that calls for him to skate, he skates. If it’s pass, pass.”

In recent weeks, Olofsson has displayed a heavier game and utilizing his 5-foot-11, 183-pound frame.

“I feel like that’s a big part of it,” he said of his recent success, “and I feel like I could put guys on my back and protect the puck a lot better than I did in the beginning of the season.”

Olofsson’s playmaking has also improved. For example, in Tuesday’s 5-3 road loss to the Toronto Maple Leafs, he created a goal by bouncing a pass off the boards and hitting Eichel in stride.

“I feel like that kind of goes hand in hand with just being strong on pucks and a little bit more calm and confident with the puck,” said Olofsson, who registered four assists in the first 15 games.

“He sees the ice well,” he said. “You can tell he’s getting more and more confident.”

“I’m beginning to play big minutes almost every game,” he said. “I feel like that helps me a lot just to be comfortable and confident.”