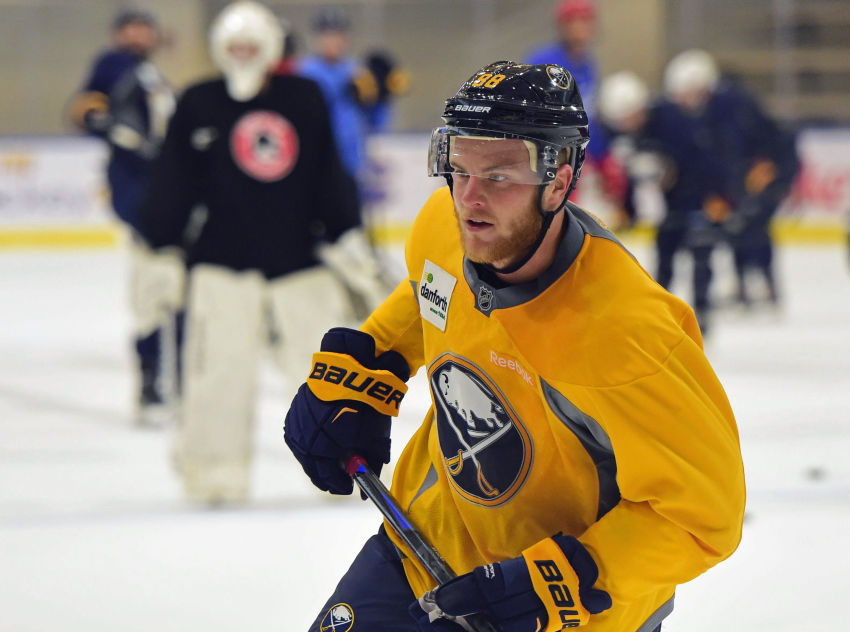 BUFFALO – Amid all the commotion surrounding one of the busiest and perhaps most pivotal days in the Sabres’ 45-year history, winger Jamie McGinn’s name got lost.

That happened because McGinn arrived in a blockbuster trade from the Colorado Avalanche with star center Ryan O’Reilly moments after the Sabres drafted phenom Jack Eichel and hours after they acquired starting goalie Robin Lehner in another big deal.

So McGinn, 27, a seven-year veteran, quickly became an afterthought June 26.

Normally, snagging a player with McGinn’s talents – he’s a 6-foot-1, 210-pound third-liner who has seasons of 19 and 20 goals – would be heralded. Instead, some have simply labeled McGinn, who calls himself a “bump-and-grinder,” a minor part of the deal.

Last season, however, Colorado missed the playoffs after imploding early. A back injury limited McGinn to only 19 games. He underwent surgery in December and said he has fully recovered.

“The year before it was awesome,” McGinn said. “We just couldn’t seem to lose. We’d take games to overtime and we’d just seem to get it done every night, and it was fun when you were rolling. Last year, we started a difficult way. I went down with (an) injury. It was more of a role when I was at home just to keep the guys positive, keep the boys loose.

“It’s a different way. I’ve never had an extended period where I was injured, missing games. It was a learning experience. I learned the game, I got to watch a lot, just kind of slow things down, see how it happens. Hopefully, it’ll help me this year.”

McGinn wasn’t aware the Avs might dish him. But he knew what had happened when a Denver area code came up on his phone while he was driving to a barbecue on draft night. He turned around, drove home and waited for the trade to officially be announced.

“It was pretty exciting,” he said. “It was more a shock at the start, just because I didn’t know I could be traded.”

He added: “Every time I come here I know it’s a loud rink and I enjoy being here.”

McGinn already feels comfortable in Buffalo. He grew up Fergus, Ont., about a two-hour drive, and often visited here to attend Sabres and Bills games (he’s an Oakland Raiders fan). Locals welcomed him warmly late last month before he even arrived in town.

“Just crossing the border, the people there all noticed my Colorado plates and were just pretty excited to have us and (are) ready for this year,” McGinn said. “There seems to be a buzz around the city.”

O’Reilly’s acquisition created much of that buzz. McGinn is close friends with O’Reilly and knows the Sabres have a special talent in their arsenal.

“He’s just a steady guy,” McGinn said. “You know what you’re getting from him every night. He’s not going to take a night off. He takes hockey to heart and wants to do well. I know both of us coming over here, we hate losing. We want to make sure we get off on the right foot here.”

“No one likes losing, and I’m not about to start,” he said. “I want to win here. This is my eighth year coming up in the league, so you’re running out of time to starting winning and get a championship.”

Former Sabres forward Derek Plante, who scored a Game 7 overtime playoff winner against the Ottawa Senators in 1997, and former Chicago Blackhawks star Jeremy Roenick, a two-time 50-goal scorer, have been named the coaches for the Sept. 24 All-American Prospects Game at the First Niagara Center.