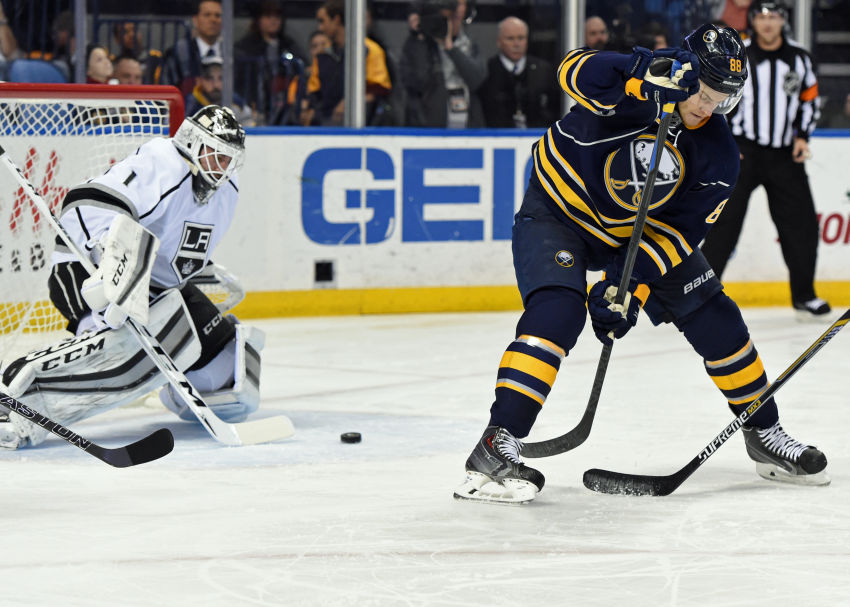 BUFFALO – Usually, Ryan O’Reilly said, if he gets an open look in the slot, he likes to shoot low blocker side on the goalie. But given the Sabres center was falling in front of sliding defender Alec Martinez, he just had to take the best shot he could in overtime.

“I just tried to get it off in that area,” O’Reilly said Saturday after his 100th NHL goal – a nifty score at 3:19 over former Sabres goalie Jhonas Enroth’s right shoulder – clinched a 2-1 win against the Los Angeles Kings, ending the Sabres’ three-game losing streak.

O’Reilly, the Sabres’ jack-of-all-trades and most valuable forward, had done just about everything else this season except score an overtime winner.

“It’s probably going to be hard to overstate it,” Sabres coach Dan Bylsma said about O’Reilly’s value. “He’s pretty much been there in every situation and every opportunity for our team. He’s come up big again for us. He obviously scores a fantastic goal there in the overtime.

“But all game long I think he’s out there against the top line against the opposition. He’s been nothing short of magnificent for us.”

The goal was special for O’Reilly, who has three goals and 10 points during his seven-game point streak.

“Hopefully,” he said, “there are more milestones to come.”

The Sabres, who often looked overmatched in three straight losses during their West Coast trip, performed strongly throughout their 12th win this season, clamping down against the Kings, who had won six straight contests.

Marian Gaborik opened the scoring the scoring on the Kings’ first shot at 4:47, Jamie McGinn tied it at 7:19, backhanding O’Reilly’s pass on the power play between his own legs.

Then another coach’s challenge, a new rule this season, burned the Sabres.

Offside reviews have cost the Sabres four goals in 30 games. It started opening night and happened again Saturday, when Jake McCabe converted Jack Eichel’s backhand saucer pass in close, giving the Sabres what appeared to be a 2-1 lead with 11.8 seconds left in the second period.

The 18,133 fans inside the First Niagara Center roared and the Sabres celebrated, but seconds later, officials announced the Kings were challenging. Replays showed Sabres captain Brian Gionta was slightly offside entering the zone.

“I’d like a few more to go in our favor, but they got it right,” Bylsma said. “It was offside. The linesman said at the end they had a little, just at the end, video evidence to overturn it. I said, ‘Well, you got it right.’ I’m glad they’re getting it right.”

While Bylsma said he felt some frustration on the bench, O’Reilly’s believes “no one was affected” by the disallowed goal.

“We knew we were okay, we were playing well and we would have other opportunities,” he said. “That’s a mature thing for us to start learning how to do that.”

Ullmark faced three overtime shots, as many as he saw in the first period.

“Real good game,” Bylsma said about Ullmark. “It was a bit of a tough game, too, in terms of not getting a lot of shots.”