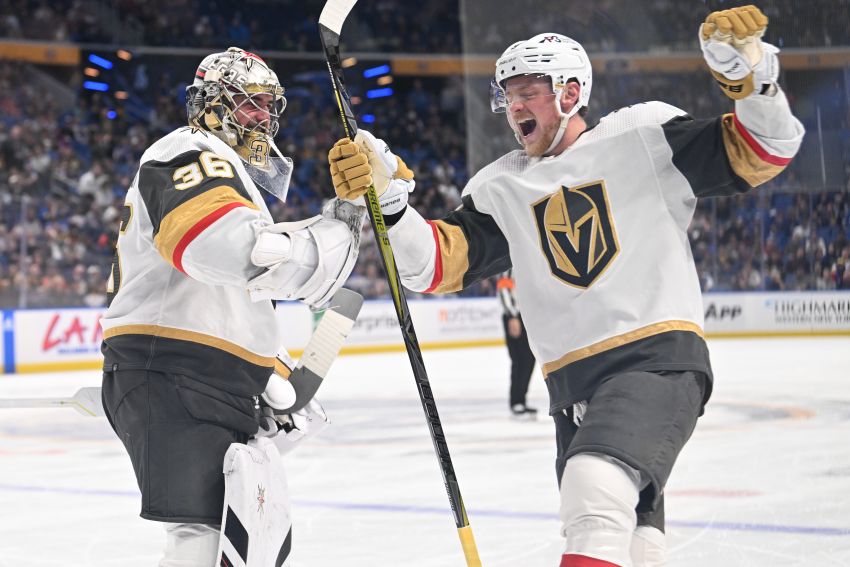 BUFFALO – Sabres fans didn’t even wait for Vegas Golden Knights center Jack Eichel to touch the puck Thursday. As soon as his skates hit the ice, they began booing loudly. When he gained possession, the jeering intensified.

The season-high crowd of 15,757 fans at KeyBank Center booed when the ex-Sabres captain lost a faceoff and again when goalie Eric Comrie stymied him on two breakaways. When the video boards showed replays of the saves, they cheered.

And, of course, they booed when Eichel scored three third-period goals in the Golden Knights’ 7-4 win over the reeling Sabres, who have lost four straight games.

Yes, Eichel, who heard chants all night he stinks, had a hat trick in his second game as a visitor in Buffalo.

Following his first goal 6:13 into the third period, a smiling Eichel played to the fans, facing the crowd and raising his arms, soaking it all in.

“It felt good,” the ultra-talented center said of scoring his first goal, which put Vegas up 5-2. “I had a couple of breakaways. You guys were here. They were obviously on me all night. Yeah, it felt good to get one. It was a big point in the game for our group. It never felt like we were fully in control.”

Eichel scored again at 14:37, putting Vegas up 6-3, and into an empty net at 19:52. After completing the hat trick and celebrating with his teammates as hats and one Eichel Sabres jersey were thrown on the ice, he waved to the crowd.

“I haven’t had too much of luck this year on empty nets,” Eichel, the face of the Sabres before getting traded last year, said following Vegas’ ninth straight victory. “I missed few. Yeah, just trying to take advantage of it when you can.”

“He probably should have had seven points tonight,” Vegas coach Bruce Cassidy said. “He was our best player. He was ready to go, he wanted this win. We just wanted to support him, obviously. It’s tough. I mean, they’re on him all night. But it shows the character, wants to win the game, will do anything to win the game and we see the raw emotion when he gets those big goals.”

The Sabres, meanwhile, hadn’t dropped four straight contests since a six-game skid from Feb. 17 to 27. Their fast 7-3-0 start already feels like a distant memory.

They host the 12-2-0 Boston Bruins on Saturday, so they have another stiff challenge.

While the Sabres looked downright awful at times defensively Thursday – Vegas had at least five breakaways – they generated offense and hung around, getting two goals from center Tage Thompson and scores from center Casey Mittelstadt and from winger Rasmus Asplund. Thompson and Mittelstadt’s early power-play goals tied the game. Asplund scored short-handed late.

“There’s no reason to not be confident,” Sabres coach Don Granato said. “If we were overwhelmed by the other team and it was not self-inflicted for the most part, you would – so it’s correctable. And they know it’s correctable. They know – we know – that we made errors that you can clean up and they can clean up and will clean up. There’s no reason to not be confident.

“This league can beat you up. My thought is we have a choice. If you want to get beat up by it, you get beat up by it. If you want to move on, you move on. But you move on with the lessons learned. I think that’s what this group has done a real good job at through the course. We’re a young team and we looked like a young team tonight. Pretty simple.”

Granato said some of the Sabres’ experienced players committed mistakes.

“Not a good role model in some situations,” he said.

Thompson said the Sabres got “sucked into playing” Vegas’ game.

“They’re a fast offensive team and they’re OK trading chances,” he said. “I think we got into that a little bit, a little bit of a track meet. Up and down the ice, trading chances back and forth. That’s not the way we want to play. …

“At times, we found our game, just playing simple, getting pucks behind them and that’s where we get our offense and our chances. It’s growing pains and a learning curve.”