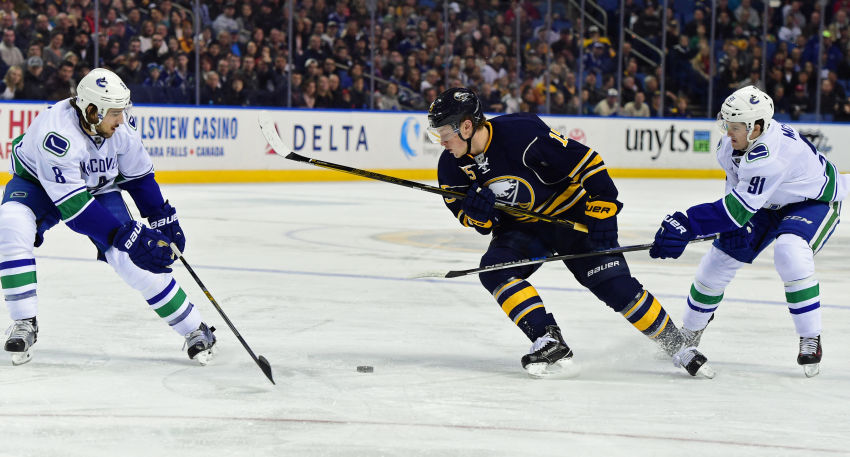 BUFFALO – Realistically, one quarter into the season, seventh in the stacked Atlantic Division is a place many envisioned the Sabres would be at climbing out of their rebuild.

The 8-10-2 Sabres, as their current four-game losing streak (0-2-2) illustrates, are still a raw work in progress. They’ve already endured a string of ups and downs – a disappointing 2-6 start, a significant 6-2 run to reach .500 and injuries to defenseman Zach Bogosian and winger Evander Kane, to name a few – entering tonight’s tilt against the St. Louis Blues inside the First Niagara Center.

What’s clear is the Sabres’ also-ran days are over under new coach Dan Bylsma. Even in their losses they’re usually competitive. Sure, the playoffs probably aren’t realistic this season. But they’ve shown enough progress and possess enough talent to make fans wonder what kind of team they might develop into in the near future.

Here’s some of what’s transpired so far:

The offense is still terrible

After getting blanked 3-0 Saturday in Dallas, the Sabres have scored only four goals in their last four games and just 42 overall, 2.1 a contest – the NHL’s fourth-worst total. That’s a 172-goal pace with centers Jack Eichel and Ryan O’Reilly in the lineup. The Sabres scored 153 times last season.

Where would the anemic offense be without O’Reilly, who has a team-high seven goals and 16 points, and Eichel, who has six goals and 10 points?

No one else even has five goals. Captain Brian Gionta, Marcus Foligno and Zemgus Girgensons all have one score each. Foligno only has nine shots in 19 games.

The rinks starts to buzz each time Eichel, 19, touches the puck. The second overall pick has been electrifying throughout the season, showcasing his dynamic talents almost nightly. He usually generates two or three prime scoring chances a game on sheer talent.

But Eichel isn’t an NHL star yet. He’s raw defensively. On the Stars’ first goal Saturday, he left a Dallas player open in front. Eichel hasn’t scored a goal in five games, a drought that might be the longest he’s ever endured. It took him 14 games to record his first assist.

No one seems to be down on Eichel. He’s already one of the Sabres’ best players. Still, any expectations he would burst into the NHL and instantly become a superstar were wrong.

Tyler Ennis might be enduring the worst stretch of his career

When asked by a reporter Saturday if Ennis, 26, looks “out of sync,” Bylsma replied, “I think you just answered your own question.” Bylsma said Wednesday Ennis was pressing.

Ennis, the Sabres’ best and often lone offensive threat for two seasons, is struggling in Bylsma’s system. Clearly, the shifty winger’s better when he has more freedom to be creative and showcase his speed. Ennis thrived when former coach Ted Nolan basically gave him free reign.

Perhaps Ennis, who has three goals and 10 points, is experiencing an adjustment period like a lot of his teammates. But Bylsma is clearly growing impatient. After spending all season beside either O’Reilly or Eichel, Bylsma put Ennis with center Johan Larsson last week before demoting him to the fourth line late Saturday. Ennis hasn’t scored a goal in nine games.

The goaltending has been strong

The duo has alternated starts the last seven games. Ullmark, 22, will likely receive his ninth NHL nod tonight. The Swede’s shiny .926 save percentage is tied for ninth in the league.

Overall, the Sabres’ team save percentage of .906 ranks 23rd. Still, Johnson and Ullmark have given their teammates a chance to win most nights.

Notes: Bylsma said Saturday that defenseman Mark Pysyk, out the last two games with a bone bruise, is day-to-day. … The Sabres, who play four times this week, had Sunday off.