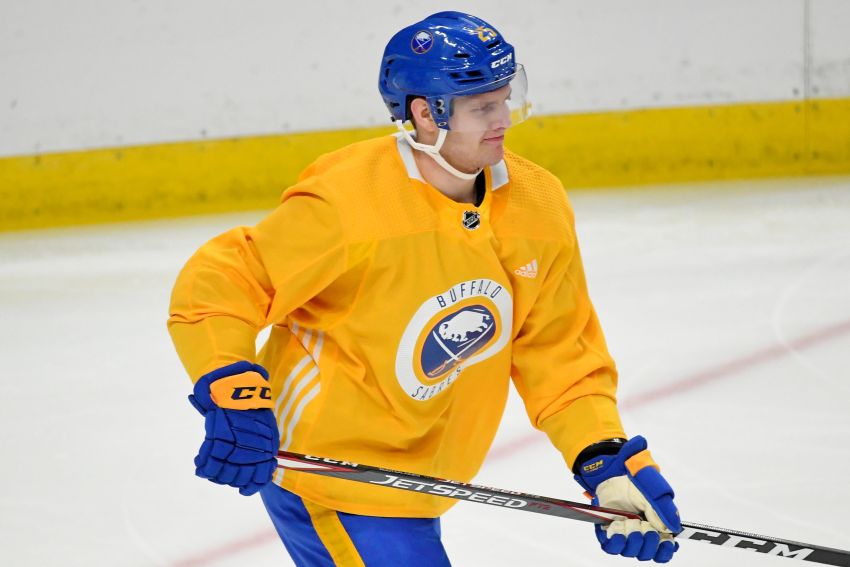 Arttu Ruotsalainen could spent time in Buffalo on the taxi squad and in Rochester. ©2021, Micheline Veluvolu

In the COVID-19 world, the Sabres start each day by having a logistics meeting.

NHL teams can utilize a four- to-six man taxi squad this season, meaning in addition to figuring out the big league and AHL rosters, the Sabres have another group they must prepare to handle.

“This is so much a new world, trying to figure out exactly how we’re going to integrate the taxi squad,” Sabres coach Ralph Krueger said on a Zoom call. “I’m going to be honest with you, this is a process nobody’s ever gone through before.”

The Sabres haven’t named a taxi squad yet. The four players they waived Sunday – defenseman Brandon Davidson, goalie Dustin Tokarski and forwards Steven Fogarty and C.J. Smith – could be used on the practice roster.

Normally, most of the taxi-squad players would be assigned to the Amerks.

“But how many of those guys are going to skate with us?” Krueger said. “Some days it might be six, some days, because we’re only going for a 30-minute skate, it might be three or four. So that’ll be adjusted every morning and we will work with those players.”

Of course, the Sabres, who open the season Thursday, must ensure the 20 players who will dress for games receive the best possible preparation.

“At the same time, we have to keep these (taxi-squad) guys up to speed, because we might need them and they’re not playing in Rochester,” Krueger said.

He added: “Probably very rarely will we actually only practice with 20 (players). It will probably be three goalies, eight D and 14 forwards and the extra taxi-squad players would be working out separately in other ice times.”

At the start of training camp, the Sabres essentially separated the players who will be sent to Rochester, putting them in the second practice group.

On Sunday, the Sabres elevated defenseman Jacob Bryson to the main group and put forward Arttu Ruotsalainen in the “Amerks” group. Instead of practicing at KeyBank Center, those 12 players practiced at LECOM Harborcenter for the first time.

Veteran players could comprise most of the taxi squad. While practicing in the NHL and “the excellent exposure to the environment,” as Krueger called it, can be beneficial, prospects need to play games.

“We have to be careful with players,” Krueger said. “Ten, 20 games go by like this this season and we want to make sure there’s nobody getting stuck in only practicing and not having game exposure. We don’t expect a big game schedule in Rochester, so we’re going to have to access that every day. How long has the player been here? We have systems in place to monitor that, but first and foremost would be to find that proper mix on a player between exposing him to the NHL or a practice like today for (prospects) Jack Quinn and Dylan Cozens was outstanding.

“But we also have to make sure they’re playing hockey games. Getting that right is one of the extra challenges we have this season.”

Ruotsalainen, who scored a league-best 16 goals and 27 points in 19 games in Liiga earlier this season, could spent time on the taxi squad and with Rochester.

The Finn, 23, spent camp with the Sabres last year but his contract stipulated they had to send him back to Ilves, his team at home, if he did not make the NHL. He can play in the minors this season.

“He’s coming off playing more than half a season in the Finnish Elite League, which has probably been taxing,” Krueger said. “When you look at the training camp we’ve been running here, (it’s) mainly focused on the players that didn’t play any games. He quite clearly has some fatigue at this point and we look forward to exposing him possibly here with us in the taxi squad and getting some minutes, but also in combination with Rochester.”

Sabres winger Victor Olofsson, who missed two days of camp last week after crashing into the goalpost, said he bruised his elbow.

“Everything looked good on the X-ray, so there’s nothing serious,” he said. “It’s just it hurt. I had some pain there a few days after, but I feel really good now.”

Krueger said defenseman Rasmus Ristolainen and forwards Curtis Lazar and Kyle Okposo missed Sunday’s practice for maintenance. Following a day off Monday, Krueger expects them back on the ice Tuesday.