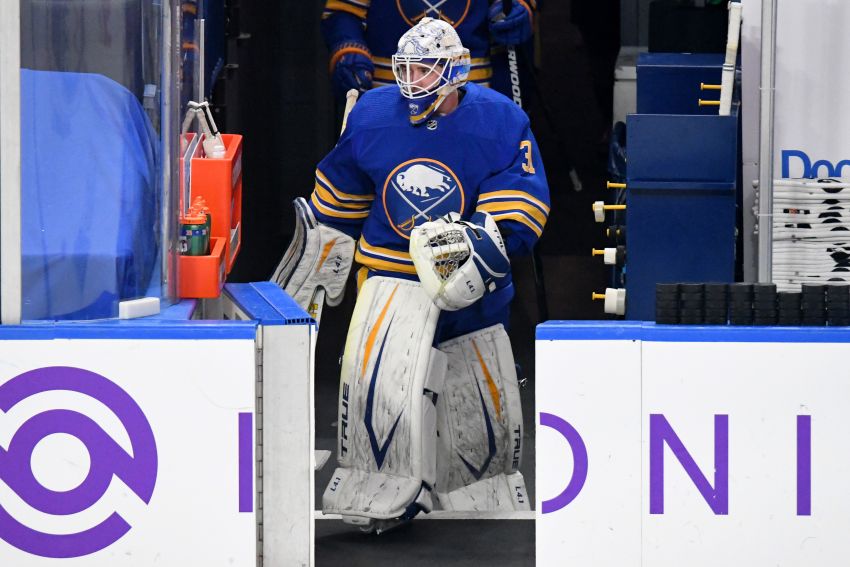 Taxi-squad goalie Michael Houser, who has never played an NHL game, will back up Tokarski. Houser, 28, hasn’t played a contest at any level in more than 13 months.

Top goalie prospect Ukko-Pekka Luukkonen would be the only available recall, but Rochester Americans coach Seth Appert said the Finn is day to day with a lower-body injury. Luukkonen missed Wednesday’s 5-3 loss to the Cleveland Monsters.

“It’s a challenging situation,” interim coach Don Granato said on a Zoom call this morning of the Sabres’ goaltending depth.

Update: Sabres general manager Kevyn Adams said Luukkonen, 22, skated today and could make his NHL debut this weekend if the Sabres need him.

“There may be a situation if he’s where we feel he’s ready, and depending on the health of our other goaltenders that we’ll know over the next 24-48 hours goes, yeah, that may happen,” he said.

The Sabres, Adams said, will use an emergency backup tonight as their taxi squad goalie.

Granato did not have an update on Ullmark, who left Tuesday’s 3-2 shootout loss to the Boston Bruins after gloving a shot at the 4:54 mark.

“We’re just getting through,” Granato said. “We’ve been doing this for the last couple of weeks, it seems.”

Granato said he hopes to have more information Friday on Ullmark and Hutton.

Ullmark has been the Sabres’ backbone this season, compiling a 9-6-3 record with a 2.63 goals-against average and a .917 save percentage in 20 games.

The rest of the Sabres’ goalies have a combined record of 1-19-4. Yes, that number’s correct. They’ve mustered just one win combined.

Tokarski, however, has often performed well despite compiling a 0-4-2 mark with a 3.54 goals-against and a .905 save percentage. He made 29 saves Tuesday in relief of Ullmark.

Granato said Tokarski’s “competitiveness” and “very good instincts” helped him reach the NHL again after spending the last three years in the minors.

Tokarski, 31, spent most of this season on the taxi squad before the Sabres traded goalie Jonas Johansson last month.

“He went from a No. 4 position to the net really quick in the sense of not a lot of time to even think he had any chance of being thrown in the net,” Granato said of Tokarski. “And since that point, he looked erratic in the net compared to how comfortable he looks now.

“I’m not saying he was erratic. But compared to how he performed last game, he just looks more comfortable, which shows me his timing, his feel for the level, shooters at this level, maybe his comfort within our system knowing high-pattern shot chance types against. That helps a goaltender as well. He’s progressed nicely, I think, in those areas fast.”

In other news, Granato said forward Riley Sheahan, who briefly left Tuesday’s game after getting hit, will miss tonight’s game at Capital One Arena. Tobias Rieder will replace him.