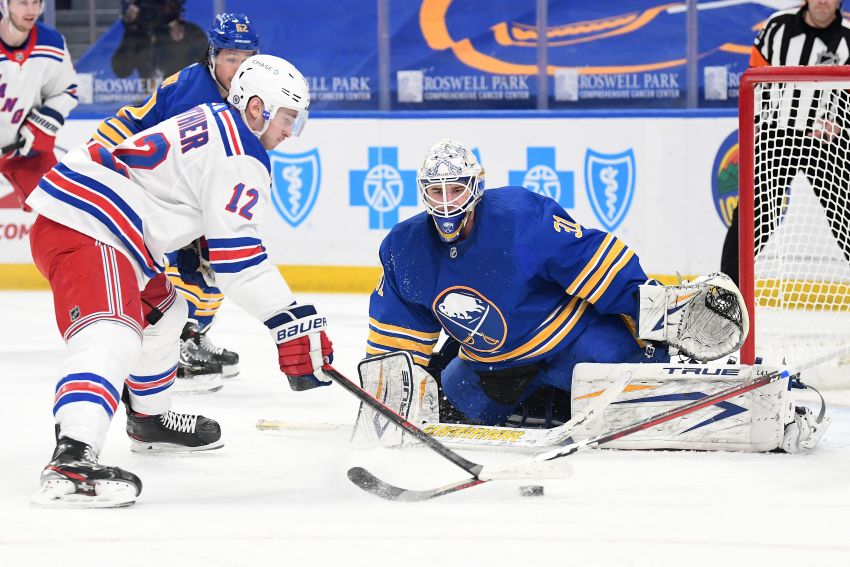 The fatigued Sabres chased Thursday’s game over the final 40 minutes of regulation, generating little offense. They had no business being in the contest against the New York Rangers.

Only Tokarski’s splendid goaltending – he made a career-high 44 saves – kept it close.

Snatching the unlikely win would’ve been special for Tokarski, a decorated AHL goalie who has played 38 NHL games. He hasn’t won a big league outing since Dec. 15, 2015.

“He deserved that one big time,” Thompson said on a Zoom call following the Sabres’ 3-2 overtime loss inside KeyBank Center. “He played a great game, stood on his head, made some huge saves for us. It would have been nice to get him the win.”

Still, the point the Sabres stole for reaching overtime inside KeyBank Center belongs to Tokarski.

The Rangers scored on their first shot of overtime with 27.7 seconds left – Artemi Panarin adroitly fed Mika Zibanejad on a two-on-one – denying the Sabres their second straight win after 18 consecutive losses.

Tokarski, who has spent most of this season on the taxi squad, was thrust into action last week when goalie Carter Hutton was injured, playing three times. When No. 1 goalie Linus Ullmark returned, he took a backseat again.

But with back-to-back games, Granato turned to Tokarski again.

At just 5-foot-11, a small stature by goalie standards, Tokarski knows he must battle and try to play like he’s a few inches taller.

“I like to compete, I like to fight hard, try to see every single shot to give myself the best chance to stop it, and when you find that good zone in the crease, whether it’s mid or high, just to be able to be able to track the and just get in a groove is my game,” Tokarski said. “Being 5-11, I got to try to play a little bigger than the guys that are bigger out there. And as I said, tonight I was able to see a lot of those pucks and beat the passes because the guys were clearing bodies out.”

Thompson scored from the left circle with Tokarski on the bench for the extra attacker.

“It’s pretty cool, everyone goes nuts and you just got to just refocus and get back to trying to get the extra point,” Tokarski said.

Winger Rasmus Asplund scored the Sabres’ other goal 2:06 into the game.

Colin Blackwell and Flip Chytil scored for the Rangers.

The Sabres, who beat the Philadelphia Flyers 6-1 on Wednesday, played their third game in four days, and it showed.

“Well, fatigue is a factor certainly when you play back-to-back and the other team didn’t,” Granato said. “I mean, there’s no way around it, the other team is going to be better rested, better prepared. So now you’re going to have to just deal with it. When we spoke to the team after the second period, that was the number one message. What you’re battling, fellas, is fatigue. All the signs show it. You know it, we know it, let’s talk about the elephant in the room here.

“A lot of it, we had to change our mindset and just find a way to surge and push through, get back to playing our game because we didn’t in the second period.”