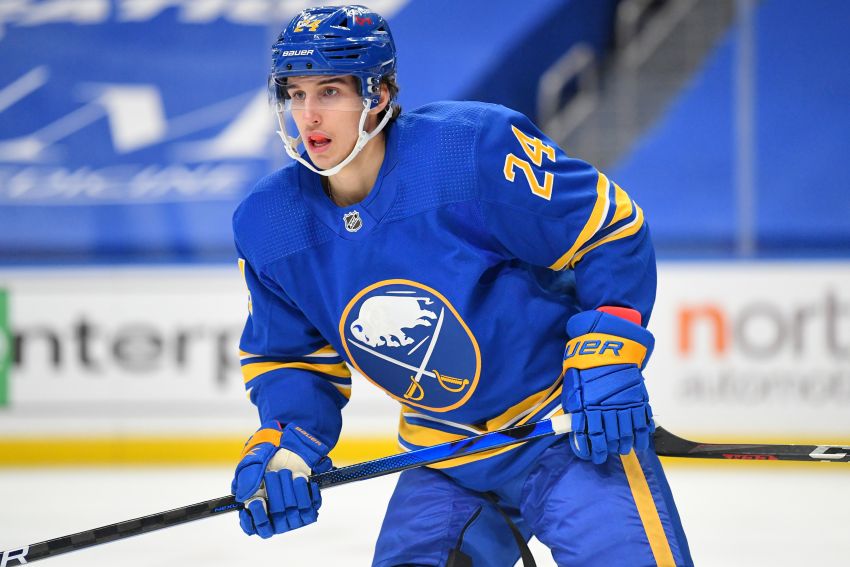 BUFFALO – Just over 13 minutes into Tuesday’s 2-0 loss, Sabres winger Dylan Cozens grabbed a pass at the bottom of the right circle with goalie Tuukka Rask seemingly out of position to stop the puck.

But a desperate Rask recovered enough to get his glove, which was behind his back, on the puck to stop it. The save, perhaps one of the NHL’s best this season, kept the Boston Bruins up 1-0.

“It was a great save by him,” Cozens said on a Zoom call after the Sabres were shut out for the eighth time in 46 games this season.

“It’s kind of desperation more than that at that point when you can’t push over to that side so you just throw anything at the puck you can and hopefully it hits you,” he said.

If the Sabres had tied the game early, then perhaps they could’ve generated more momentum and made Tuesday’s game inside KeyBank Center more competitive.

It felt like the heavyweight Bruins possessed a four-goal lead all night. The Sabres, for example, mustered just one shot on goal in the opening 12 minutes of the second and were outshot 18-6 in the period.

“They showed … a very strong competitive identity,” interim Sabres coach Don Granato said. “We got ourselves in trouble early, probably puck management, and chased the game. … Rask was good when he had to be but we didn’t set the pace. They set the pace.”

Still, the Bruins took five penalties, giving the Sabres some life. They ended three of their power plays by taking a penalty.

The Sabres stymied a six-on-three in the waning minutes – goalie Dustin Tokarski went off for an extra attacker during a two-man advantage – by taking a too-many-men penalty.

Granato said those infractions illustrate the Sabres wanted an easier game. Nothing will be simple in a late-season contest against the Bruins.

“The competitive nature of a team like (the Bruins) and moved to this time of year where the points are so valuable for them, that was the difference,” Granato said. “That’s why you take a penalty. They’re just one step quicker. It matters a little bit more to them and you’re on the outside looking in and you’ve got to reach.”

The Sabres also host the Bruins on Thursday and Friday. It’s only the second time in franchise history they will face the same opponent in three consecutive regular-season games.

Granato sees the series against their East Division rival as a positive.

“I’m glad we play them again because we get a chance to look in the mirror, look at the video, speak of this game, and measure ourselves again against a great hockey team and a team that is fighting for every point,” he said. “There’s no easy game for us. We’ve spoken that, spoken about that plenty of times, and the next game will not be any easier. I know lots of players on that team. We all do. I know some personally and they’re a very competitive group of people over there. That’s what we need.

“We’re trying to advance and improve our team individually, our players individually, our team collectively, you want to get opposition like this. You learn a lot about yourself. Clearly, we need to elevate based on what we went through today.”

Brad Marchand and Connor Clifton scored for the Bruins. Tokarski made 39 saves.

3 thoughts on “Bruins show Sabres how they must compete: ‘We need to elevate’”