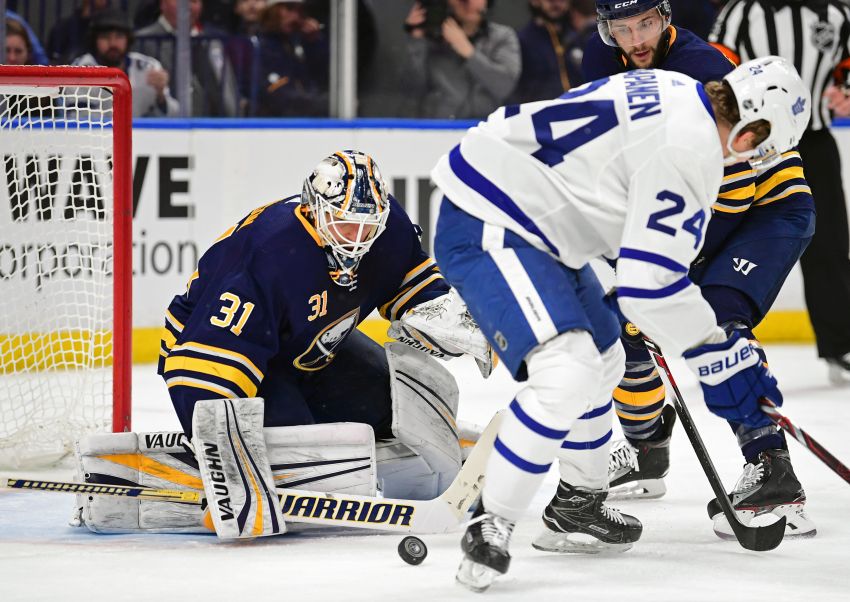 Ultimately, Johnson said his heart led to him re-signing here as a backup following a season with his hometown Calgary Flames, tonight’s opponent at KeyBank Center.

“There was something that drew me back to this team – the city, the fans, the organization,” Johnson said Tuesday. “There was just something – I don’t know – I had a connection to it the year before. I wanted to be in it for the long run. …

“I decided to come back knowing the team necessarily wasn’t going to be at the top, win a Stanley Cup, whatever it was. I wanted … to be a part of the organization because I believed in the group that was in there.”

Of course, the Sabres, despite their current 7-5-1 run, have been perhaps the NHL’s biggest disappointment, winning only 21 of their first 66 games. Johnson, meanwhile, endured a brutal start, going more than three months without a win.

“I’m not happy with how the season’s gone and how things have played out,” said Johnson, who will start tonight’s game.

But Johnson began turning his season around Jan. 22 in Calgary, making 32 saves in a 2-1 overtime win. The confidence his first victory since Oct. 15 generated helped buoy him.

Among netminders with seven or more appearances over that stretch, Johnson’s goals-against average and save percentage both rank fifth. He has also won three straight starts.

Throughout his struggles, Johnson insisted he felt fine and would keep the same approach, something Sabres goalie coach Andrew Allen echoed.

“It’s funny, you start winning games and people ask if it’s the best you’ve ever felt,” said Johnson, who has a one-year contract. “I’ve said from the start I’ve felt good about where my game is at and what it needs to be to have success. I can’t say enough about the way the guys are playing in front of me.”

His teammates, Johnson said, have been the biggest factors in turning around his miserable campaign.

“The way things were going on in the games, they’re completely different from what’s going on in front of me now and that’s why you’re seeing the results,” Johnson said.

“So situations have changed, the chances we’re giving up have changed, we have a lot more pressure on guys. There’s less time and space for guys to pick corners because we’re closing that time.”

Johnson said the Sabres are reacting to plays instead of thinking.

“That creates more space for me to see the puck,” he said.

Sabres coach Phil Housley believes Johnson has been showcasing a new level with his teammates.

“Let’s make no mistake, Chad has really given us some key saves at key moments in games,” he said. “He’s really stepped up his game, you can really see it in the results the last games he’s played.

“But I really like his demeanor in the net. He looks really comfortable. He doesn’t chase anything, he’s letting pucks hit him, he’s square to the puck, and when you do that, it’s not a wasted motion. He seems to be swallowing a lot of pucks.”

With Johnson playing so well again, it’s fair to wonder if he could return next season. Remember, he was terrific two years ago subbing for injured goalie Robin Lehner, compiling a .920 save percentage in 45 outings and earning the team’s unsung hero award.

Johnson wouldn’t speculate much on his future. Still, he could have one in Buffalo. Whether or not Lehner returns – he’s a restricted free agent and could be moved with prospect Linus Ullmark ready for NHL duty – the Sabres will need a backup.