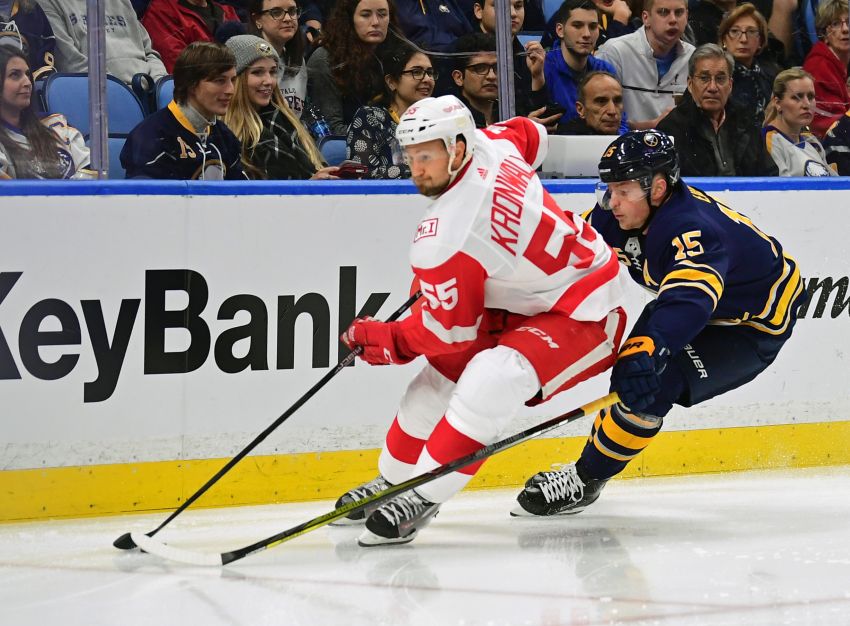 Still, Eichel, who returned to practice Tuesday, has been progressing in his recovery from a high right ankle sprain. The Sabres just don’t want to rush the youngster.

“He felt really good today,” Housley said this afternoon inside KeyBank Center. “It’s one of those things we’re trying to ease him back into things. He’s been out a long time, he’s got to get some practices in.”

Housley said Eichel, the Sabres’ leading scorer, could be a “possibility” for Saturday afternoon’s game against the Chicago Blackhawks.

“But I don’t want to put a timeline on it,” Housley said. “I just still feels that his progression is all that matters to us.”

“As much as you skate and you do everything you can, it’s a lot different than being on the ice with these guys competing and battling,” he said of practice compared to a game. “You can’t really put a practice together the same as you would get with the team. I felt good today and I’m just going to continue to try and take the right steps forward.”

Eichel practiced this morning inside Harbor Center beside some fourth-liners and players he likely wouldn’t skate with in games.

In other injuries news, Housley said winger Kyle Okposo, out since suffering a concussion last Thursday, is doing “very good, better than we thought.”

“He’s really responding well,” Housley said. “So we’ll continue to look at that every day. But I like where he is right now.”

“I feel back to normal,” Rodrigues said.

“It was a crazy couple days,” Bailey said.

The Williamsville native scored in Saturday afternoon’s 2-1 shootout loss to the Vegas Golden Knights. The next day in Rochester, he earned a one-game suspension for an illegal check to Reid McNeil’s head.

“There was a lot of emotions down in Rochester,” Bailey said of the Amerks’ 5-4 shootout win against the Syracuse Crunch. “I think that’s a team that we could see ourselves eventually seeing in the playoffs. We got up on them early and they started to run around, we started to run around.

“Obviously, my intent was not to hit him like that at all. I don’t wish that on anybody. I think it was just a quick play, a play where I was kind of in desperation mode, a guy in front of the net.”