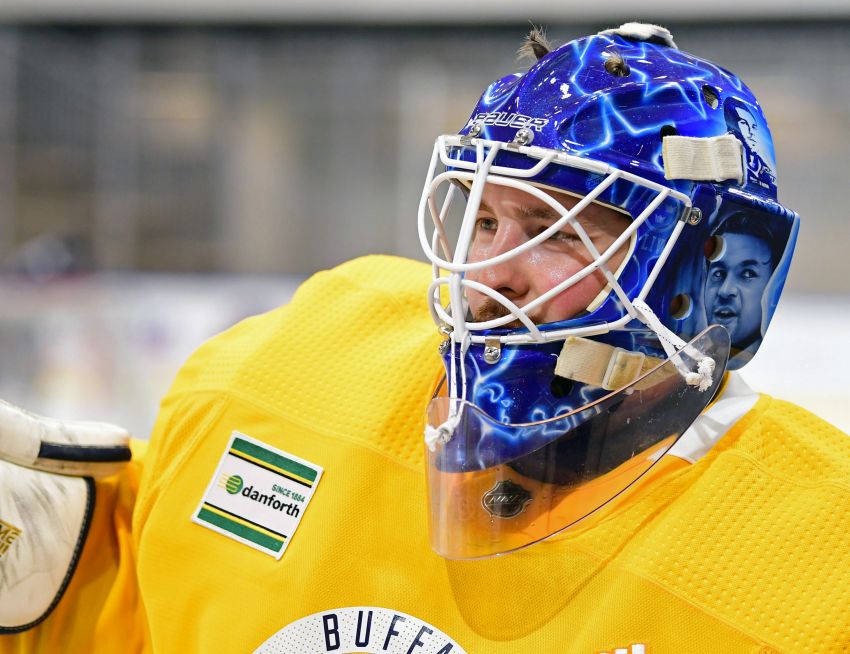 BUFFALO – The drill, Sabres netminder Linus Ullmark explained, is “very easy.” Someone – on Tuesday it was goalie coach Andrew Allen – shoots pucks at him “top shelf.”

“I just try to get my head up there and actually try to get the puck to where I want it to go,” Ullmark said following practice inside HarborCenter.

Yes, the 6-foot-4, 221-pound Swede really tries to redirect the puck with his head.

“Either it’s up or either it’s down to the corner,” the loquacious Ullmark said after the Sabres prepared for tonight’s preseason road tilt against the Pittsburgh Penguins.

So instead of, say, using his glove to snare the puck, in some instances Ullmark, 24, would rather headbutt it over the glass.

Ullmark, who has played 21 NHL games, said when he noticed New York Rangers goalie Henrik Lundqvist used his head to stop shots, he wondered why he didn’t simply catch the puck.

But then Ullmark learned shots – often tips or screens – come at NHL goalies so quickly they don’t have time to react with their arms or hands.

“So what do you got to do?” he asked. “You got to use your head, because it’s the closest thing. It’s lot easier to move your head than it is your whole upper torso.”

The philosophy isn’t letting the puck hit his head.

“I’m making sure my head hits the puck instead,” he said.

“You don’t create any holes,” he said. “You have your arms against your body and just cover all the net, then you use your head to pick up the rebounds.”

In Friday’ 3-0 preseason loss in Toronto, Ullmark dazzled against the Maple Leafs, stopping 32 shots, including one with his mask. While he didn’t headbutt the puck into the crowd, it appeared he wanted it to hit him in the head.

Of course, so many sports these days are focused on staying away from the head and preventing concussions. Does Ullmark worry about a head injury?

“No, I have great protection,” he said. “I switched masks a couple years ago. As long as it isn’t one-timed on my chin, I’m all good.”

Ullmark is also good with heading back to the Rochester Americans soon to begin his third North American season. After an AHL All-Star campaign in which he morphed into the Amerks’ backbone and MVP, it appeared he might graduate to the big league this season. The Sabres even gave the Vegas Golden Knights a sixth-round pick to lay off their top goalie prospect in the NHL Expansion Draft.

The Sabres, however, signed former backup Chad Johnson to a one-year contract to play behind Robin Lehner, meaning Ullmark is ticketed for the AHL again.

Ullmark has played for two bad Amerks teams, missing the playoffs both seasons. A year ago, he faced an astounding 1,678 shots in 55 games, both league highs.

But Sabres general manager Jason Botterill quickly rebuilt the Amerks and some of the organization’s depth during the summer. The AHL club could contend for its first playoff berth since 2014.

Ullmark believes the Amerks possess enough talent to go on a postseason run.

“I haven’t had a chance to play for the (Calder) Cup,” he said. “You always play for the Cup. Going down there again, I can only say positive things about it, because I feel like … we have a really good opportunity to actually be competing for the Cup.”

He added: “Five months of the summer is a long time, way too long. I want to have two, tops. That means I want something.”

So what can Ullmark get out of another AHL season? How can he get better?

“Oh, that’s very easy, just got to stop one more puck every night, keep that puck from going into the net,” he said. “That’s easily the biggest thing I felt during the season. I felt almost every night was one too many. Even though I played maybe like a ridiculously good game, maybe we lost 2-1. That was just one goal too much.”