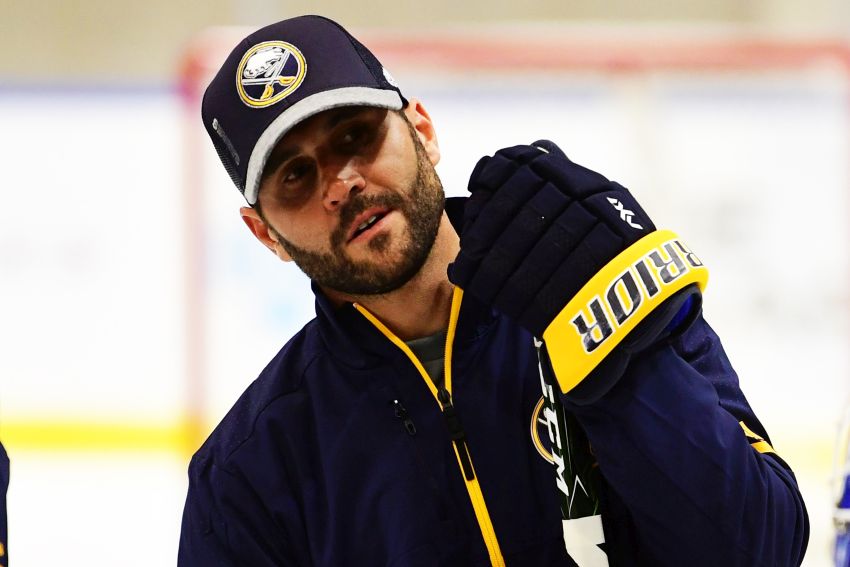 Given he’s generously listed at 5-foot-7, Gionta, who retired Monday, beat long odds to even get drafted by the New Jersey Devils out of Boston College in 1998. He wound up playing 1,026 NHL games over 16 seasons, winning the Stanley Cup with the New Jersey Devils in 2003, scoring 291 goals and captaining two franchises, including the Sabres.

Today, some of the NHL’s most dynamic players – take Johnny Gaudreau and Patrick Kane, for example – are among its smallest. St. Louis will be inducted into the Hall of Fame later this fall.

Nearly every team has at least one diminutive player on its roster whose height is bumped up a bit. The Sabres have two: 5-foot-8 center Kyle Criscuolo and 5-foot-9 winger Conor Sheary.

“You have a lot more guys that they’re open to, guys are drafted a lot higher now despite their size, and they’re given those looks,” Gionta said during a news conference inside KeyBank Center. “So hopefully I’m a small part of that.”

The Greece native takes special pride in hearing his career inspires others. His former teammate, Tyler Ennis, once said small players were a “brotherhood.”

Gionta will take a job with the Sabres, possibly a part-time gig helping out youngsters. He spent one day on the ice during the team’s development camp in late June.

The role seems natural for Gionta. Teammates always gravitated to him and lauded his professionalism. Several of them crowded into a cramped media room Monday to hear Gionta speak. So did Sabres general manager Jason Botterill and coach Phil Housley.

“He came to the rink and he was a pro every day,” said Sabres defenseman Nathan Beaulieu, Gionta’s teammate when he captained the Montreal Canadiens. “He had everything against him, he had every excuse in the book to say he wasn’t big enough or he wasn’t fast enough. He’d always seem to make it work.

“Consistency in this game is what keeps you around. For him to do it such a long time and him to be honored to be captain on a couple different teams is pretty special.”

While Gionta won a Cup and nearly scored 50 goals with New Jersey, he might be best remembered as the English-speaking captain of the storied Canadiens.

“Going to Montreal was one one of the biggest blessings for myself and my family,” Gionta said. “To be out of your comfort zone, going to a French-speaking area where your kids are going to a different school, and then to have them have the confidence in me that I was an English-speaking guy, could be the captain of that team, was pretty special to me.”

Gionta captained the Sabres three seasons, joining them in 2014, just months before they endured one of the worst campaigns in recent NHL history.

While he never helped the Sabres back to the playoffs, his presence always offered the club credibility. He played his 1,000th game late in 2016-17.

Last season, he captained Team USA’s Olympic entry before signing with the Boston Bruins. Following his 21-game stint in Boston, he said he knew he would retire and start spending more time with his family.

“I went into it hoping I could play one NHL game, and then from there it was play as long as you could and as long as you were having fun enjoying the game and your body holds up,” said Gionta, who still lives in Clarence. “Yeah, I never thought it would have lasted as long as it did. But I’m super appreciative for the people along the way that supported me and gave me that chance.

“They weren’t as readily available, the chances for smaller guys back in the day when I was coming through, and so I appreciate the people who maybe stuck their neck out.”

The Sabres will play a preseason game tonight against the Columbus Blue Jackets at Clinton Arena in Clinton, population 1,939.

The village in Oneida County won the right to host an exhibition game and $150,000 in rink upgrades through the NHL’s Kraft Hockeyville contest.

“It’s going to be a great atmosphere there, even at the pregame skate,” Housley said. “Obviously, we have business to take care of, but I just told the guys, ‘Enjoy the moment.’ It’s great to be part of such a big occasion, especially with U.S. hockey.”

Housley wants to dress as many American players as he can. Jack Eichel, the Sabres’ biggest U.S.-born star, is scheduled to play.

Eichel centered Sam Reinhart and Jeff Skinner during Monday’s practice, the first glimpse of what could be the Sabres’ No. 1 trio. Reinhart had been skating on other lines.

Housley said since the Sabres have three preseason games in four nights, including Wednesday in Pittsburgh, they’ve kept more players in training camp.