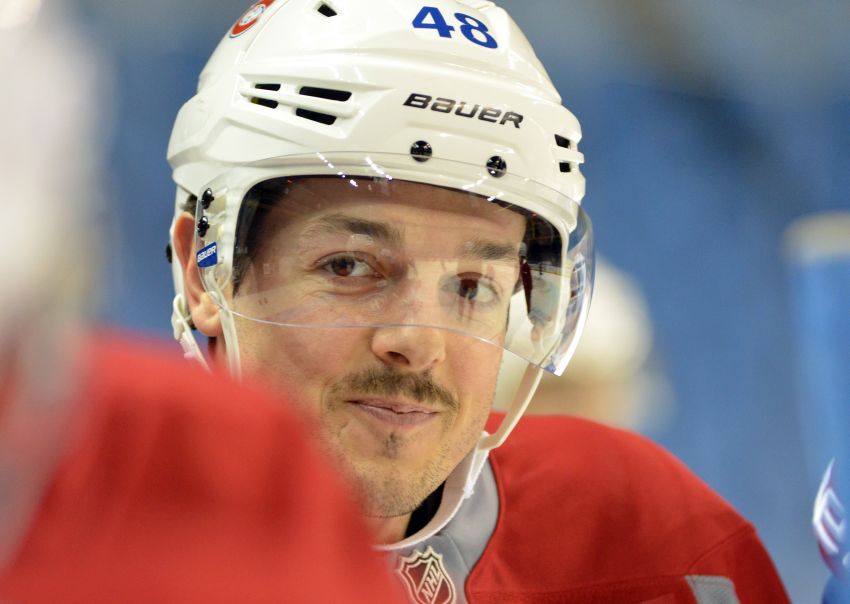 BUFFALO – Among the long-retired NHL talent and beer leaguers skating in the Corporate Challenge tournament the Sabres recently hosted, an undersized, boyish-looking 38-year-old with some slick moves and soft hands stood out.

The scene, in fact, looked pretty odd: former co-captain Daniel Briere, on the same ice he had once starred for the Sabres, playing in what amounted to an alumni game with some locals.

“I’m having a blast,” Briere said Feb. 10 inside the First Niagara Center.

His favorite part, naturally, is spending time with his three sons, which became difficult after Philadelphia bought him out in 2013 and he spent his final two seasons in Montreal and Colorado.

Briere also occasionally takes a little time to learn the ropes of hockey management beside Flyers president Paul Holmgren. He said someday he would like to work in an NHL front office.

For now, Briere, who splits his time between homes in Philadelphia and Florida, is happy “chasing the kids around” rinks all over the East Coast.

“My oldest (Caelan) is a senior in high school, so I know his time at home is coming to a close pretty soon,” he said. “So it was important for me to be there, be around him before he leaves. So I’m trying to soak it all in and enjoy it as much as I can.”

Despite limited roles with the Canadiens and Avalanche, a graying Briere treasured the end of his once-dynamic career. Before he played his final game here Dec. 20, 2014, the center talked about living in the moment and embracing what he had left.

“I had a pretty good feeling that it was going to be the end,” said Briere, who had eight goals and 12 points in 57 games last season. “(Avs coach) Patrick Roy was amazing. I loved how honest he was with me the whole time. I really enjoyed my time in Colorado. … Montreal was really cool, because it was a team I grew up cheering for. … It was a big thrill.”

Briere’s biggest thrills, of course, came in Buffalo, where he led two rollicking Sabres squads that reached the Eastern Conference final in 2006 and 2007.

The former first-round pick arrived late in 2002-03 from Phoenix as a virtual unknown. The deadline deal – the Sabres sent underachiever Chris Gratton to the Coyotes – probably ranks as one of the most lopsided trades of the last 15 years.

“It’s kind of where everything took off in my career … where things turned around, I really got my real chance to show what I could do, it was here,” Briere said. “That’s where I got a first taste of deep playoff hockey. I just wanted more and more, and our team just kept getting better and better.

“Unfortunately, we didn’t get to see what it could have turned out to be, but those few years here were amazing. I’ll always remember that.”

On two high-scoring teams filled with stars, Briere was perhaps the biggest and most popular.

“There was a lot of things falling into place at the right time for us,” Briere said. “The new style of (post-lockout) hockey fit in for our team. I thought the coaching staff, starting with Lindy (Ruff), really embraced the new rules (to open the game up) and tried to be ahead of everyone as far as not taking penalties, using the power play to our advantage.

“It really paid off for those first two years. To be part of that, there’s a lot of good memories.”