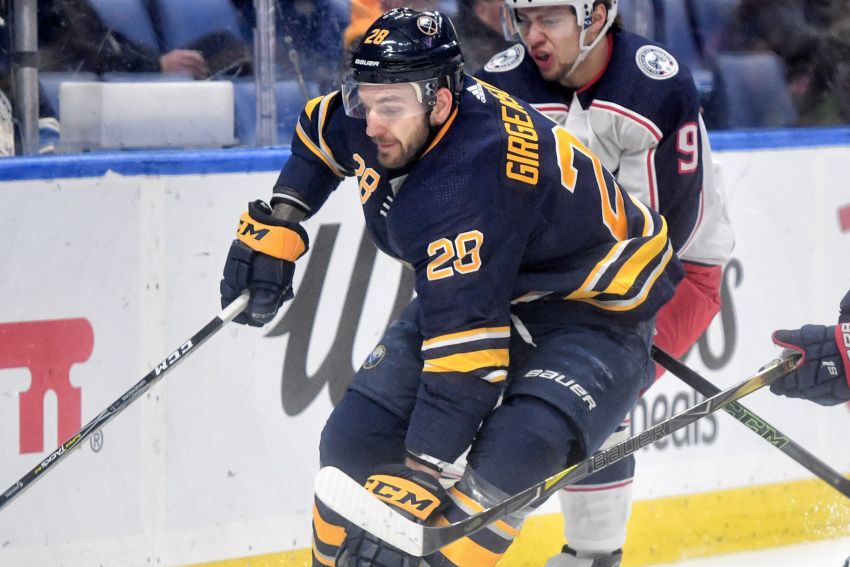 BUFFALO – Considering the Sabres drafted Zemgus Girgensons 14th overall and the scoring prowess he once showcased, the forward’s last few seasons could be considered disappointing.

Girgensons scored 15 goals in 61 games in 2014-15, the same season rabid fans in his native Latvia voted him into the NHL All-Star Game.

But that career-high goal total is deceiving. Girgensons, 24, skated on the first line much of his second NHL campaign. In an otherwise dreary year – the Sabres tanked and finished dead last – he looked like one of the franchise’s building blocks.

In reality, Girgensons is a third-or fourth-line checker and a strong penalty killer capable of playing center or the wing. Tenacity is possibly his greatest asset.

Girgensons has scored seven goals in each of the past three seasons, often going long stretches without producing any offense. Last year, he endured a 25-game drought.

Six seasons into has career, Girgensons understands his role.

“Forecheck, creating space, banging some bodies,” Girgensons said Thursday inside HarborCenter. “That’s kind of my role. At the same time, I do have to make some plays and finish some chances.”

He added: “Just whatever role I have to play on the team, I’m probably going to be able to do it. I’m that type of guy if a coach tells me to do something, I’ll do it.”

Girgensons thrived in his role as last season progressed. After starting sluggishly – he was a healthy scratch for the first time ever in December – his teammates voted him the Sabres’ Unsung Hero.

Still, Girgensons isn’t guaranteed a roster spot. While the Sabres will likely keep him given his experience and versatility, general manager Jason Botterill increased the depth over the summer, adding a slew of new forwards.

“You can see in every practice and every game he’s bringing that physical aspect that we need, he’s hard on (the) forecheck,” Housley said. “I think the new acquisitions … brought some internal competition. But Zemgus has been one of our most consistent guys day in and day out at the start of this camp.”

Internal competition has been scarce over the last several seasons. The Sabres’ tank seasons destroyed their depth. In the ensuing years, they struggled rebuilding it.

Right now, however, they have a surfeit of forwards. A veteran could get squeezed out.

“There’s more competition, there’s battles for a spot,” Girgensons said. “I got to battle for a spot. I’m leaving it out there every practice, other guys are doing the same. I think better competition for the guys, better mindset, just that approach that we want to be a winning team.

“I think everyone here has understood you have to change your mindset to be a better team.”

Girgensons experienced a lot of losing over his first five seasons, including three last-place finishes. But these days, he said everything on and off the ice “feels fresh.”

“Everything’s a little different, just the approach, the mentality,” he said. “I think … guys are going all out, everyone’s taking care of themselves. Practices are looking high-pace, the guys are really battling. You can see there’s some competition.

“That’s a good thing for a team to have. It pushes each other, no one can take a day off or you’ll be kind of out. So it’s definitely looking on the bright side here.”

He added: “If you don’t work, you’re probably not going to be here.”