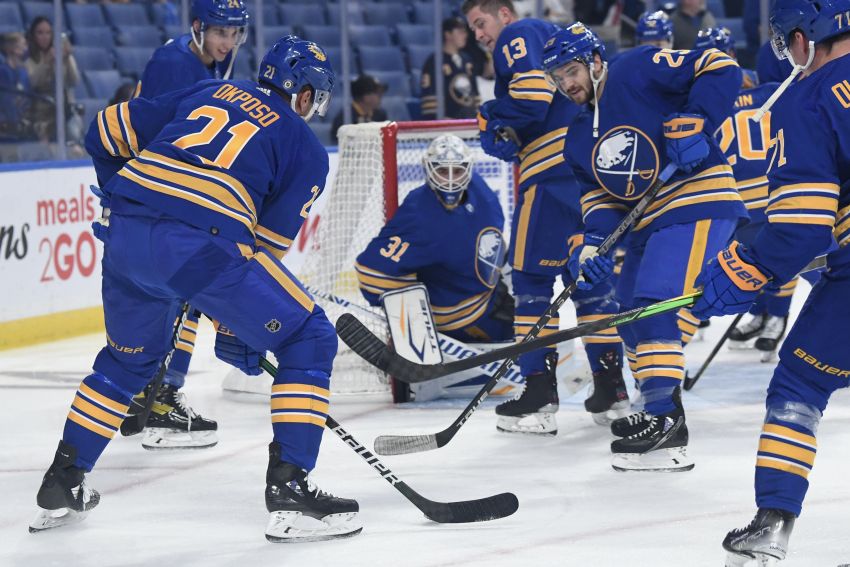 Dustin Tokarski (31) loves being around his Buffalo teammates. ©2021, Micheline Veluvolu

The 13-year pro has won two straight starts entering tonight’s game against the Calgary Flames at KeyBank Center, posting a 1.50 goals-against average and a .963 save percentage in those outings.

In Tuesday’s 2-1 win in Pittsburgh, Tokarski made 45 saves, including 19 in the third period as the Penguins fought furiously to tie the game. In Friday’s 3-2 victory, he thwarted the Edmonton Oilers’ late push, making 14 third-period stops.

Tokarski has registered a gaudy .971 save percentage during those third periods, cementing two critical wins.

Goaltending, which many observers believed would be the Sabres’ biggest weakness this season, has quickly become their greatest strength.

Tokarski, whose contract pays him $725,000 this season, beat out Dell, 32, for the backup job in training camp.

The Sabres have three terrific goalie prospects in Ukko-Pekka Luukkonen, Erik Portillo and Devon Levi, so they refused to make a long-term commitment to an established netminder during the offseason.

Before Anderson, 40, suffered an upper-body injury Nov. 2, he and Tokarski quietly formed one of the NHL’s best tandems. No NHL team pays its top goalies less than the combined $1.475 million the Sabres are giving Anderson and Tokarski this season.

Entering Wednesday’s NHL games, the Sabres’ team save percentage of .911 ranked 13th in the league. That number includes the .808 save percentage Dell compiled while allowing five goals on 26 shots in his season debut Saturday.

If you subtract Dell’s stats, the .920 save percentage Anderson and Tokarski have combined for would rank fourth.

How much has the Sabres’ goaltending improved? The six goalies they used last season compiled an .896 save percentage, an awful number than ranked 27th.

Tokarski will almost certainly keep earning the most of the starts until Anderson recovers from his upper-body injury.

By now, Tokarski’s story has been well documented. He hadn’t played in the big leagues since 2016 and hadn’t earned a win since 2015 before registering a 2-8-2 record in 13 outings with the Sabres last season.

“He battles (in games) and the same thing in practice,” Granato said. “It’s not like he prepares himself for the game in the sense of preserving him, being conservative. He sees, uses practice as I have to get better, I have to engage fully. Sometimes you worry he might be going too hard in practice.

Tokarski, who has played 363 games in the minors, said he doesn’t “take a single day for granted” in the NHL.

“I come in, enjoy my teammates, hang out with them and work hard on the ice,” he said. “It’s the top league in the world and I’m thrilled to be here.”