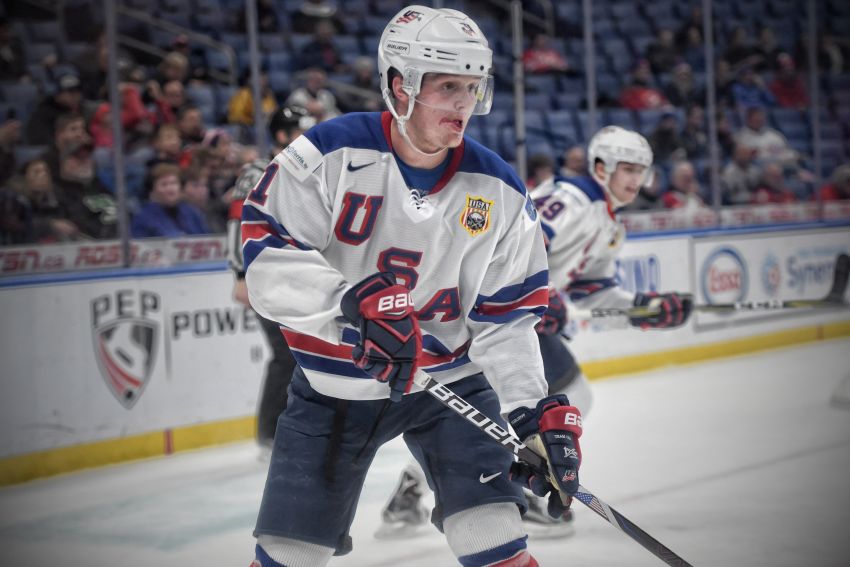 TORONTO – Even among the established NHL talent on the ice during those morning skates last summer in Minnesota, Buffalo Sabres prospect Casey Mittelstadt’s skills stood out, even turned heads.

“We skated Mondays, Wednesdays and Fridays at different rinks, five-on-five,” Sabres winger Kyle Okposo said this afternoon, shortly after the center signed a three-year, entry-level contract. “That pace, that’s the highest pace that I’ve played in the summer and he was really impressive there. I had guys on the bench saying how special of a player he was and how special his mind was for the game.”

Suddenly, the final two weeks of a miserable season are intriguing.

Sabres coach Phil Housley said he wants to play Mittelstadt as soon as possible. Housley expects him to arrive in Buffalo tonight or Tuesday. After tonight’s tilt against the Maple Leafs, the Sabres host the Detroit Red Wings on Thursday.

Update: Sabres general manager Jason Botterill said late this afternoon that while nothing is official, the plan is for Mittelstadt to debut Thursday at center.

Botterill the Sabres talked to Mittelstadt throughout the season and again recently after Minnesota failed to quality for the NCAA Tournament.

“We wanted to talk to him a little bit where his head was at and what he wanted to do moving forward with his career,” he said. “(We) spoke with him a few times throughout the week and then gave him a couple days to figure things out over the weekend.”

Over the weekend, Botterill said Mittelstadt called and said he’d like to move forward.

Mittelstadt can’t play in the AHL this season. Botterill said he hopes Mittelstadt can play with Team USA at the World Championship later in the spring.

Mittelstadt’s ability to quickly create separation and showcase his talents at a high speed impresses Housley.

“He does things at a high speed level, whether it’s shooting, he gets his shot off quick, his first three or four strides out of the gate are really good,” Housley said. “That’s how he creates his separation and he’s got great vision to make plays. It’ll be interesting when he gets here to see him and talk to him and see how he’s going to be part of our team.”

“It’s a whirlwind,” Okposo said. “You’re living this dream and you have this life and you’re in college and you start to get comfortable there. He was there for one year. Then all of a sudden, you turn pro and you’ve got to get used to a whole new thing. …

“I don’t think he’s been away form home, really. Then you go to Buffalo, New York, new state, new city. It’s definitely a time in flux in your life.”

Update: Playing for the Sabres will burn the first season of Mittelstadt’s contract, according to TSN’s Bob McKenzie. The deal has an average annual value of $925,000.

In other news, Sabres goalie Linus Ullmark will start tonight. Chad Johnson, who missed two games after a puck hit him in the head last week, will back him up.

Update: Ullmark isn’t on the ice for warm-ups. Johnson will start. Goalie Robin Lehner will back him up.