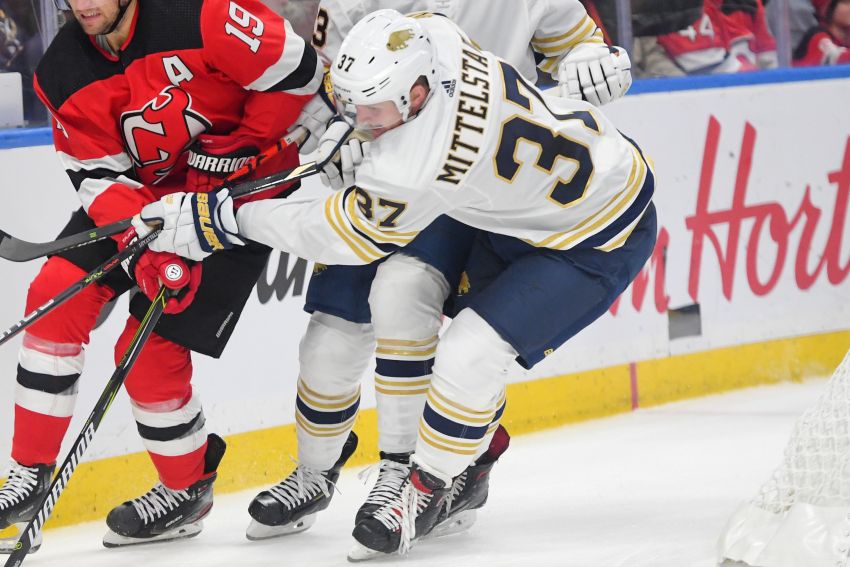 TORONTO – On Sunday, a day off for the Buffalo Sabres, general manager Jason Botterill and coach Ralph Krueger summoned center Casey Mittelstadt to KeyBank Center to inform him he was being demoted to the Rochester Americans.

After Mittelstadt, 21, got over the initial shock and disappointment of getting sent to the minors – “It’s always an emotional conversation,” Botterill said Monday – he asked what he must to do return to the NHL.

“He is a mature guy, he is a realist,” Sabres winger Kyle Okposo said of Mittelstadt. “I think he’s able to look at the situation objectively and probably think that it might be best for his development to go down there. So I think that that definitely helps, his ability to step back and look at things in a bigger picture.”

Botterill said: “What I liked was his initial respect for the American Hockey League level and the excitement of going and playing.”

Having jumped from the University of Minnesota to the Sabres in March 2018 following his freshman season, Mittelstadt started a new adventure Monday. The former eighth overall pick has never played in the AHL.

“Once I was out for a couple games in a row I thought it could happen,” Mittelstadt told reporters Monday in Rochester. “I was obviously still surprised by the move.”

Mittelstadt said a lot people have texted him and said they’re sorry he got sent down.

“I’m not upset about it,” he said of coming to Rochester. “I’m ready to be here.”

While Mittelstadt possesses loads of skill, he has endured a rough campaign, struggling to produce offense while looking raw defensively.

Mittelstadt has mustered just one goal and two points in his last 21 contests and endured a 16-game goal drought before scoring Nov. 29. Overall, he has compiled only four goals, nine points and a minus-5 rating in 31 games this season.

After sitting out three of the last four games as a healthy scratch, the Sabres decided Mittelstadt, who has made 114 NHL appearances, must play games.

“That’s the single most important thing here at that age is to get the reps and to get the minutes,” Krueger said. “As soon as he became a candidate for getting scratched, we needed to think about what was the best for him as an individual combined with that, which we need as a team long-term.”

Botterill said Mittelstadt has been “all-in.”

“His attitude in practice, after practice, with our coaching staff has certainly been good,” he said. “But after sitting out a few games, I wanted to make sure leading into the break that he was playing games and continuing his development from that standpoint.”

He added: “The fact that he can get his mind wrapped around what do I have to do to improve my individual game shows a lot of maturity on his part.”

Botterill wouldn’t put a timetable on how long Mittelstadt could stay in the AHL. He will almost certainly stay at least through the weekend.

As the Sabres prepare for tonight’s game against the Maple Leafs, Mittelstadt will be riding a bus to Binghamton. The Amerks play a road game against the Devils on Wednesday before hosting Binghamton on Friday and the Utica Comets on Saturday.

The Amerks offer Mittelstadt a unique opportunity. Considering he has significant NHL experience, he could be a dominant AHL player. His stint could certainly help him generate confidence.

“Casey has the opportunity now in Rochester with a little more time and space to work on these things (he must improve) and to get more reps, more minutes to continue to work on his habits,” Krueger said. “He’s a very young player, there’s a lot we ask for for somebody who’s eventually going to be an important piece of our team as a centerman in the National Hockey League. We just all found for his development this is the right place to be.”

Joining the Amerks reunites Mittelstadt with coach Chris Taylor, who subbed as an assistant in Buffalo earlier this season while Don Granato recovered from pneumonia.

Taylor, who often worked one-on-one with the youngster, saw some of Mittelstadt’s best outings, including an early three-game stretch in which he scored three goals and five points.

“Just having (Taylor’s) knowledge is certainly going to help him out in getting Casey back up to the National Hockey League,” Botterill said.

Clearly, the Sabres did not want to make the same mistake two consecutive years. Last season, they kept winger Tage Thompson in Buffalo for 60 games as he struggled, occasionally scratching him. Mostly, however, the prospect skated short minutes.

When the Sabres finally sent him to Rochester in late March, Thompson started piling up points. After starting this season with the Amerks, Thompson played so well he earned a promotion last month.