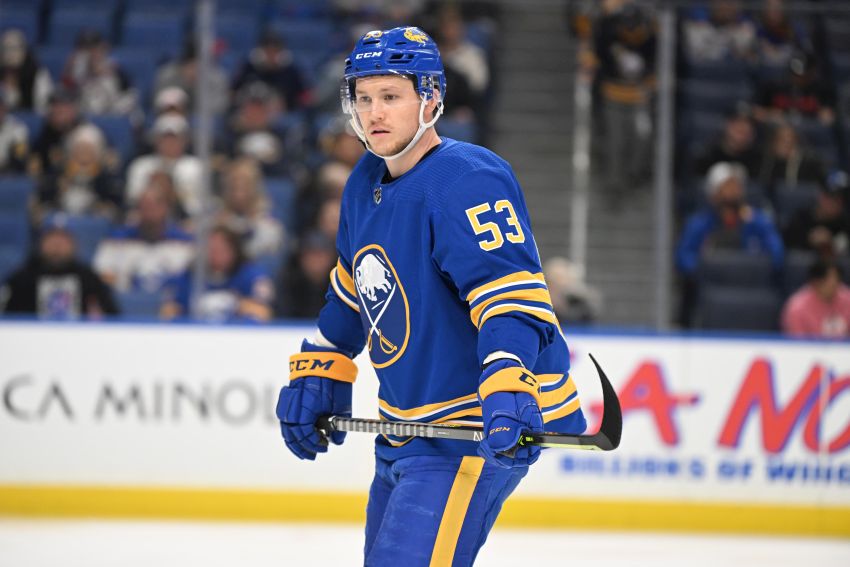 Jeff Skinner has been one of the NHL’s hottest scorers. ©2022, Micheline Veluvolu

But players Skinner’s age, 30, rarely showcase much growth. At that stage, they’re often nearing the end of their prime or past it.

Skinner has scored at least 31 goals five times in his 13 NHL seasons, including a career-high 40 in 2018-19, his first campaign with the Sabres.

The bar is high for what would qualify as a career-best season.

Still, if Skinner keeps up his torrid production, he would not only set personal highs for goals, assists and points, he would enjoy one of the greatest offensive seasons in the Sabres’ 53-year history.

Through his first 29 contests this season – he recently served a three-game suspension for cross-checking – Skinner has compiled 16 goals and 20 assists for 36 points. That’s a 44-goal, 54-assist and 98-point pace over a full campaign.

He has never registered more than 32 assists or 63 points (four times, coincidentally) in a full season.

Skinner started slowly this season, recording two assists in the first six games. But since Oct. 27, his 16 goals and 34 points rank 11th and ninth, respectively, in the NHL.

In his last eight outings, he has scored seven goals and 15 points. Remember, in 53 games during the turbulent 2020-21 season, he mustered just seven goals and 14 points and was a healthy scratch.

Back then, Skinner’s days as a top-line offensive talent seemed over. Now, his name might rank among legendary Sabres like Danny Gare, Pat LaFontaine and Rick Martin on the single-season scoring list.

So, how has Skinner elevated his play to such an elite level?

For starters, he has developed dynamic chemistry with his linemates, center Tage Thompson and Alex Tuch.

“Any time guys are having success individually it’s because the team’s playing well, our line’s clicking well,” Skinner said following Thursday’s practice at LECOM Harborcenter. “So that’s probably the No. 1 thing that sticks out for me.”

Skinner’s line has morphed into perhaps the NHL’s most lethal trio, combining for a whopping 57 goals and 121 points through 32 games entering the league’s Christmas break.

“The chemistry they built is energizing,” Sabres coach Don Granato said . “That would energize anybody.”

That energy, of course, likely vanished as Skinner struggled two years ago. But under Granato, who took over during that wretched season, the Sabres quickly grew into a tight-knit group. Coming to the rink became fun again.

As a result, some players beaten down by the constant losing and turmoil, including perhaps Skinner, seem to have been reinvigorated.

“The hope is they feel the same passion they did when they were 5 years old and playing with nobody watching them and thinking about playing in the NHL, that type of energy and passion, and find that within them each day,” Granato said. “And lots of guys have identified more with that, just the pure joy of playing and having fun playing and competing. These guys are very competitive people and they connect with just compete.

“It got (Skinner) in trouble a little bit with Pittsburgh (with the cross-check), I think, but it’s sort of the same type of dynamic. Just play, immerse yourself in a love and passion of the game. And when you can do that with a guy with his talent, he’s enjoying it as much as he’s enjoying it, I think your question’s pretty much answered there (as to how he elevated his play).”

Sabres captain Kyle Okposo echoed Granato, saying Skinner, who always seems to be smiling, is simply “having a lot of fun.”

“You just see the way that his personality is coming out and you see how much fun he has at the rink on a day-to-day basis,” he said. “It’s honestly a joy to see, joy to witness.”

As the 5-foot-11, 197-pound Skinner has piled up points, Okposo said he has also “stepped up in a leadership role,” saying the right things to the NHL’s youngest team.