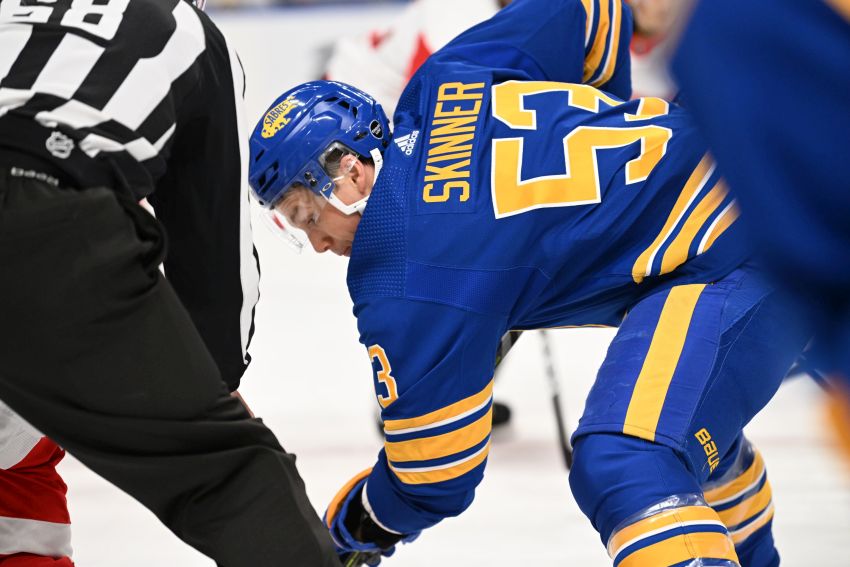 Why is that unusual? Well, only three times in 12 NHL seasons – in his first two years and again in 2017-18 – has Skinner finished with more assists than goals.

Over his career, Skinner, an aggressive, shifty presence, has scored 300 goals and registered 252 assists. He’s known more for his goal-scoring prowess than his playmaking skills.

It’s early, of course, but at his current pace after recording two more helpers in Wednesday’s 6-3 win over the Pittsburgh Penguins, he would produce 66 assists over a full campaign.

“You’re always trying to expand on your game, try to improve different parts of it,” Skinner said prior to the game at KeyBank Center. “For me, that’s something I kind of focused on the last couple years.”

Skinner, 30, compiled a career-high 32 assists as a rookie but did not crack 30 again until last season, when he also scored 33 goals and 63 points, tying his career high.

His ability to create more plays can be attributed to a few factors.

He has spent most of the past year playing left wing with center Tage Thompson, developing strong chemistry beside one of the NHL’s budding stars.

Skinner created Thompson’s third goal in Monday’s 8-3 win over the Detroit Red Wings, feeding him a nifty backhand pass from the left boards.

“Playing with Tommer … you’re going to get some assists when you give him the puck,” said Skinner, who had seven assists in 53 games in 2020-21.

Skinner’s high assist total – he was one of five Sabres who had a team-high six entering Wednesday – can be traced to two other things, Sabres coach Don Granato said: tenacity and experience.

“Determination, absolutely determination,” he said. “The skill comes out with him the harder he goes. You have to be selective, he can’t run around the ice and finish hits and chase pucks. But he’s developed enough, he’s got enough hockey sense, intuition to know when he should be going and turn up the throttle. When he’s not, he’s maintaining good, steady positioning to defend well, to slow the opposition. He puts himself in a good spot to get the puck back.”

Skinner, who has two assists in each of the last three contests, got off to a slow start this season, scoring his first goal last Thursday, the Sabres’ seventh game.

“My first couple games weren’t as good as I wanted them to be,” he said. “You kind of sort of get into it and get into the rhythm of the season. I think the last few games I’ve felt a lot better.”

At his current pace, he would play 57 times this season.

Of course, Comrie, 27, handled the load in junior and the minors as his team’s starter.

“He’s a worker,” Granato said. “He’s accustomed to that. He pushes and creates a high workload for himself. Even in practice he’s out there early, he stays late. And he’s been in the league long enough to know that the grind of lots of games, whether he’s played them or not, he’s had to be ready to play every one.

“And he prepares like he’s playing, regardless. So it’s early but he has the habits and traits of someone that can endure.”