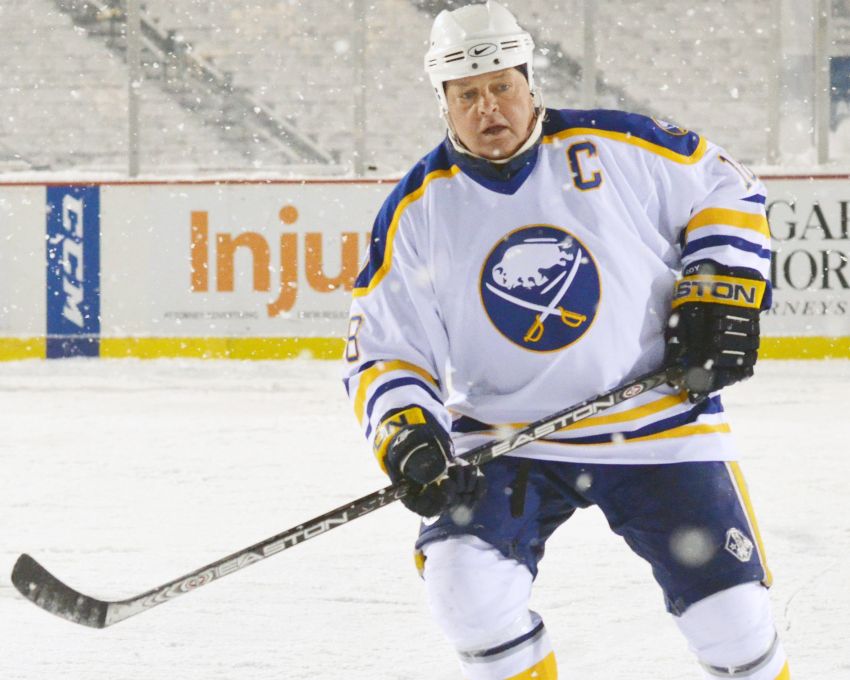 That night, after all, was supposed to be about Rick Martin’s pursuit of the milestone. The sniper needed to score just once to reach 50 goals for the third consecutive season.

Gare, meanwhile, had scored 47 times entering the season finale on April 4, 1976 against the Toronto Maple Leafs at Memorial Auditorium.

“I was close, but I never thought I’d get it, you know?” said Gare, one of 15 former captains the Sabres honored as part of their 50th anniversary celebration before Saturday’s home opener against the New Jersey Devils.

All the attention, Gare said, was focused on Martin.

Gare wasn’t yet. Sure, the diminutive winger was within striking distance. Yes, he had recorded two hat tricks earlier in his second NHL campaign.

But would Gare really score three times that night?

Few probably expected someone could score 50 times on a checking line. But the trio of Gare, Don Luce and Craig Ramsay produced an incredible amount of offense while shadowing the opponent’s best every night.

Luce and Ramsay’s defensive skills combined with Gare’s scoring prowess made them as lethal as almost any No. 1 line.

“We tried to play in the other end,” Gare said. “It’s kind of funny. That’s normally what the top lines would do.”

Gare hadn’t thought much about scoring 50 goals until Fred Stanfield approached him before the game. Having played beside Boston Bruins legends Johnny Bucyk and Phil Esposito, the veteran knew all about the special number.

Stanfield’s encouragement made Gare start believing he had a chance.

Then, according to Gare, everything changed prior to the opening faceoff. His trio lined up against Darryl Sittler, Lanny McDonald and tough guy Dave “Tiger” Williams.

“(That was) the turning point in all this,” Gare said.

Gare knew Williams – “He’s a pain in the (butt),” he said – from their junior days in the Western Hockey League.

Williams told Gare he wouldn’t “get a sniff tonight at 50.”

The Aud buzzed all night in anticipation of something special happening.

Stanfield assisted on Gare’s 48th goal in the second period. After that, Gare said Sabres coach Floyd Smith finally put him on the power play.

Gare deflected Martin’s shot in for his 49th in the third period, a goal many thought Martin had scored.

As the game progressed, Smith started putting Gare and Martin out with top center Gilbert Perreault.

Perreault had no idea what to do.

Ironically, Gare buried a rebound from Martin’s shot on the power play for his 50th, the final goal in a 5-2 win.

After Gare’s teammates mobbed him on the ice, he skated by Toronto’s bench and flipped the puck in the air as he passed Williams.

Gare said Martin, who didn’t score, was gracious after he joined an exclusive club. Only four Sabres – Gare, Martin, Pat LaFontaine and Alexander Mogilny – have scored fifty goals. Gare, who scored 56 goals in 1979-80, and Martin both did it twice.

“Those guys are like iconic to me,” Gare said. “To be named amongst them in the 50-goal club, you’re grateful.”

Perreault, the most iconic of Sabres, said facing the Montreal Canadiens and the legendary Jean Beliveau in Buffalo’s first home game on October 15, 1970 is his most vivid memory of the team’s first season.

“I thought I was going to play against my idol Jean Beliveau that night, but I didn’t have a chance to play one shift against him,” Perreault said inside KeyBank Center. “But it was a great challenge playing against the Montreal Canadiens. Being from Quebec, Montreal was are our team, and I was looking for that game.”