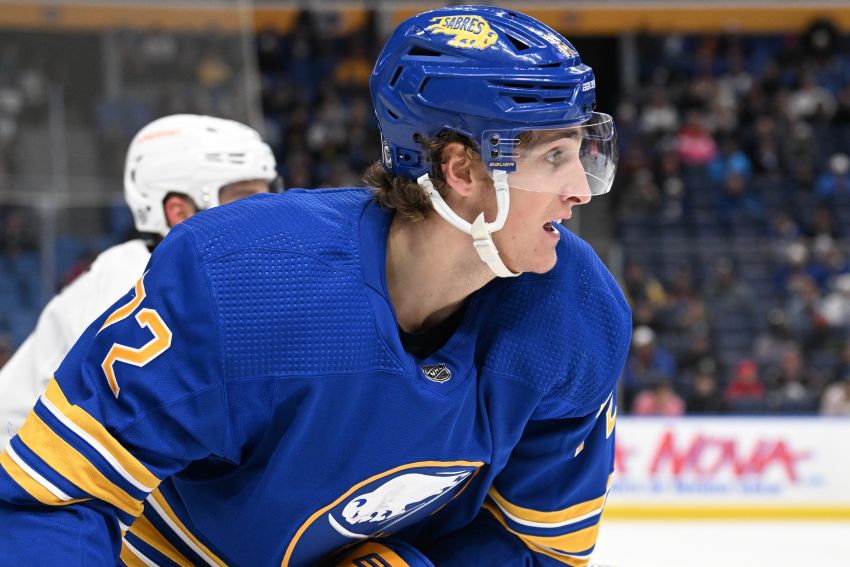 Moments earlier, Chris Dierken, the team’s director of media relations, had handed him every puck Thompson scored with during perhaps the greatest individual performance in the franchise’s 53-year history.

Granato kept two pucks wedged in each each pocket and another in his hand as he prepared to present them. Dierken labeled each one.

Thompson said he thought Granato would just pull out just one, but the pucks kept coming.

“I don’t know what we would have done if he got the sixth late,” Granato joked following Thursday’s practice at KeyBank Center.

For Granato, having also coached Thompson in junior and watched him struggle in the NHL, the impromptu postgame “ceremony” at Nationwide Arena held special meaning.

Before Granato took over nearly two years ago, Thompson often sat out as a healthy scratch and looked like he would never realize his enormous potential. On Wednesday, he scored four times before the first period ended.

“It was pretty special to be able to do that at the highest level in the NHL,” Granato said after the Sabres prepared for this weekend’s home-and-home set against the Pittsburgh Penguins. “To know and watch how many hours and obstacles Tage Thompson has put in and overcome made it really special to be handing them to him.”

Thompson, 25, is the NHL’s hottest player, having recorded a whopping eight goals and 13 points during his five-game point streak. He has scored 21 goals and 40 points through 26 games, an incredible 66-goal, 126-point pace over a full season.

Those gaudy numbers would rank as the second- and third-highest, respectively, in franchise history, trailing only Alexander Mogilny (76 goals and 127 points in 1992-93) and Pat LaFontaine (148 points in 1992-93).

References to that rollicking team from 30 years ago could become common if Thompson and the Sabres keep scoring at a torrid rate. They’ve scored an NHL-high 104 goals this season, an average of four a game. They’ve scored at least four goals in five consecutive contests for the first time since 2006-07.

With the 6-foot-6, 220-pound Thompson serving as the catalyst between linemates Jeff Skinner and Alex Tuch, the Sabres are on pace to score 328 goals over 82 games. They haven’t boasted an offense that prolific since they scored 335 times in 1992-93.

Thompson never doubted he would become a star. He’s not cocky, mind you. He just possesses a lot of confidence. He carried it through all the adversity he endured – limited opportunities, a demotion to the minors and a season-ending injury – until his breakout 38-goal season in 2021-22.

“There’s always outside noise and you want to block it out,” Thompson said. “Obviously, you can’t block it all out and it gets to you at some point. But I don’t think there was ever really a point where I had self-doubt, I always knew what I was capable of and I always believed in myself.”

He knew his time would come.

“He’s always been this calm guy,” Sabres defenseman Rasmus Dahlin said. “Even I remember (four years ago), he kept it going, he didn’t care, he was on his journey. He knew he was going to be the best player in the league.”

Granato said someone recently asked him about Thompson being “down” as he struggled to score and carve out a role.

“He was never down,” he said. “That’s the big difference. That’s a whole trait of difference. He was battling. He was committing more. He was finding ways to add to his game to make his game better. All of the drama we want to put into it and say hardship, the guy was behind the scenes doing all the right things. He just needed opportunity.

“We all need opportunity in life. You can train all you want. Somebody has to give you an opportunity in any business anywhere. I saw a guy that was doing all the things and just needed opportunity. I had the hindsight of five years or more with him at that point.”

Granato promoted him to a scoring role late in 2020-21 before shifting him from right wing to center at the beginning of last season, a move that opened him up and ignited his career.

“I believed that I could be at this point, that I had this potential,” Thompson said. “Then there’s other people around me in this room that believed in me, too. And I think, obviously, Donny is a big factor in that, gave me a big opportunity to showcase that I can do it. I don’t think there was any question. Obviously, there’s a lot of tough, tough years before. And those are just things you’ve got to work through.

“It’s adversity and, at the end of the day, any time you go through adversity, it makes you a better person, a better player. That’s kind of the thing I tried to focus on as I was going through those times is, when you get through it, you’ll be better so you’ll be better off for it.”

Donny G with the deep pockets 😂