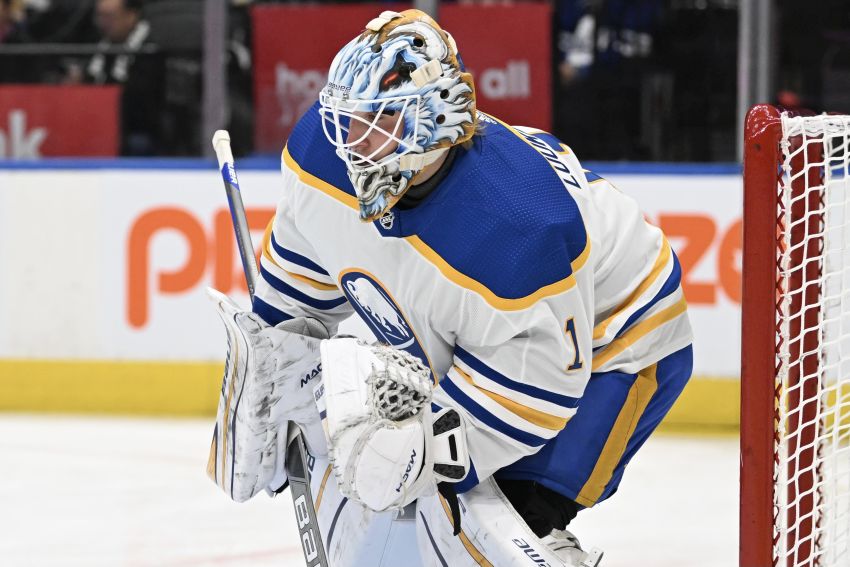 BUFFALO – Ukko-Pekka Luukkonen needed time to adjust. In his first outings after the Sabres recalled him, the goalie occasionally looked a little wonky.

The Finn wasn’t much of a difference-maker.

Luukkonen, 23, had played just 13 NHL games, the last coming more than 10 months earlier, before Eric Comrie’s lower-body injury thrust into the starting role in late November. Having been labeled as the Sabres’ goalie of the future, when he’s summoned to Buffalo, he’s expected to make an immediate impact.

“You’re recalled from Rochester and now you’re facing the greatest shooters in the world,” Sabres coach Don Granato said following Wednesday’s practice at LECOM Harborcenter. “… It’s different, the timing’s different, everything’s different. And there’s an acclimation period, especially for younger players that don’t have a lot of NHL experience. And I felt he went through that window through early games and had some frustration and goals he probably wanted back.

“The key is that you don’t want those to affect his confidence, don’t want doubt to creep in, all the while everybody around him is second-guessing him.”

These days, no one seems to be second-guessing the 6-foot-5, 217-pound Luukkonen. He has performed dynamically in his last two starts, posting a 2.00 goals-against average and a gaudy .952 save percentage while morphing into the Sabres’ backbone.

“A little bit of dominance, honestly,” Sabres winger Alex Tuch said of what the rookie has recently shown him. “He was super comfortable, he was aggressive, he was controlling the puck, controlling shooters, honestly. There wasn’t any mishaps, there wasn’t any times when we were like, ‘OK, like we got to help him out’ or anything like that. He was bailing us out and it gives us confidence.”

In Monday’s 3-2 win in Vegas, Luukkonen made 21 of his career-high 41 saves in the third period as the Golden Knights fought furiously to tie the contest.

At the 13:03 mark, he calmly stayed with Jonathan Marchessault during his penalty shot, making an easy save after forcing him to the outside.

“The Vegas game was the best game I’ve seen him play so far,” Tuch said. “The penalty shot, it was like he’s been there 100 times before.”

In last Thursday’s 4-2 win in Colorado, Luukkonen made 15 of his 39 saves in the third period as the Avalanche roared back and crept within one goal.

“You learn a lot from those and certainly you have to kind of enjoy those moments and kind of embrace it,” Luukkonen said of the heavy third periods he has experienced. “We’ve been playing well to put ourselves ahead in those games, so kind of make the most out of it and play well as a team. And I feel like we have done that and defense has been solid even though there’s a lot shots. They box out guys and take the sticks away, so that help my job, (makes it) easier.”

Over the past month, Luukkonen said he has simply grown “more comfortable with the speed of the game and how it’s played here in the NHL.”

“Being more comfortable with the pace and through that just being more and more confident, too,” he said. “I think that’s been key.”

He added: “Coming from the AHL, I feel like how I played there necessarily, you can’t play exactly the same way. I have to challenge the shooters more here and be more aggressive maybe a little bit.”

The best performances of Luukkonen’s career coincided with Comrie’s recent return to practice.

In his first seven starts, Luukkonen compiled a 3-3-0 record with a 3.86 goals-against average and an .866 save percentage. Barely a week ago, sending him back to the minors would’ve been the most likely scenario when Comrie was healthy.

But what do the Sabres do now? If Luukkonen keeps maturing and performing as well as he has over the past week, can they really assign him to the Rochester Americans? He has certainly made a strong case to stick around.

General manager Kevyn Adams said on Wednesday the Sabres will look at possibly carrying three goalies – veteran Craig Anderson has served as the backup all season – on the roster. That scenario that rarely works out well because playing time becomes limited.

The Sabres would have to make a roster move to keep an extra goalie.