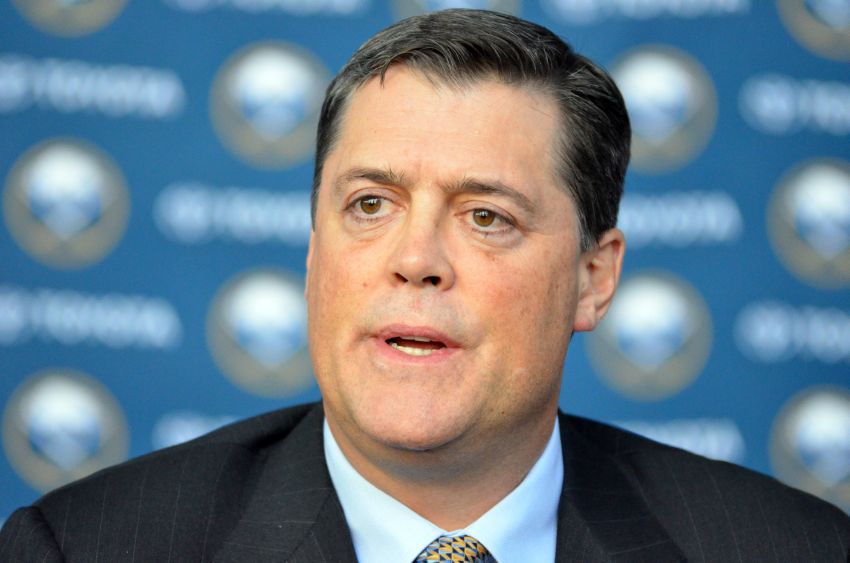 BUFFALO – Joining the Sabres wasn’t on Pat LaFontaine’s radar. The legendary Hall of Fame center, whose No. 16 hangs in the First Niagara Center rafters, had just settled into a new job with the NHL.

But LaFontaine’s gig as the league’s vice president of hockey development recently brought him to a concussion conference in Florida, where he met with Sabres owner Terry Pegula, whose team has become a laughingstock this season.

Pegula and LaFontaine went out to dinner about 10 days ago. The Sabres never came up. Eventually, on Pegula’s boat later on, the billionaire mentioned his hapless club.

“He started to get into where he thought I could help the team,” LaFontaine, the Sabres’ new president of hockey operations, said Wednesday while discussing his new role. “I wasn’t expecting that whatsoever.”

LaFontaine wasn’t sure if Pegula was serious, so he waited.

“I wanted to see,” LaFontaine said. “I wasn’t sure if he really wanted to go, and I can tell you when he made up his mind, then it was a process of carving out the right roles and the hierarchy.”

LaFontaine’s now at the top of that hierarchy, with Wednesday forever living as one of the most shocking days in the Sabres’ 43-year history.

In addition to hiring the franchise icon, the 4-15-1 club fired Darcy Regier, the general manager since 1997, and Ron Rolston, who lasted seven months as the regular coach. Both were informed following the Sabres’ 3-2 shootout win against the Los Angeles Kings on Tuesday.

LaFontaine’s first move was bringing back popular former Sabres coach Ted Nolan as the interim man the rest of the season.

“Terry said to me, ‘If you think (Nolan’s) that good and if you think he can help this organization, (do it),’” said LaFontaine, who played two years under Nolan. “So he’s putting his trust in me right away.”

LaFontaine vouched for Nolan, telling Pegula players need to know “there’s going to be a change on their part of this.”

“I said, ‘There’s one guy I know that can do this, and he’s probably never been given a truly, truly chance,” LaFontaine said about Nolan, the 1996-97 Jack Adams Trophy winner. “The guy was Coach of the Year one time.”

Nolan, who turned down a one-year contract from Regier in 1997 after feuding with former general manager John Muckler, broke down while discussing his return.

He added: “There was some times where I thought maybe I wouldn’t get that chance again.”

Bringing back two special names from the past will almost certainly restore some hope to the team’s angry, disenchanted fan base.

Now, the 48-year-old LaFontaine must find a new GM, a job Pegula originally wanted to give him.

What are those strengths?

“I know people out there who know how to do the job, and I think putting together the right people to build that team and then putting them together, I think that’s my strengths,” LaFontaine said.

LaFontaine will be working closely with scouting director Kevin Devine. There’s no timetable for a GM hiring.

Why now? Why didn’t this happen when Pegula purchased the team in 2011 or when the Sabres missed the playoffs the last two seasons? Why not a few weeks ago?

Pegula added: “One thing I’ve always done my whole life, when I work with people, I dedicate all my efforts to try to make them successful. I am a people person.”

But Regier was wildly unpopular and had created the NHL’s worst team. Fans chanted for his firing nearly every home game. His statement in April about the fans enduring “suffering” in order to win a Stanley Cup began haunting him as soon as the rebuilding Sabres started losing.

“I wouldn’t use that word,” LaFontaine said about suffering. “I would use ‘patience’ and understand that there’s a direction. If the fans know there’s leadership and direction and they know there’s good people in place … they’re going to support it.

“The fans here in Buffalo, they’re smart. They know hockey, they know people.”

LaFontaine, who played in Buffalo from 1991-97, finds motivation trying to bring a Cup to Buffalo.

“I can’t think of a better city in the United States or North America that deserves a championship more,” he said.

He added: “I know this town. I know this city. I know the passion. They’re going to get the same from me in my job. I guarantee. I’ll give them everything I have to the hockey department and on the ice.”