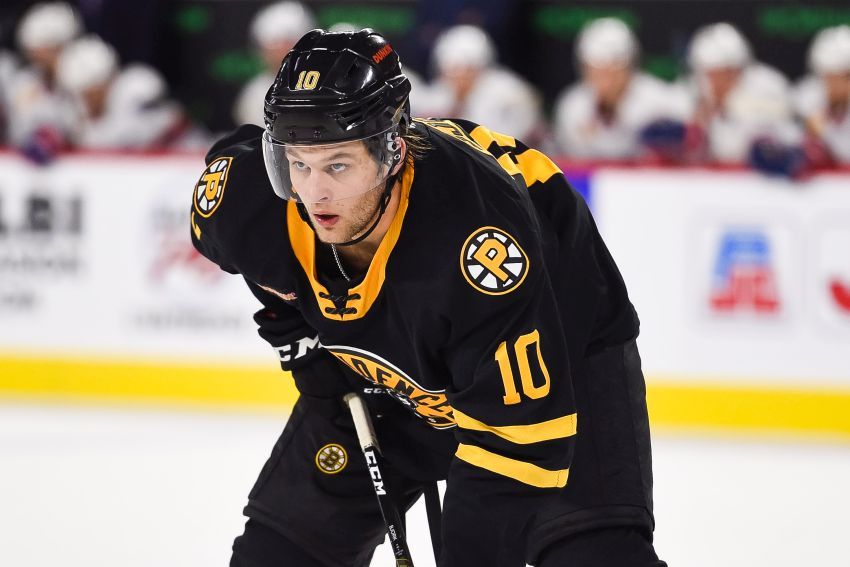 Four seasons into his NHL career, Buffalo Sabres newcomer Anders Bjork said he is still trying to establish an identity.

Two shoulder surgeries and a brutal concussion stymied the 6-foot, 197-pound winger’s development with the Boston Bruins. This year, he fell out of the lineup, becoming a healthy scratch.

So when the Bruins traded Bjork, 24, to the Sabres on Monday in the Taylor Hall deal, he welcomed a change of scenery.

“I was excited, for sure,” Bjork said on a Zoom call prior to making his Sabres debut in Tuesday’s 3-2 shootout loss to the Bruins at TD Garden. “There’s opportunity. It’s a fresh start for me. I don’t think my time in the NHL has gone the way I wanted it, but this is a great opportunity for me to start over and begin working even harder to become the player I believe I can be.”

Bjork couldn’t hide his excitement over joining the Sabres.

Interim Sabres coach Don Granato knows all about Bjork, having coached in Team USA’s National Team Development Program when he was coming up in the program.

While Bjork never played for Granato, he said talking to him Monday night offered him a “feeling of comfort.”

“Very familiar with his game,” Granato said. “He plays a very high-speed, high-tempo game. He has a lot of skill.”

Bjork, who recorded an assist on defenseman Colin Miller’s goal 1:52 into the game, said he plays a “hard and smart” style.

“My speed is an asset, for sure, and something that I’m trying to use in the right way and find better ways to use it and everything,” he said. “I’ve played a lot of different roles and I think that’s another asset. I can play a versatile role.

“I have some offensive ability and I want to learn and develop into a more offensive player and score more goals.”

Sabres general manager Kevyn Adams said: “We see an offensive upside chance with a role that could expand in our team. So he’s a guy that we identified and liked what he brought.”

The injuries Bjork endured limited him to only 50 appearances over his first two seasons. He set career highs across the board last year, scoring nine goals and 19 points in 50 games.

Bjork has compiled two goals and five points in 30 outings this season. The Bruins scratched him the last five games before the trade.

“(I) struggled to get back in at times,” Bjork said of finding a spot after recovering from his injuries. “(I) haven’t really established myself. … I’m looking forward to establishing that and building my game.

“Already, the people here, the players and coaches and all the staff, I’ve talked to a lot of people about doing that and working at that and they’re all about helping guys do that and so this is a great place for me.”

Bjork, who spent two years with the USNTDP before attending Notre Dame, said he remembers Granato well but did not have much contact with him.

“I remember that players loved him and really respected him and wanted to play well for him,” he said. “I got the same sense in the short time I’ve been here so far. I’m excited about that and I have a lot of respect for him. I know a lot of guys who played for him have reached out to me already and told me great things and told me they’re excited for me to build my relationship with him.”

Sabres captain Jack Eichel, who knows Bjork from their time as teammates at the USNTDP, reached out to his friend.

“Jack’s a great dude,” he said, “so it will be pretty cool to be playing with him.”

Adams accumulated an extra five picks for the 2021 draft and has 10 total after trading Hall, defenseman Brandon Montour, center Eric Staal and goalie Jonas Johansson in the last three weeks.

Adams said it was a strategy to acquire more selections this year.

“One takeaway that I had last year in a short time preparing for the draft was it is hard to go into the draft short-handed,” he said. “Draft picks are currency, and besides building your pipeline, which I think has been lacking, you can also use that currency in other ways. You can package picks together to potentially acquire players. You can package picks together to move up in the draft. Maybe we need some pick for expansion reasons to help yourself. …

“I certainly feel better when we look at our draft and see that now we have that type of currency I think will definitely help us.”

The @BuffaloSabres made some big moves leading up to Monday’s NHL trade deadline. In today’s #BehindTheBench, Buffalo Hockey Beat reporter @BillHoppeNHL spoke with WBFO’s @NicholasLippa about who is staying and who is going. https://t.co/bN3ifn1M38 pic.twitter.com/OidlASCT0v