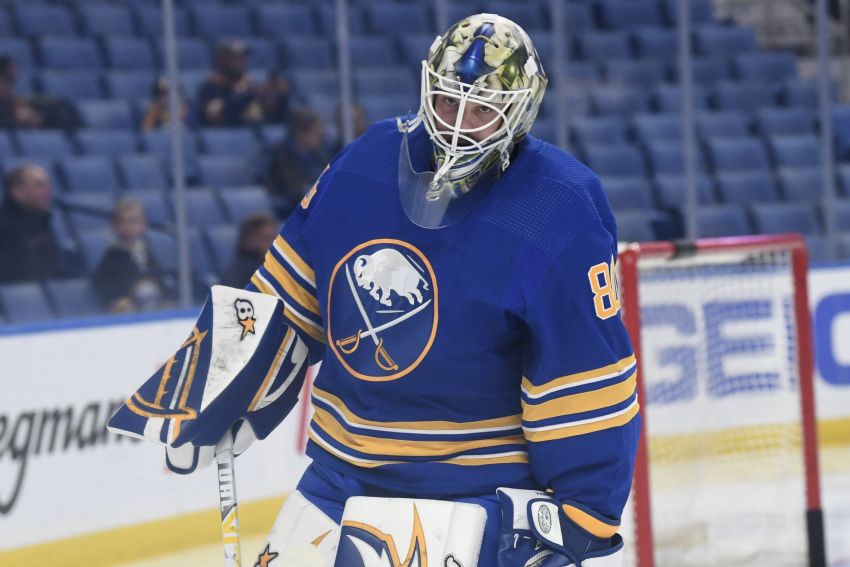 BUFFALO – Since the start of last season, Sabres goalie Aaron Dell has played just 13 games, including nine in the NHL. The veteran has often struggled in his limited action, failing to recapture what made him one of the league’s top backups a few years ago.

After a shaky preseason in which he quickly lost the No. 2 job, Dell allowed a fluky goal minutes into his NHL season debut last Saturday, losing sight of the puck.

But Dell, 32, settled down later in the Sabres’ 5-4 setback to the Toronto Maple Leafs, making some strong saves, including a point-blank stop on sniper Auston Matthews. Then during a relief appearance in Thursday’s 5-0 loss to the Calgary Flames, Dell made two early highlight-reel saves and stopped all 10 shots he faced.

“We helped him by leaving him wide open for some shots, if you detect my sarcasm in that,” Sabres coach Don Granato said following Saturday’s practice. “He was good, he was really good. It was a tough situation. There was pressure and his first few saves we didn’t defend for him.

“He kept it under control and it helped us significantly just calm a storm there. So I hope that ignites him a little bit.”

The Sabres sorely need Dell to find his game. While Dustin Tokarski has performed splendidly subbing for injured No. 1 goalie Craig Anderson, the Sabres’ schedule is unforgiving because of the Olympic break in February. Tokarski occasionally needs a night off.

Starting with tonight’s road game against the New York Rangers, the Sabres have a dizzying stretch of five games in seven days. They also play Monday, Wednesday, Friday and next Saturday.

Granato said Dell will play one of the next two contests. Given Tokarski’s dynamic performance late in Tuesday’s 2-1 road win over the Pittsburgh Penguins, it seems likely he will face the Rangers. Dell might start Monday’s game against the Columbus Blue Jackets at KeyBank Center.

Anderson is sidelined week to week with an upper-body injury, so the Sabres could keep turning to Dell. But if he falters, they have top goalie prospect Ukko-Pekka Luukkonen, 22, in Rochester. After a slow start, the 6-foot-4, 220-pound Finn recently found a groove, recording his first shutout with the Americans and earning AHL Player of the Week honors.

Dell, who played seven games with the New Jersey Devils last season, got to know Luukkonen during his stint as his backup in Rochester earlier this season.

“He’s a good kid,” said Dell, who was recalled Nov. 6. “He’s huge. He’s been doing really well lately. And I’m really happy for him. He’s been stepping in and he’s been making the most of the opportunity that he’s had so far.”

Dell’s three-game stint with the Amerks – he went 3-0, posting a 3.01 goals-against average and a .905 save percentage – was his most extensive AHL action since 2015-16, the year before he graduated to the San Jose Sharks.

The 6-foot, 213-pound Dell found himself in the minors again after compiling a ghastly 5.57 goals-against average and an .838 save percentage in two exhibition outings.

“That’s kind of how it goes sometimes,” Dell said of his preseason. “You get some tough bounces, sometimes things just don’t go your way. I haven’t played a lot of games in the past year. …

“I needed a little bit of game time to get that timing and stuff back.”

So Dell, who signed a one-year, two-way contract July 28, said he tried to use his starts with the Amerks to reacclimate himself to game speed and get his timing back.

Dell said the Amerks are a “really close” group.

“They just get along really well,” he said. “Everybody’s pretty tight knit. It’s kind of a family there.”