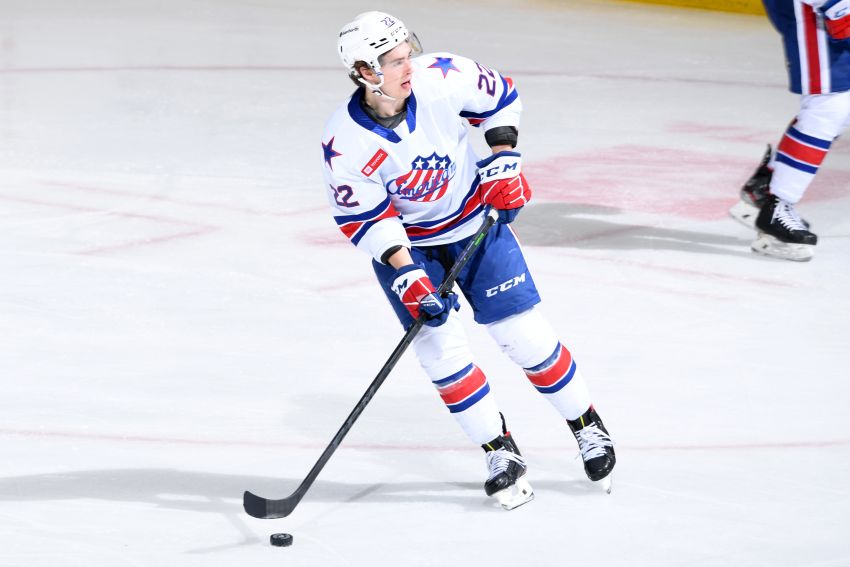 Jack Quinn has been on a tear in Rochester. ©2021, Micheline Veluvolu

ROCHESTER – Sabres prospect Jack Quinn could’ve waited another second or two to put the finishing touches on his shootout goal.

Quinn’s deft hands and feet put goalie Felix Sandstrom flat on his stomach, giving him the right side of the net and an inordinate amount of time to shoot the puck. So the Americans winger calmly completed his highlight-reel goal Friday.

“He’s sliding to the left and I know I’m going back to the right, so I know he can’t get back across,” Quinn told the Times Herald after the Americans’ 5-4 shootout win over the Lehigh Valley Phantoms. “So I can pretty much take as much time as I want to put it in. (I) just kind of slowed it down for good measure there.”

The rookie’s goal, which mirrored his slick shootout score in his AHL debut last season, “got a great reaction” on the bench, Amerks coach Seth Appert said.

“I mean, it’s a heck of a move, right?” Appert said. “They’ve seen him do some of those things in practice, so they’re not surprised but they’re certainly still entertained.”

The Amerks struggled so badly during the second period Appert switched up his lines, moving Quinn, who has played right wing all season, to center. Quinn, 20, played the position a bit for the Amerks last season and in Buffalo during rookie camp.

“It was a good opportunity to get a different look on the game and try to create some offense that way,” said Quinn, who pivoted Brett Murray and Michael Mersch late in the game.

Quinn, who had been playing with Peterka and center Peyton Krebs, assisted on Murray’s goal, his 17th point in only 13 games this season.

THIS IS JUST SILLY 😈 pic.twitter.com/ynFmFVJ2bt