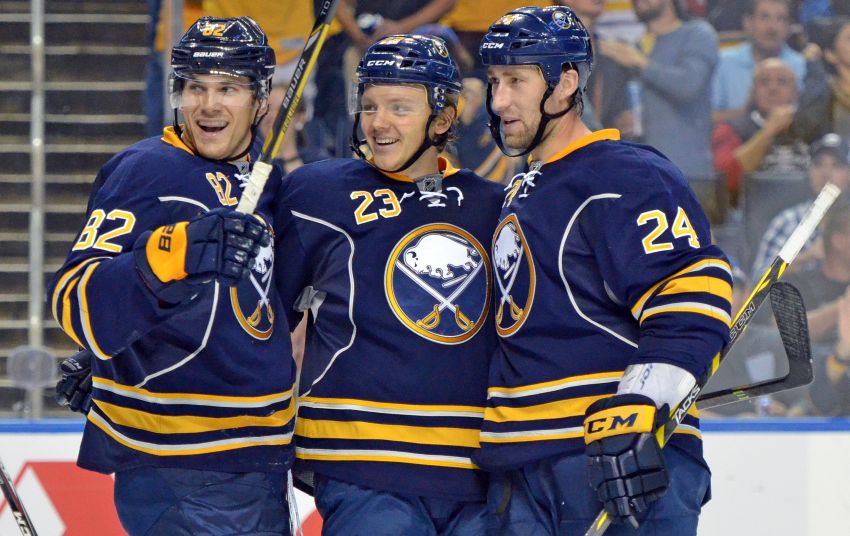 Reinhart, by his own admission, had been pressing this preseason. The savvy 18-year-old couldn’t score or even create opportunities, and it gnawed at him. The hockey IQ fans have heard about so much rarely materialized.

But as Wednesday’s contest dragged on, the center got open in the right circle, grabbed a perfect pass from linemate Chris Stewart and beat Washington goalie Philipp Grubauer.

“I’ve been waiting for that for quite some time,” Reinhart, the No. 2 pick in June, said after recording his first preseason point in his fourth game, a 6-1 Sabres win inside the First Niagara Center.

He added: “Not many come easier than that.”

Reinhart, who’s battling to earn a roster spot right out of junior, said the goal took “a monkey off my back.”

“It was really nice to see him smile,” Sabres coach Ted Nolan said.

Nolan has said Reinhart must score if he wants to stay in the NHL. He’s given the youngster plenty of opportunities, skating him regularly on strong scoring lines.

Reinhart played 15 minutes, 36 seconds Wednesday, mostly between Stewart and Marcus Foligno, two big wingers. The trio has been practicing together most of training camp but never played in a game.

“He found the spot, but he also had a pretty nice player finding him in that spot,” Nolan said. “It’s a combination of both. He’s always had the savvy and hockey smarts to get to where he needs to get to. He also had somebody to get the puck.”

Ennis signed a five-year, $23 million contract in July with the expectation he’d become the Sabres’ No. 1 center. So far, he has two goals and five points in three preseason games.

“Tyler’s one of those guys, the sky’s the limit for this kid,” Nolan said. “He’s extremely talented. Now, he taking that game to the next level. I’ve seen it lately.”

Ennis, who’s listed at 5-foot-9, wants to reward the faith the Sabres have shown in him.

“My whole life I’ve been proving people wrong,” he said. “I think it was nice to get the contract and be able to be stable and be in Buffalo, where I want to be. Tim (Murray) showed a lot of faith in me. Teddy showed faith in me. Maybe for once I’ll prove people right. I have that confidence in me. I’m going to work harder for guys who have that confidence in me. I’m going to earn every penny. We want to turn this franchise around.”

“We” is a strong word around the Sabres these days. Nolan said he’s “really starting to see the spirit of the team coming together.”

“They’re really starting to care for one another,” Nolan said. “Marcus, coming off a major surgery, he doesn’t want to get into those kind of things. You see Stewart jump in, which is great.”

Sabres goalie Jhonas Enroth made 22 saves. The Swede will likely be the opening-day starter, although Nolan wouldn’t confirm it.

“He’s made a strong statement, for sure,” Nolan said.

Notes: The Capitals left most of their best players, including superstar Alex Ovechkin, home. … Nolan said defenseman Mark Pysyk (upper body) has started skating on his own. Pysyk was injured in the preseason opener. … Nolan said goalie Michal Neuvirth will start Friday’s preseason finale in Carolina. … Foligno and Drew Stafford scored the other goals. … Brian Gionta played right wing beside Ennis and Moulson, a spot Stafford had occupied. Stafford skated with Mikhail Grigorenko and Cody Hodgson. … The Sabres announced a crowd of 18,228 fans for the home preseason finale.