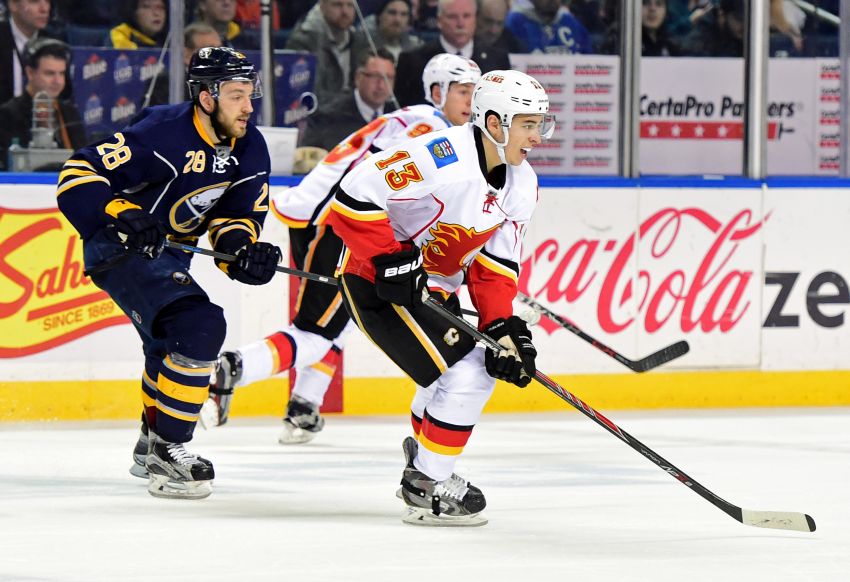 BUFFALO – Almost six years ago, Calgary Flames star Johnny Gaudreau met a shy European teenager who barely a year earlier had left his native Latvia to embark on a hockey career in the United States.

At first, as Sabres winger Zemgus Girgensons acclimated to life in the junior United States Hockey League, he was quiet around his Dubuque Fighting Saints teammates.

Within a month, Gaudreau said, his new friend had “changed completely.”

“He’s talking all over the place,” Gaudreau said Thursday prior to the Flames’ 6-3 loss to the Sabres inside the First Niagara Center. “He feels all comfortable. It took a little bit of time to get comfortable with each other, but after that month, just getting used to each other, getting to know each other, me and him were hanging out every single day.”

Both players sounded a bit nostalgic talking about their friendship and the Fighting Saints’ 2010-11 championship season, Gaudreau’s last before starting his dynamic NCAA career at Boston College.

“We kind of just took ahold of our friendship pretty good there,” Gaudreau said. “We were both younger guys and both learning, trying to make a name for ourselves. We became great friends off the ice and great linemates on the ice.”

Playing beside Gaudreau, Girgensons said, “kind of got me in a groove.”

“That’s kind of where everything started going uphill for me,” he said.

Even at 16, Girgensons, who centered Gaudreau all season, looked like he could reach hockey’s highest level. The Sabres drafted him 14th overall in 2012. Gaudreau, however, had plenty of doubters thanks to his diminutive stature. These days, the slick winger’s generously listed at 5-foot-9.

“Same style of player,” Girgensons said. “A lot of people doubted him. Even back then, going to junior and going to college, he’s always proven them wrong. He’s that type of player that can make plays no matter what. You think you can hit him, but you can’t.”

Gaudreau had 49 goals and 128 points in 143 NHL games entering Thursday, including 24 goals and 63 points in 62 contests this season.

“People always say with his size he might not make it,” Girgensons said.

After a brief run back at center filling in for the injured Ryan O’Reilly, Sabres rookie Sam Reinhart has been skating on the right wing beside center Jack Eichel and Evander Kane.

Someday, Sabres coach Dan Bylsma said, he envisions Reinhart returning to center, his natural position. But Reinhart, whose 18 scores lead the goal-deprived team, is most effective on the side right now, Bylsma believes.

“Just really putting together a line that could be our best line,” Bylsma said.

Of course, Eichel earned a spot on the U-23 team that also has Gaudreau and phenom Connor McDavid.

The unique World Cup format – there are basically All-Star teams in addition to countries – is good, Eichel said.

Bylsma said defenseman Cody Franson’s neck injury has “kind of … gone the wrong way for him.” He mentioned Franson has some other issues.