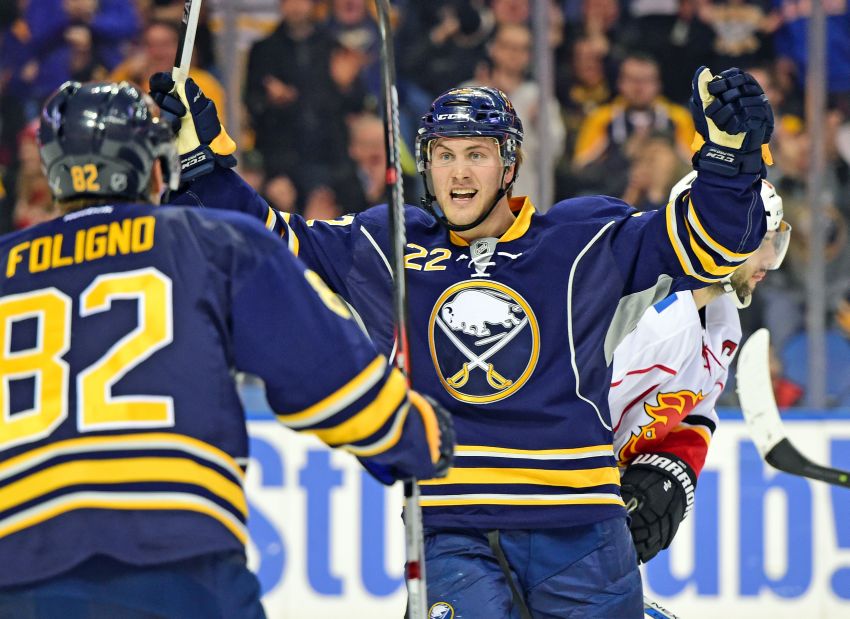 The Sabres’ offense has been anemic and top-heavy all season, getting one or two goals most games from the same group of players.

The secondary scoring they finally received Thursday from forwards Foligno, Deslauriers and Larsson and defenseman Rasmus Ristolainen, who opened the Sabres’ scoring after pinching in, his first goal in 22 games and ninth overall, was critical.

“When it has happened, we’ve won and it just shows that it has to be coming from everyone,” Foligno said. “If we can get this on a daily basis every night, we’re going to be very successful. It feels good just to see all four lines chipping in.”

The line of Foligno, Larsson and Brian Gionta, who created Ristolainen and Larsson’s goal, was perhaps the Sabres’ best.

“I told him to never do it again, toe-drag,” Sabres coach Dan Bylsma joked. “It was obviously a great move.”

Foligno said the move “was just something I thought of to do.”

“Penalty kill, you’ve got a one-on-one situation, just a little bit desperate hockey,” he said. “You can pull off those moves once in a while and tonight it worked.”

After the Flames tied it, Deslauriers’ fourth goal and first goal in 42 games dating back to Oct. 30 put the Sabres back up at 17:14

“It was big,” Deslauriers said. “I’m not there to score goals. When we have a chance like that and you put it in, it puts everybody back on their toes.”

The Flames, who lost their seventh straight game, got back on their toes 3:56 into the third period, getting the tying goal from Sean Monahan.

Then Larsson followed with his fourth goal – three are game-winners – at 9:31.

“You got a couple guys that don’t get on the scoresheet very often and they start to total,” Bylsma said. “We haven’t scored a lot recently.”

Eichel and Kane are now tied with rookie Sam Reinhart for the team lead with 18 goals.

Eichel’s goal – he beat Hiller, perhaps the NHL’s worst goalie, high from the point – was the Sabres’ first power-play score in five games and fourth in 11 contests.

“To have that one go in from the blue line and find the top corner, it’s certainly a sigh of relief for all of us – for Jack, for the power play,” Bylsma said.

Eichel also had seven of the Sabres’ 35 shots.

“I probably could’ve had a few more goals,” he said.

The Sabres will have a few more goals this season than in 2014-15. They already have 153, as many as last season and three more than two years ago.

They had seven goals in their last five games and had been shut out twice before Thursday.

“Some of the guys that did get goals were guys that had been a little bit snakebitten,” Bylsma said.

By the end of the Sabres’ second win in six games, some in the crowd of 18,651 fans inside the First Niagara Center started counting up the goals and demanding another.

“We should take a little more pride in is playing in front of these fans,” Eichel said. “They pack this barn every night and support us. It’s nice to put some goals on the board and get the environment going. We want to make this a tough place to come in.”