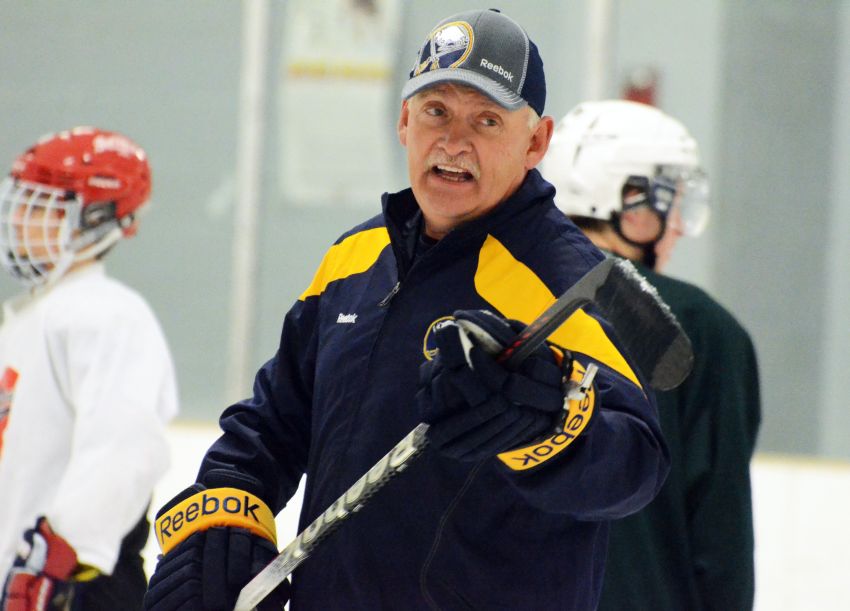 BUFFALO – Lindy Ruff had already endured 113 days of the NHL lockout, so waiting another 60 minutes to find out the work stoppage was over wouldn’t have bothered the Sabres coach.

“My phone had gone off while I was sleeping,” Ruff said Wednesday about how he heard the lockout had ended. “It was one of these, somebody had texted me at 6 a.m., ‘Congrats, it’s over.’ And (you think), ‘Wait an hour to text me.’”

The media room inside the First Niagara Center exploded with laughter.

“I was excited, in all seriousness,” said Ruff, who called Sabres fans the “greatest” before he started fielding questions.

In his first meeting with local reporters since July, Ruff couldn’t stop smiling during a 20-minute chat. Clearly, like just about everyone else associated with hockey, he can’t wait for the season to start.

“I kept saying we would be playing,” Ruff said. “I just thought it would be utter craziness if we didn’t, that we couldn’t come to some type of agreement, and I really believed that.”

Ruff spent much of the lockout monitoring prospects with the Rochester Americans and watching his son’s games. Now, he’s got a full plate again.

It’s still unclear when the Sabres’ brief training camp will be begin – it’s likely either Sunday or Monday – and the 48-game schedule won’t be released until after the NHL Players’ Association ratifies the new collective bargaining agreement this weekend.

Camp promises to be interesting. With almost a normal-sized roster participating and only about six or seven sessions available, Ruff expects practices will reach a regular-season pace after a few days.

“Our challenge is evaluating where the guys are that haven’t been playing,” Ruff said.

Since no exhibition games are planned, he would like to scrimmage against the Amerks one night. Nothing’s finalized yet, however.

Slick Russian center Mikhail Grigorenko, the 12th overall pick in June’s NHL Entry Draft, will be competing for an NHL roster spot. Naturally, Ruff’s excited to see if the 18-year-old can crack the lineup.

“I think everyone is intrigued,” Ruff said. “Obviously, he’s had an elite year in junior. He’s got … very good hands, he’s a very good playmaker. He had a real good tournament at the world juniors. Now you take that to a level where you’re going to play against even better competition, stronger bodies, guys that are heavier on the puck that compete at a stronger level.

With nine defensemen competing for six spots – T.J. Brennan’s coming up from Rochester, where he has 12 goals and 31 points – the Sabres will likely have to trade or waive at least one before the season starts.

Brennan, who must clear waivers to go back to the Amerks, has impressed Ruff.

“He has improved,” Ruff said. “He has got one of the best shots I’ve seen down in the American League. Obviously, we’ve been working with him on his defending. That area of his game has improved.”

“If he’s ahead of maybe some guys that haven’t been playing … we’re in the business of winning games, he’ll play,” Ruff said.

The compacted schedule, Ruff believes, won’t be much different from the Sabres’ normal slate during the winter.

“We always play a lot (in) January, February, March,” Ruff said. “It really is a normal schedule. You take the All-Star break out, put some games in there.”

Ruff said as an assistant coach with Florida during the lockout-shortened, 48-game 1994-95 campaign, “Every game meant so much.”

Despite missing the playoffs last season, the Sabres went on a two-month winter tear before collapsing again late. Most of the team and the core players are returning. Ruff knows the Sabres could be a special group this season.

“We’re just going to build off that late run we had last year,” he said.

Some other notes from Ruff’s chat:

– He’d like starting goalie Ryan Miller to play 36 to 38 games this season.

“You worry about both Tylers until we get them under our roof and look at them and make sure they’re OK,” Ruff said.

– Like general manager Darcy Regier on Tuesday, Ruff expressed an interest in free agent Jochen Hecht, who spent nine seasons with the Sabres. Hecht’s currently playing in his native Germany.

“When you’re talking about center, it’s an option we can talk about,” Ruff said.

Ruff acknowledged Hecht’s three concussions in a 10-month span, especially the “severe” one he suffered last January, worry him.