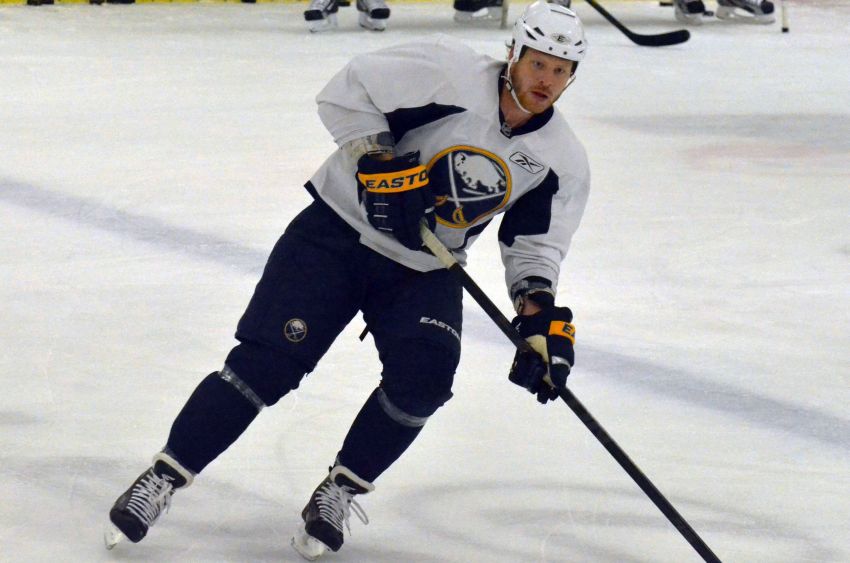 BUFFALO – All along, Steve Ott took the optimistic approach. Throughout the 113-day NHL lockout, the Sabres winger believed a season would eventually be played.

Still, when Ott heard Saturday’s marathon bargaining session between the NHL and the Players’ Association could result in the long-awaited agreement, he was “pretty cautious.”

“I didn’t want to get too overly excited because every time it seemed a deal would start gaining some ground the wheels would fall off,” Ott told the Times Herald by phone this afternoon.

But when Ott woke up this morning, Sabres defenseman Jordan Leopold, the team’s union representative, had sent an email stating a tentative collective bargaining agreement had been reached.

“I guess you can say it’s time to celebrate that hockey’s back,” Ott said.

You bet. Training camp should begin later this week and a schedule of about 48 or 50 games will start about a week later. The new CBA still has to be ratified in the coming days, although that appears to be a formality.

For Ott, the deal couldn’t come soon enough. The 30-year-old seemed ready to make his Sabres debut the second the team acquired him from Dallas on July 2.

He’s joining his best friend, defenseman Mike Weber. Ott’s mix of grit, skill and tenacity – something the Sabres sorely needed – could make him a popular player in a blue collar city.

“I’m really excited,” Ott said. “I haven’t earned my jersey yet, and that’s kind of a big thing for a hockey player to (go) through the trenches to be able to earn that jersey. I’m excited to put that jersey on and battle for it. It’s taken way too long to get that chance. But the opportunity is finally here.”

Ott refused to play overseas mostly because he “wanted to be 100 percent healthy and ready to go for the Buffalo Sabres.”

“I felt if I went, playing my style of game overseas or whatever, being physical, there was a chance I would be a little bruised up or a little body tired, I guess you could say, by January,” he said. “I wanted to be as fresh as possible, and I think I made the right decision to lay it all on the line for the Buffalo Sabres.”

Despite having his Sabres career pushed back more than three months, Ott believes getting the right CBA was critical for players.

Did they get it?

“Oh, completely,” he said. “You can look by the first offer they gave us that’s 43 percent (of revenue, down from 57 percent). I don’t think you could have a bigger slap in the face to start the process out than what was handed to us to get this process going. All in all, I’m kind of sick and tired of talking about the whole lockout thing. I’m excited to start talking about hockey.”

In an email to the Globe and Mail, Sabres goalie Ryan Miller wrote, “Players should feel good about their resolve. This was never a deal where we were going to do anything other than minimize what we gave back to the league. I think Don did a great job guiding us through what was a very tough situation – without threatening a full season – from our side.”

Miller also apologized to the many fans disenchanted by the NHL’s third lockout in 18 years and second in eight.

“Now that we have games on the schedule we just need some fans,” he wrote. “I know an apology doesn’t make it all better, but it’s a place to start. I’m sorry and I hope that fans will forgive us for the role we played in this lockout. We will show up ready to play if they want to come to the rink and watch.”

Meanwhile, if Ott wants to talk about hockey, there’s plenty on the plate now.

Ott, who’s planning on traveling from Windsor, Ont., to Buffalo today, expects the shortened season will be intense and wild.

“In the last years I’ve played in Dallas, the last 40 games for me have always been a playoff-type race,” he said. “ … Obviously, the schedule’s going to a lot more compressed, so you’ll be playing a lot more in the amount of days you normally have off. But, yes, that mentality of it being a sprint now to get into (the playoffs) becomes, I guess you could say, ramped up even more.”

What about that camp that will likely only be a week or so? Is that enough time for players to get themselves ready for a season?

“I think it’s way too long,” said Ott, who recently began ramping up his workouts with Weber. “I think if guys aren’t prepared and ready to go in the three-to-five day scenario, then shame on them. … I don’t think it’s going to be a problem at all. It’s more just getting the rust off the blades and being in game situations.”

Ott doesn’t even want to play an exhibition game that much.

“I’m too anxious to play right now,” he said. “I want to be competitive, and I want to make it count as soon as possible.”

Ott will get his wish soon.