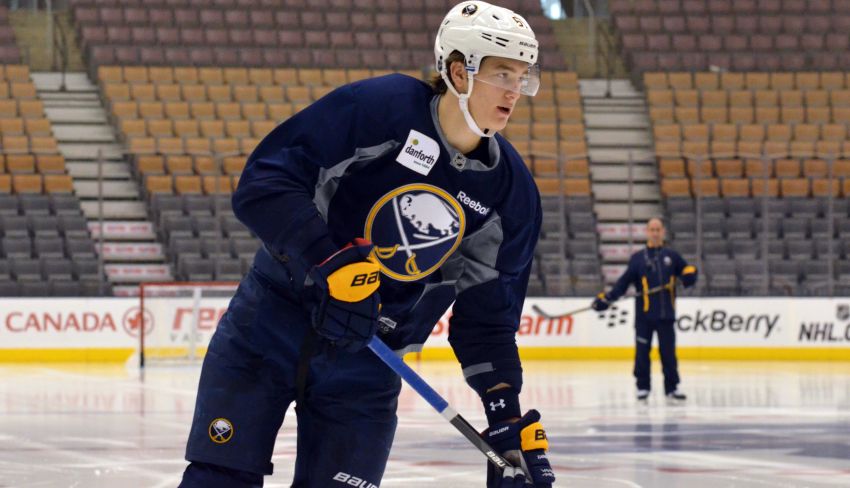 Two days later, Zadorov cut his finger during the Sabres’ preseason finale, shelving him for weeks. After he healed, the rebuilding team began playing him.

Now, the Sabres must decide whether to keep him or send him back to the Ontario Hockey League’s London Knights.

Zadorov, a healthy scratch the last two games and five of the past seven, has played seven times. He can play nine games before the first year of his contract kicks in.

The hard-hitting Russian certainly doesn’t lack any confidence. He said he’s not surprised the Sabres have kept him so long.

“I know who I am,” Zadorov said today following a long skate with spare players inside the Air Canada Centre. “I know how I can play. I think I’m ready to play in the NHL.”

Former coach Ron Rolston, who was fired Wednesday, seemed intent on keeping Zadorov, the No. 16 pick in June. But interim coach Ted Nolan has strongly hinted the Sabres can’t play all their youngsters.

“It’s a new coach, a new general manager,” Zadorov said. “I think I have to play a couple games, for sure. We’ll see what’s going on after nine games.”

Zadorov believes he’ll play more, although he said Nolan hasn’t told him anything. He’s likely out tonight against the Maple Leafs.

“I feel great in this room sitting here with these guys,” Zadorov said. “I’m sad I’m not playing. But I’m happy here.”

In other news, goalie Jhonas Enroth was one of five Sabres on this ice this morning. It’s unclear if the backup will make his seventh start this season.

It appears rookies Mikhail Grigorenko and Johan Larsson will be scratched again tonight.

Update: Here’s Nolan on why he has named defenseman Henrik Tallinder an assistant captain: “Watch him from afar, and you can tell he played in some great organizations, probably some of the best in this league. You don’t play on those type of teams and last that long without being a good character guy.

Another update: Enroth will start in goal.