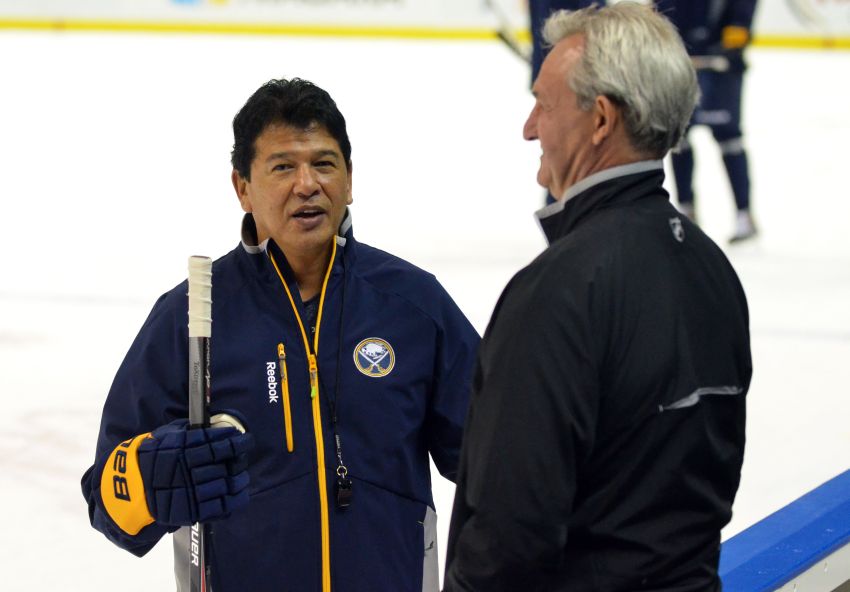 BUFFALO – Ted Nolan said he’s a straightforward type of guy. So after taking over as interim coach Wednesday, the 55-year-old requested one thing from the Sabres, whose work ethic has been lacking during their awful 4-15-1 start.

In a stunning move Wednesday, the Sabres fired longtime general manager Darcy Regier and rookie coach Ron Rolston. Pat LaFontaine is the new president of hockey operations. Nolan, a wildly popular figure here and a former Jack Adams Trophy winner as the NHL’s top coach, has the job for the rest of the season.

Sabres captain Steve Ott added: “Guys are going to have to be earning things around here.”

Nolan, most recently the Latvian national team’s coach, knew then he would be replacing Rolston.

Ott added: “Obviously, it’s not acceptable organizational-wise to have this (standing).”

“Hopefully, this is an opportunity for the Sabres organization to kind of reset a little bit,” he said. “Darcy has been here a long time, maybe time for a little bit different perspective and some other kind of influence coming in.”

Ott said players kept learning daily from Rolston, whose interim tag was shed in May after taking over for Lindy Ruff.

“We have some highly respected pieces at the top level all the way down,” Ott said. “It’s probably not an easy job for Mr. (Terry) Pegula to do.”

He already spoke to some players on the ice Wednesday.

“It’s unfair for a 19-year-old to go against 27-year-olds on a daily basis,” Nolan said. “You can do it for a little while. But on a consistent basis there’s not too many Sidney Crosbys.”

He also said winger Patrick Kaleta, banished to the minors recently to develop a calmer style, could be brought back.

Rolston’s assistant coaches are staying on.