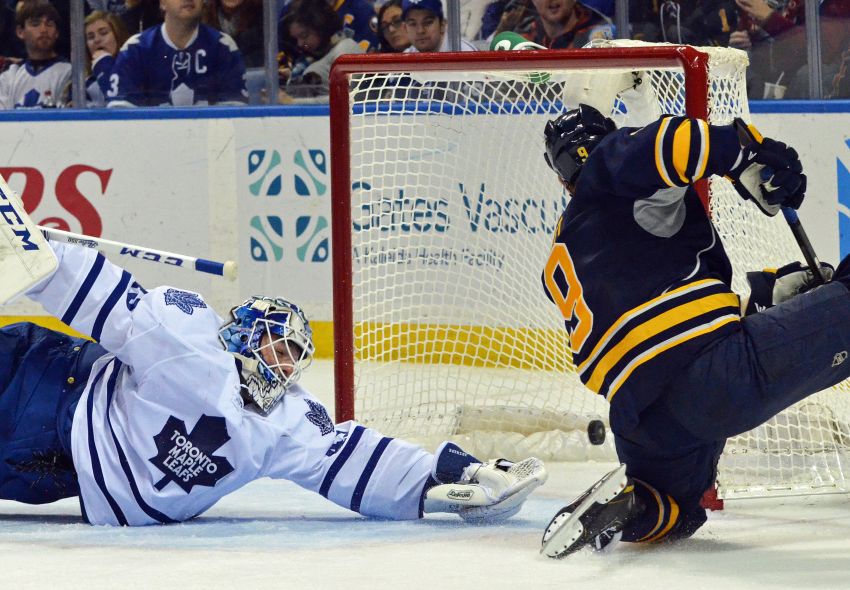 BUFFALO – It might as well have been opening night again inside the First Niagara Center. Twenty-one games into the season, the Sabres started over Friday, performing like a new, refreshed team in their first game under interim coach Ted Nolan, an exciting 3-1 triumph against the hated Toronto Maple Leafs.

Nolan told the Sabres he was wiping the slate clean and didn’t care about their awful start under Ron Rolston, who was fired Wednesday in a major shakeup.

They responded with arguably their best effort this trying campaign.

“That made a lot of guys realize that game one is basically tonight and you throw those other 20 away,” said captain Steve Ott, who had a goal and two points in only the Sabres’ fifth win. “Honestly, it felt like a completely different room in there.”

The Sabres often looked like a different club, dictating the pace early and taking a lead into the third period for only the third time this season.

“Tonight we played like the Buffalo Sabres,” said winger Marcus Foligno, who scored the go-ahead goal 15:22 into the second period.

Sabres defenseman Christian Ehrhoff added: “Some guys have been down and missing some confidence. For them, it’s a new start. We had everybody going tonight.”

This one wasn’t decided until late.

“Nice finally to make a save for Millsie,” Ehrhoff said. “He’s got so many saves for us. That’s just a lot of desperation at the end.”

“Christian Ehrhoff had the play of the game and saved our butts and then he put it away,” Sabres goalie Ryan Miller said.

Ehrhoff added: “It was just a great finish to a fun game tonight. I think the fans enjoyed it. We came out good today. We competed for 60 minutes.”

Nolan noticed that excitement from the bipartisan crowd.

“It was really fun for me to look up once in a while and see how much fans enjoyed this game,” he said.

Many of those fans gave Nolan a warm ovation as he stepped onto the Sabres’ bench for the first time since May 11, 1997. The special moment left the 55-year-old emotional.

“I really had to hold them in tight,” Nolan said. “It was one of those games where you didn’t know where this type of day would ever happen again. It was really very emotional. I’ll have a good cry after everybody leaves.”

What does it feel like going more than 16 years between wins?

The Sabres honored Nolan and Pat LaFontaine, the new president of hockey operations, with video tributes. As the crowd roared for the legendary LaFontaine on the video boards, owner Terry Pegula gave him a playful tap on the head.

Clearly, everyone associated with the Sabres enjoyed Friday’s win.

“It was a lot of fun,” Sabres defenseman Tyler Myers said. “I’ve said it a few times, but it’s important we don’t let this be a game where we only do it because there were changes made. But I love the way we came out tonight. I loved our compete level. In the last day and a half, that’s what Ted has stressed the most since he came in, just to see a compete level.

“He knows mistakes are going to be made. He just wants us to go play and play hard.”

The first meeting between the longtime rivals since the wild Sept. 22 preseason brawl didn’t produce any fireworks.

The Sabres face the Leafs again tonight in Toronto.