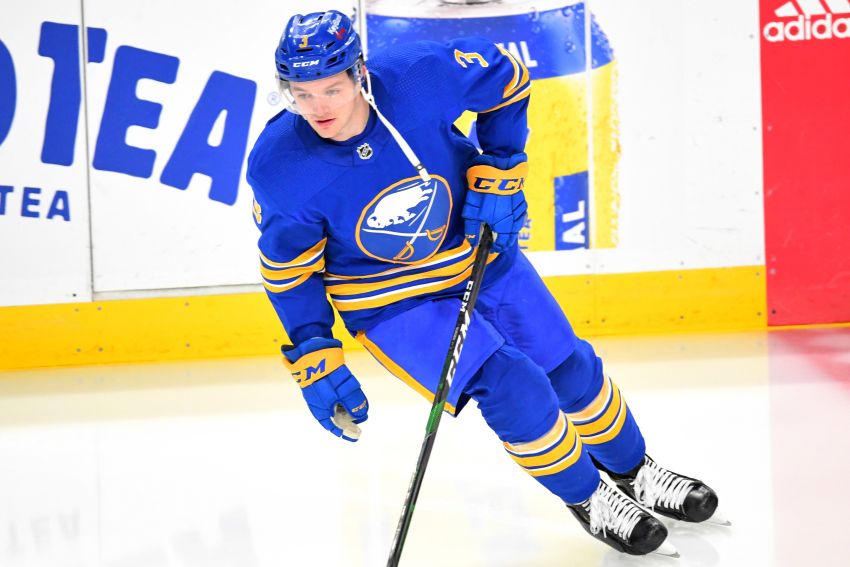 BUFFALO – When Sabres defenseman Will Borgen blocked a shot with his right forearm Feb. 20 in New Jersey, he had no idea it had been fractured.

“They just kind of stitched it up because it was bleeding a little bit,” Borgen said on a Zoom call prior to Tuesday’s 2-0 loss to the Boston Bruins. “I didn’t have an excuse to not play at the time.”

“(I) had a little bit of adrenaline, so I didn’t feel all the pain,” he said. “I definitely wasn’t feeling too strong out there. I wasn’t feeling great.”

At first, the Sabres said Borgen, who was starting to earn regular duty, would miss one game. Then further evaluation revealed the fracture.

The 6-foot-3, 205-pound Borgen underwent surgery and has missed the last 32 games. He skated with his teammates for the first time Tuesday inside KeyBank Center. He did not, however, play.

“It (stinks) because I was just getting in the lineup and playing,” Borgen said of his injury. “It was fun. The last two months or whatever, I’ve never been injured during the season before, but it’s just a lot of training again.”

After spending two seasons with the Rochester Americans, Borgen, a fourth-round pick in 2015, 92nd overall, began this year on the taxi squad before playing four straight games.

“He’s another player that’s on the cusp of full-time NHL potential,” interim Sabres coach Don Granato said. “To get to that point, there’s a lot of little intricacies that he’s gotten right and I’m excited because of that.”

Granato said Borgen senses he’s on the verge of breaking into the big leagues.

Borgen, who played his first four NHL games in 2018-19, said staying with the Sabres all season has helped him feel more comfortable.

“Just confidence playing out there,” he said. “You grow relationships with the other guys and you feel more confident out there.”

Luukkonen could make his NHL debut Thursday against the Bruins.

“We won’t make a decision on Thursday until tomorrow,” Granato said Tuesday morning. “But he’s in consideration for Thursday, absolutely.”

Winger Drake Caggiula, who was claimed off waivers April 9, made his Sabres debut Tuesday, skating at right wing beside center Riley Sheahan and Tobias Rieder.

Caggiula, 26, spent a week in quarantine after flying commercial to Buffalo and started skating again Sunday.

The newcomer, who played his last game with the Arizona Coyotes on April 5, planned to go full tilt.

“There’s nothing to save it for,” Caggiula said Tuesday morning. “There’s not too many games left in the season and whatever situation I get put in, I’m ready to answer the bell and I’m looking forward to getting back out and playing. I did whatever I could to maintain the best conditioning that I could under the circumstances, got a couple skates under my belt now.”

He played a season-low 5 minutes, 55 seconds in Sunday’s 4-2 win over the Pittsburgh Penguins. He played only three shifts after taking a hooking penalty 2:59 into the second period.

“Cody clearly he wasn’t on his game,” Granato said. “And mistakes happen. We’re at a point now where we can put Caggiula in and there needs to be a guy out and I thought the other night, other guys were going and to a level that I went with those guys. They were going, they were in sync, they were in the moment.”