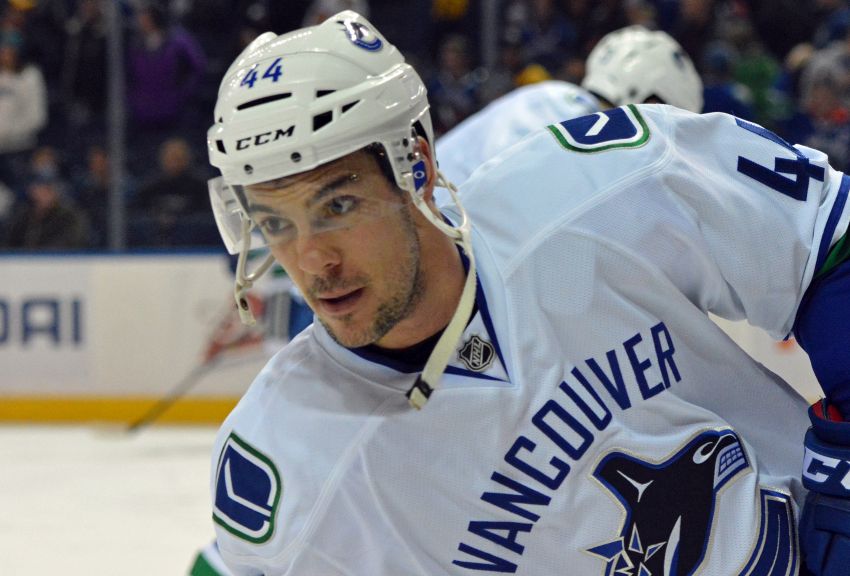 BUFFALO – Adam Clendening’s first experience playing here about 12 years ago is still vivid. The Wheatfield native remembers gazing around and soaking up the atmosphere during a Buffalo Regals youth hockey game hours before the Sabres hit the ice.

“That was definitely pretty surreal,” Clendening said Thursday prior to the Vancouver Canucks’ 6-3 loss to the Sabres, his first NHL game at the First Niagara Center.

Clendening used to be the little kid on the glass watching his favorite players up close.

“It’s a little weird now that I’m on the ice,” the rookie defenseman said.

Thursday was special for Clendening, the 36th pick in 2011. About 15 family members and friends watched his 17th NHL game, including his father, Frank, and mother, Ann.

“Just to play a game anywhere in this league, and then to come in the rink you grew up watching your home team play in, it’s definitely something surreal,” Clendening said.

Clendening, an AHL star, should stay in the NHL the rest of the season. The Canucks began Thursday 8-4 with him in the lineup.

The entire season has been memorable for the 22-year-old. He scored in his NHL debut with Chicago on Nov. 20 in Calgary. Snow prevented his parents from making it there, but they watched his second appearance two nights later in Edmonton.

Seeing his them wearing the “biggest smiles” following the game was an emotional experience.

“I think they kind of realized all the work they put into it and finally getting to watch me play,” Clendening said. “I was the same way.”

Shortly after Chicago traded him to Vancouver on Jan. 29, the Canucks had their annual father’s trip.

“He loved every second of it,” Clendening said. “He was like a little kid in a candy store. He had a blast. That kind of solidified how much work we put in, especially my parents. They drove me to the rink, let me leave home at 14.”

Clendening grew up, of all things, a Boston fan. Having a father who liked the Bruins swayed him into rooting for one of his hometown team’s fiercest rivals.

Now, Clendening’s on Vancouver, which has developed a strong hatred for the Bruins since losing the 2011 Stanley Cup final.

“Going to the Canucks with that whole Stanley Cup finals thing, I got to be a piece of that,” he said.

The trade was a bit surprising because of its timing, Clendening said.

“If they were looking to do something around this time of year, it would’ve been a little bit more expected,” he said.

Still, changing teams has “been a blessing, for sure. I love it here,” he said.

“It’s bad but not as bad as we thought,” Nolan said.

The Sabres also played without winger Tyler Ennis, who will likely miss one game, Nolan said.

With two-thirds of the Sabres’ top line injured, they recalled winger Zac Dalpe and center Phil Varone from Rochester prior to the game.

Dalpe, who played one NHL game earlier this season, has been the Americans’ hottest offensive threat, scoring 11 goals in the last 19 games. The 25-year-old has a team-high 16 goals and 28 points in 44 AHL games.

“I’m kind of getting back to my old self,” said Dalpe, who spent all of last season with Vancouver. “You get thrown in a role, it kind of gets away from you a little bit. Now I’m shooting the puck and feeling well.”

Meanwhile, defenseman Mike Weber, originally thought to be out two weeks, returned from an upper-body injury that sidelined him two games. He underwent surgery just days ago.

Nolan said goalie coach Arturs Irbe spoke to goalie Michal Neuvirth about the $2,000 fine the NHL levied on him Wednesday for diving/embellishment.

“Goalies dive, too,” Nolan said. “That’s one thing we addressed in the league. The one thing we don’t want to see is there’s enough embellishment going on. You do it, you’ll get caught.”