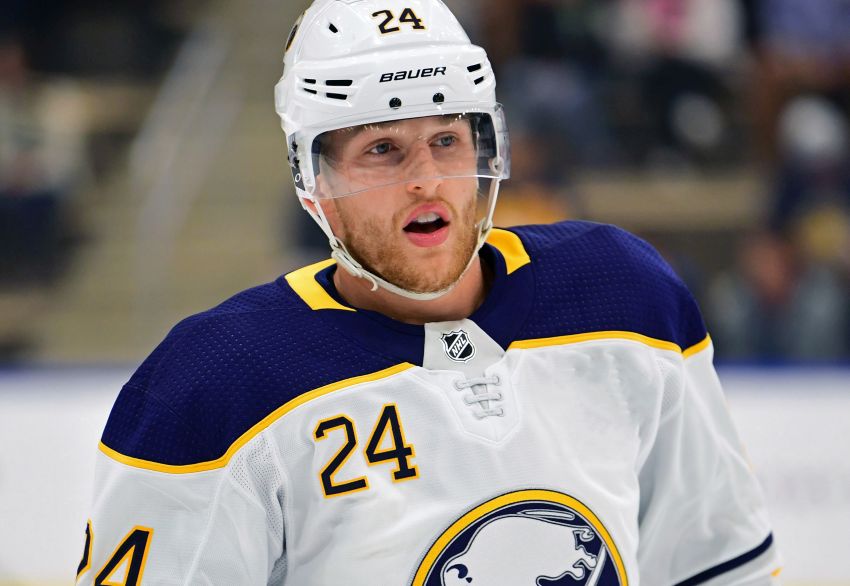 PITTSBURGH – Instead of battling for an NHL roster spot during training camp, Sabres prospect Hudson Fasching started slowly before Buffalo demoted him early.

As a rookie last season, Fasching’s strong camp forced the Sabres to keep him. This year, however, the winger never really contended for a spot.

“It wasn’t the camp that I wanted,” Fasching said Saturday prior to his NHL season debut, a 5-1 loss to the Penguins inside PPG Paints Arena. “I didn’t come out with the speed and the intensity that I wanted, so I think that’s something that’s kind of developed in Rochester.”

Clearly, Fasching took his demotion as a challenge and started utilizing his 6-foot-3, 204-pound frame to his advantage.

They desperately need big bodies to fight for dirty goals around the net.

“Hudson’s a type of player that can go down there (to the net),” Sabres coach Phil Housley said. “He’s big, he’s strong.”

“He’s brought a physical element, he wants to play with an edge,” he said. “I think that’s what makes him effective, that’s being tough to play against.”

Fasching has six goals and nine points in 21 games with the Amerks, who began Saturday 11-5-3-2. He has one goal and three points in 17 career NHL contests.

A groin injury that cost Fasching two months last season and dogged him following his return ruined what started off as a promising rookie campaign.

“Guys are happy, we’re excited to be there every day,” Fasching said. “There’s a lot of energy at the rink every day. … It’s fun to be there.”

“(Taylor’s) not trying to overcoach us, in my mind,” he said. “I think that’s helping a lot, letting guys play … play the way they’re supposed to play.”

“Focus on me and focus on building my own game,” he said. “Even after training camp, that was kind of my mindset.”

Fasching skated at right wing on the fourth line beside center Johan Larsson and Zemgus Girgensons. Fasching, who promised to go to the net, took an early goalie interference penalty. He also parked himself in front of Penguins netminder Tristan Jarry on the power play.

To make room for Fasching, the Sabres scratched winger Matt Moulson, who has zero points and a minus-9 rating in 14 games.

The Sabres made one change on defense following Friday’s 4-0 home loss to Pittsburgh, inserting Josh Gorges for rookie Victor Antipin, whose first-period gaffe Friday led to a penalty-shot goal.

Taylor, an assistant with the Penguins’ AHL affiliate last season, has his fingerprints on Pittsburgh’s last Stanley Cup.

Their short stints with Taylor, a former AHL star, were rewarding.

“He taught players what it’s going to take to get to the next level,” Rowney said. “He was always working extra time on little skills for every player. He was a great coach to have. I only had him for a brief moment there, but I enjoyed my time there.”

He added: “When you see a guy like that who’s been through it all, I think it means a lot.”

The Penguins honored Sabres general manager Jason Botterill, who won three Stanley Cups in their front office, with a short video tribute during a stoppage in play.

The Sabres hired Botterill in May.