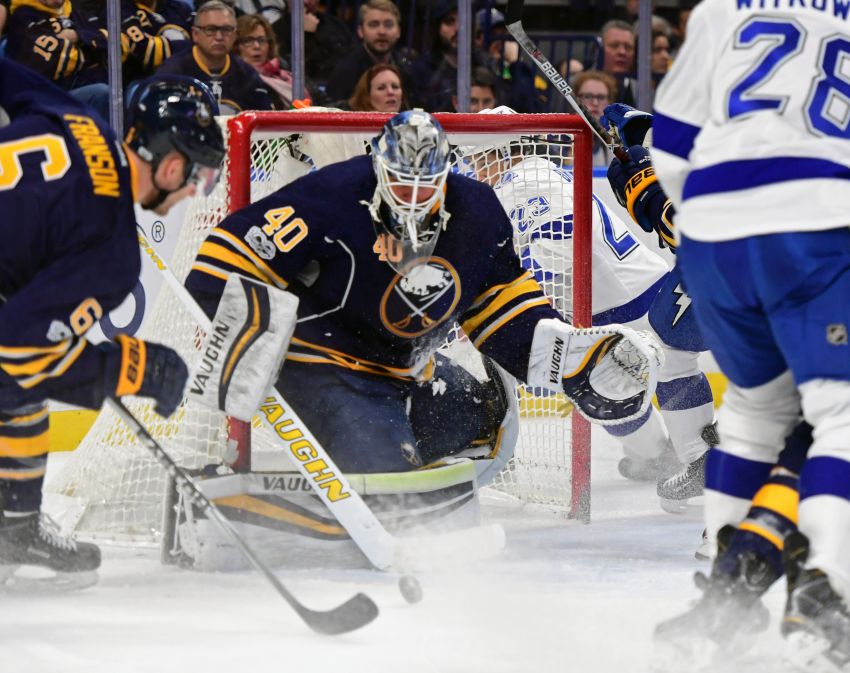 BUFFALO – To Sabres goalie Robin Lehner, shootouts are “different.” Players have all the time they need, allowing them to speed up, slow down and try things that wouldn’t be allowed in regular play.

It might not be regular hockey, but it still counts, and Lehner has been brutal in shootouts all season, allowing all eight opponents to score on him.

“They got to do something (in regular play), (shootouts) they don’t,” Lehner said. “Maybe I have problems adjusting to the speed changes.”

The Russian zoomed in down the right wing, took his puck off the stick like he was going to cut to the net and simply let the puck slide through Lehner’s legs.

“He did it on purpose. What can I say?” Lehner said. “Bad by me, pretty sick by him. It’s not a secret I’m not the best at shootouts. I’m working on it.”

“There’s not a lot of ways to look at it,” he said. “Tonight he was outstanding in the game. … He got us the point in the game. He’s (been) a bit of riddle, mystery about him in a shootout.”

Lehner’s teammates, incredibly, haven’t scored a goal for him, so they haven’t helped.

The Sabres, 1-6 in shootouts this season, hadn’t played one since Dec. 20. They had played seven straight overtime games, going 4-3.

“Yeah, I thought maybe we’d put enough distance between our last shootout maybe we could start fresh on this one,” Bylsma said. “It seemed to come fresh back.”

Tyler Johnson tied it 2:47 into the second period, beating Lehner from in close.

After that, well, very little happened.

Sabres defenseman Dmitry Kulikov left the game with an upper-body injury following a first-period collision behind the net.

Kulikov has endured a miserable campaign, missing action because of a lower-back bruise he suffered in his preseason debut. Clearly, the Russian has never felt 100 percent this season.

Bylsma didn’t have an update on his status. If he can’t play, the Sabres will likely dress defenseman Justin Falk, a healthy scratch the last seven games, for this afternoon’s road game against the Pittsburgh Penguins.

Lehner made 31 saves, including a brilliant stop on Jonathan Drouin’s one-timer early in the third period. Lehner stymied Vladislav Namestnikov point-blank with his right pad later in the period as he looked for the puck.

The Sabres missed a chance to jumped ahead of Tampa Bay, which they trailed by one point in the Atlantic Division.