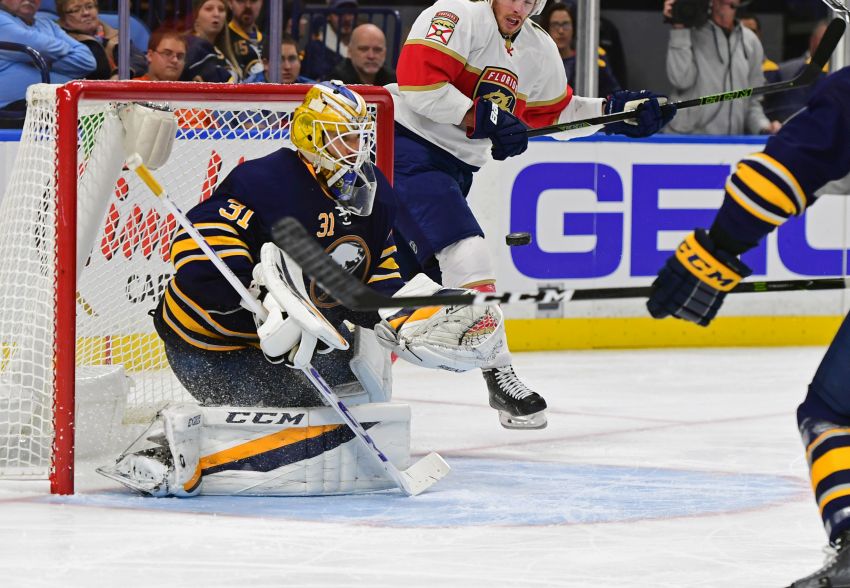 BUFFALO – Early in the Sabres’ 3-0 victory Saturday afternoon, as Dan Bylsma watched Anders Nilsson gobble up puck after puck, the coach had an ill-timed thought about his goalie’s strong performance against the Florida Panthers.

“I don’t like it when I have thoughts like this,” Bylsma said after the Sabres’ first home win ended their four-game losing streak. “He just looked so solid, so confident in net you thought it was going to be hard to get one by him.”

“When you see your goalie make three, four, five saves that are just hitting him right in the chest, he’s swallowing them up, you know he’s playing big and strong and square in the net,” Bylsma said.

Still, Nilsson’s second shutout in his 55th NHL appearance was in doubt until the end before the 18,261 fans inside KeyBank Center.

The Sabres killed a late penalty before Dmitry Kulikov hooked Florida’s Vincent Trocheck on a breakaway with 57 seconds left, meaning Nilsson had to face a penalty shot.

“Just tried to stay as patient as possible and wait him out,” Nilsson said. “I think I got a little lucky, too, because he missed the net.”

Had Bylsma ever seen a shutout secured by stopping a penalty shot?

Nilsson will receive most of the attention for the Sabres’ second win in seven tries. But fresh off Thursday’s 4-0 home loss to Minnesota, a game they often dominated during the final 40 minutes, they put together a strong team effort from top to bottom.

“That’s the way we have to play,” Sabres forward Sam Reinhart said. “Right from the start with that mentality. That’s been that struggle this year. To finally come out with a big push in the first and continue that with all four lines was important for us.”

Johan Larsson scored 7:47 into the game, giving the Sabres a rare early lead. Remember, they had scored just one goal in two home games entering Saturday.

“That was my first thought when Larsson scored, I was talking about getting a goal here at home for the team and for the fans,” Bylsma said. “The game had a lot of good in it where we needed to be good.”

After Reinhart’s power-play goal made it 3-0 8:48 into the third period, the Sabres, who blew a late 3-0 lead and lost Tuesday in Philadelphia, closed out the game.

“I think we learned from the other night,” said Sabres winger Kyle Okposo, who scored a power-play goal. “We just played smart and kind of boring but hard at the same time. We just were patient, waited for the chances.”

Nilsson, who played with Edmonton and St. Louis last season, has patiently waited for an opportunity. The Swede finally earned his first start Tuesday after starter Robin Lehner caught a stomach bug.

“Just working the same way I have been every day, controlling what I can control,” Nilsson said. “I’ve been trying to prepare myself as good as possible for every chance I can play a game.”

Nilsson’s only previous shutout came March 4, 2012, a 24-save effort in the New York Islanders’ 1-0 win against New Jersey. Ironically, Okposo scored that game’s only goal.

When reminded about the game, Okposo couldn’t remember it.

“They told me it was against New Jersey,” Okposo said. “I don’t really remember … how I scored, so I can’t say I do.”

Nilsson has gaudy numbers so far, a 1.96 goals-against average and a .937 save percentage. He made 38 saves Tuesday. Naturally, he has impressed his teammates.

“When I was on the Island, I think he had some things mechanically that he was working out, and now it seems like he’s corrected a lot of those,” Okposo said. “He’s really solid. You saw today he was just eating pucks up. He was really square.”

Reinhart said: “The way Philly went, that one was on us, we kind of took that away from him. To see him bounce back and have that performance tonight was huge and only helps our confidence as well.”