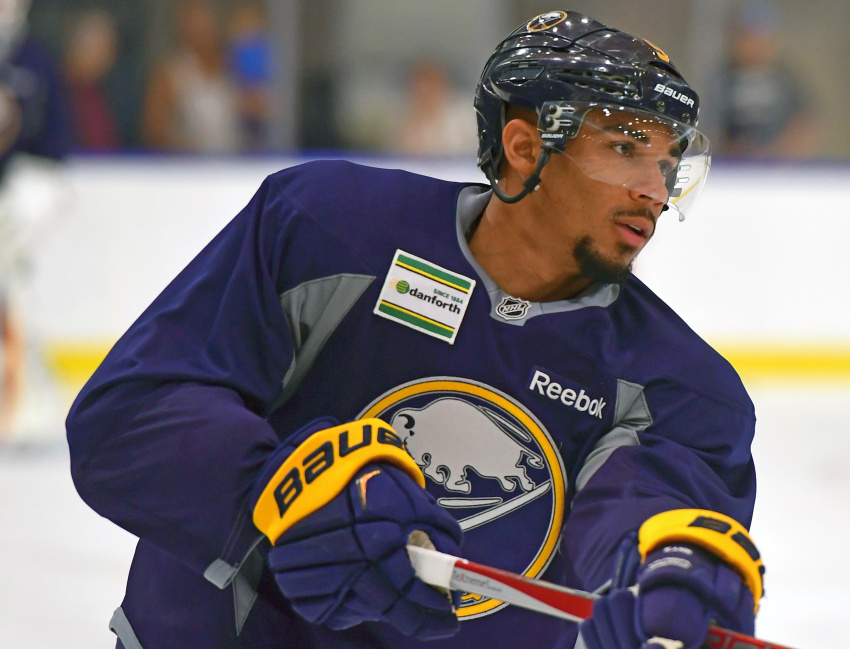 BUFFALO – For the next little bit, Evander Kane will likely have to endure some pain on the ice. The Sabres winger, out since breaking four ribs Oct. 13, hasn’t quite healed 100 percent.

“I don’t think anything is really healed kind of right when I get back, but it’s healed enough to where I can play and come back,” said Kane, who will return tonight against the Ottawa Senators. “I’m sure there’ll be a little bit of pain throughout the course of the next couple weeks.”

Kane skated this morning inside KeyBank Center on the left wing beside Kyle Okposo and Hudson Fasching, who subbed for top center Ryan O’Reilly, a game-time decision.

Update: O’Reilly is out. The Sabres have recalled winger Cole Schneider, the AHL’s leading scorer with 15 points, from the Rochester Americans. Winger Hudson Fasching has been sent down. Schneider, 26, a Williamsville native, played his first two NHL games late last season.

The Sabres could recall someone if O’Reilly can’t play, Bylsma said.

Kane has been working out rigorously with assistant coach Dennis Miller. The former 30-goal scorer felt so good last week he told Bylsma he would be ready for tonight. This morning was his first team skate.

Kane said he will wear a flak jacket.

In other injury news, winger Tyler Ennis is out tonight with what Bylsma called a “mid-body injury.” Bylsma said Ennis is still being evaluated.

Meanwhile, Fasching, out the last four games with a groin injury, is “right on the cusp of being ready to go,” Bylsma said.

In other good injury news for the Sabres, center Jack Eichel, out since sustaining a high left ankle sprain Oct. 12, four weeks ago, is seeing a doctor today, Bylsma said. If it goes well, there’s the “possibility of progressing in workouts,” Bylsma said.

In game news, goalie Robin Lehner will make his sixth straight start tonight, a new high with the Sabres. The Swede dazzled in Saturday’s 2-1 win in Ottawa, stopping 32 shots. He started five straight games last season from Feb. 14 to 24.

– O’Reilly, who didn’t play the final 2:25 in Boston, is second among NHL forwards with 22 minutes, 16 seconds of ice time a game. He is also second in the league with 180 faceoffs won. His 61 percentage win percentage ranks ninth among players who have taken at least 100 faceoffs.

– Sabres winger Matt Moulson, who has a seven-game goal drought, is tied for the league lead with four power-play goals.