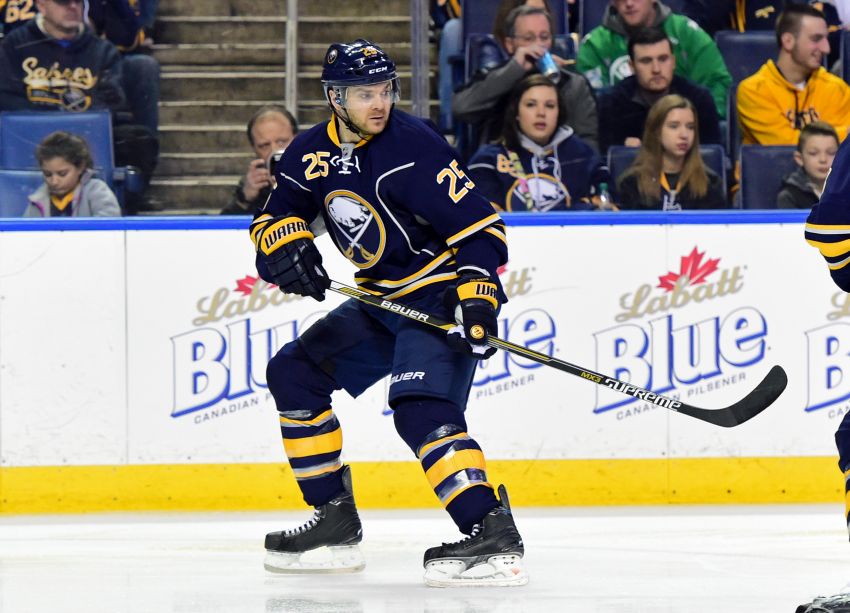 BUFFALO – For 10 weeks, as Carlo Colaiacovo sat game after game – 30 out of 32, including a whopping 15 straight – the Sabres defenseman kept giving coach Dan Bylsma a message.

“Every game he was, ‘I’m ready to go,’” Bylsma said prior to Saturday afternoon’s 3-2 overtime win against the Carolina Hurricanes inside the First Niagara Center.

These days, even with Colaiacovo, 33, dressing regularly again – he played his 10th straight game Saturday – the affable veteran keeps chatting up Bylsma.

“Very good,” Colaiacovo said about playing again. “I think very good’s an understatement. It’s been a great feeling to be in there every night. That’s why you play the game, to be an everyday guy.”

It was assumed Colaiacovo would play somewhat regularly when he signed a one-year deal in July to provide depth. But the emergence of rookie Jake McCabe and a surprising lack of injuries – the Sabres have used only eight defensemen all season – have limited the former first-round pick to 31 appearances.

Colaiacovo never changed over a rough 73-day stretch in which he played only 22 minutes, Bylsma said.

“He just has that confident, calm demeanor to him in how he plays the game, bringing that to our back end.”

Colaiacovo has recently been partnered beside youngster Mark Pysyk, a role he said he “relishes.” He started the season with Rasmus Ristolainen.

“That’s what this league is turning into, young players and teams leaning on young players,” he said. “So if I can help a young player get his game back and feel more comfortable about himself, by all means I’m up for the challenge. I embrace it. I love it. I love seeing a young guy get better throughout the year and makes me feel better about my game, too.”

A relieved-looking Evander Kane said Saturday morning he’s happy he won’t be charged after a 74-day investigation into a sexual encounter he had Dec. 27 at a downtown hotel.

Bylsma’s glad everything’s behind the Kane.

“I know it’s been over Evander’s head for a while now,” he said.

After a busy stretch of seven games in 11 days, the Sabres don’t play again until Wednesday, when they host Montreal. They have today off.

“I’m not sure that we’re going to be comfortable with the next three or four days where we have a day off and two days of practice,” Bylsma said. “We’ve played a lot of hockey, and we’ve played back-to-backs with travel mixed in there.”