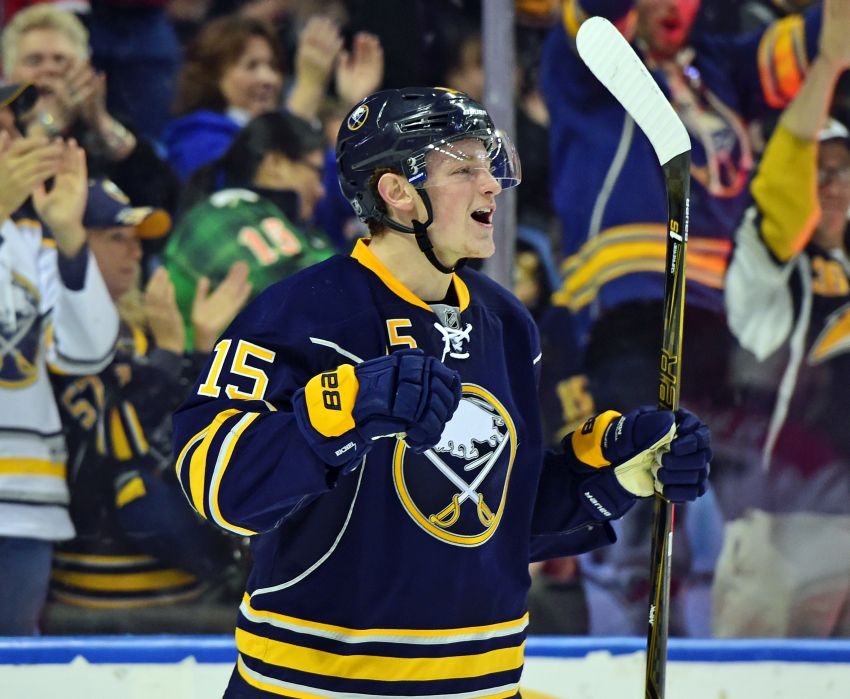 “They’re helpful when you get caught on a line change,” Kane said following the Sabres’ thrilling 3-2 win against the Carolina Hurricanes. “It’s kind of like a punt, four seconds of hang time in the air and you can kind of get off the ice.”

But with eight seconds left and open ice ahead, Eichel wasn’t trying to get off.

“I noticed that there was nobody, so I just took off,” he said following his first career overtime winner.

Kane heard a yell – “I figured it was Eichs,” he said – and lofted the puck from his own left circle high through the neutral zone into Carolina territory.

“I thought I’d just lay it out there for him to try to catch it,” Kane said. “I don’t think too many guys are going to catch him going up the ice for a breakaway.”

Still, Bylsma said it appeared Eichel couldn’t see the puck. The bench tried to direct the center and pointed and yelled to him he had time, so he tried to stay patient.

Eichel also took a quick peak at the end zone clock and saw he had about four seconds when he grabbed the puck near the right circle with what remained of the capacity crowd of 19,070 fans inside the First Niagara Center buzzing.

“He chased that puck down and gave us a thrill,” Bylsma said.

Eichel then zoomed toward Cam Ward and, almost nonchalantly, backhanded the puck between the goalies legs for his team-leading 22nd goal and second of the game.

“I liked using that five-hole move being there,” Eichel said. “I just pulled it to the backhand and saw it open up.”

Eichel said “you look like an idiot” if you don’t score with that move.

“It’s nice that it was able to sneak through,” he said.

It went through, of course, thanks to Kane’s heads-up pass. Eichel credited his linemate for putting the puck into space where he could skate into it. Bylsma said the pass was so high it could’ve hit the scoreboard.

“A lot of people try to make a direct pass,” Eichel said. “You don’t know what could happen to it.”

After a boring opening 40 minutes – “There wasn’t a lot of energy in the game to start with,” Bylsma said – Eichel created a lot of excitement late. He scored 4:56 into the third period, converting Sam Reinhart’s nifty pass from the left circle in front. Kane also assisted.

“It was a heck of a play,” Eichel said about Reinhart’s dish. “I just happened to be in the right position.”

With the game tied late after Victor Rask scored, Eichel created a few strong chances, including a wraparound.

Bylsma has an interesting problem to mull with No. 1 center Ryan O’Reilly getting close to returning from a right foot injury. O’Reilly enjoyed strong chemistry beside Reinhart before getting hurt Feb. 19.

In recent games, Eichel, Kane and Reinhart have developed into a legitimate top trio.

“An interesting decision to make,” Bylsma said. “Sam’s played well with both of them. I do see Sam starting to have some good chemistry being a wing man for Jack.”

Kane added: “I think we’re really starting to build some chemistry. I think we have the confidence that if things aren’t going our way … we stick with it, we’re going to get our opportunities to score.”

Johnson subbed for Robin Lehner, who Bylsma said was healthy enough to back up.

Carolina’s Phil DiGiuseppe opened the scoring 6:42 into the second period. Marcus Foligno tied it at 7:52, beating Ward after Brian Gionta forced a turnover down low. Foligno has eight points in his last eight home games.