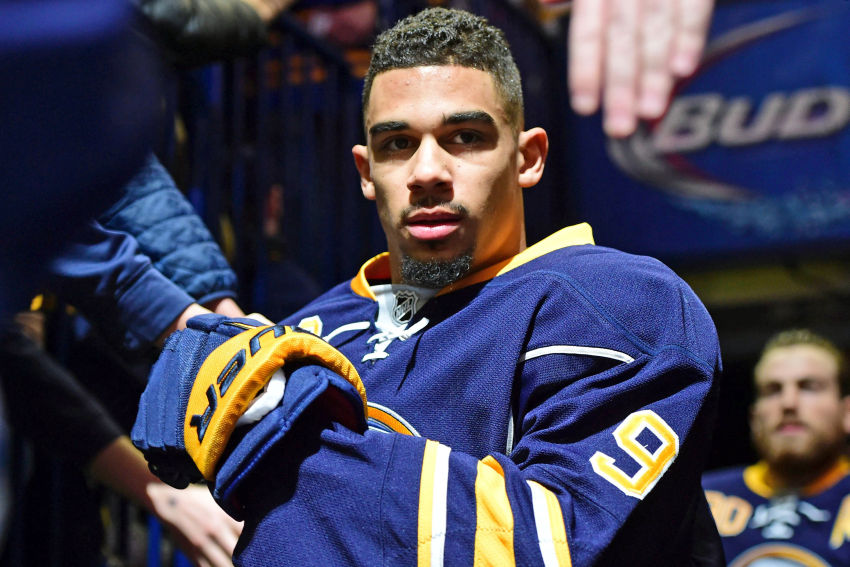 BUFFALO – Sabres winger Evander Kane, the subject of a sex offense investigation by Buffalo police following an alleged incident at a downtown hotel Sunday morning, said today he has done nothing wrong and looks forward to clearing his name.

Kane, 24, will play tonight against the Washington Capitals and skated this morning with his teammates inside the First Niagara Center. Prior to taking the ice, Kane addressed his teammates with coach Dan Bylsma present.

Following the Sabres’ skate, Kane left the ice, went to the dressing room and exited before returning about 20 minutes later.

He gave the following statement to a throng of reporters and cameras and answered no questions:

“Obviously you guys are all aware of the situation that occurred, or that’s going on right now. There’s not a whole lot I can say. I just want to say I’ve done nothing wrong. I look forward to clearing my name. I respect the legal process and unfortunately at this time there’s not much more I can talk about.”

Kane hasn’t been charged with a crime. The Buffalo News first reported the investigation Sunday and the team later confirmed it in a statement.

Bylsma wouldn’t discuss Kane’s situation or what he said to the team.

“We’re obviously aware of the situation and the allegations,” Bylsma said. “Yesterday the team made a statement. Evander made a statement just a few minutes to all of you. Beyond that, I cannot comment.”

When asked if he’s worried about how Kane might be mentally for the game, Bylsma replied, “I do.”

How was Kane, who was given Sunday off, mentally on the ice this morning?

“I think he was happy to be on the ice with his team,” Bylsma said.

In other news, Sabres goalie Linus Ullmark will start tonight, his first appearance in four games. Defenseman Carlo Colaiacovo and winger Marcus Foligno will be scratched.