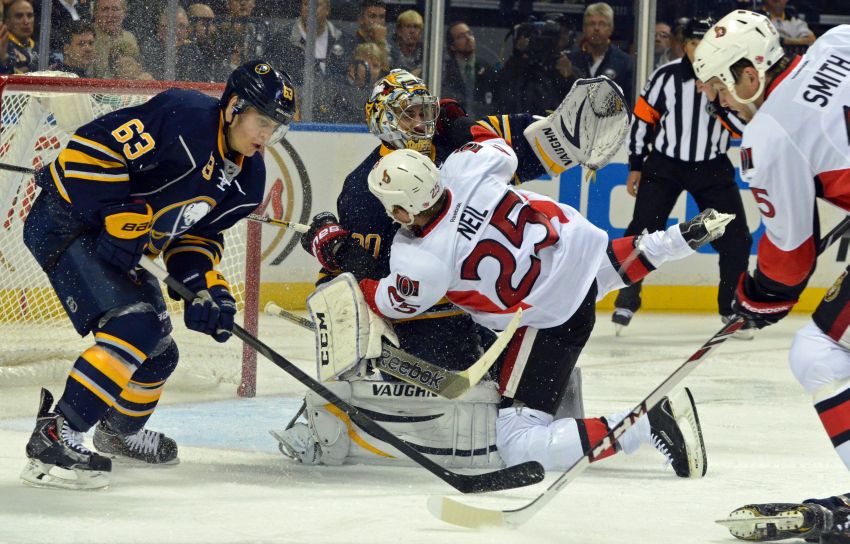 “We didn’t play a very good hockey game at the end of the day,” a visibly agitated Ron Rolston said Friday following the Sabres’ exciting 1-0 loss to the Ottawa Senators in the home opener inside the First Niagara Center.

The coach acknowledged the obvious, saying Miller, whose scintillating 45-save performance drew roars from the capacity crowd of 19,070 fans, “was awesome tonight.”

But Rolston, whose club has scored one goal and is 0-2 on the short season, said he didn’t like “pretty much everything” else about the loss.

In his opinion, the Zemgus Girgensons, Kevin Porter and Brian Flynn combination was the Sabres’ top line.

What does that mean if two neophytes and a journeyman are your best skaters?

“We’re in trouble in terms of elite in this league,” Rolston said. “So we got to fix some things.”

They better hurry up. The Sabres play tonight in Pittsburgh.

It’s likely Miller, who’s dazzled through two outings, will receive a well-earned break against the Penguins, an Eastern Conference power.

Incredibly, the 39 combined shots are the most in a scoreless period in the NHL’s expansion era (post 1967), according to the Elias Sports Bureau.

Ottawa finally scored with 1:35 left in regulation, its 45th shot, when Erik Karlsson pinched into the right circle and one-timed Clarke MacArthur’s pass between Miller’s legs.

“We made it extremely difficult on Ryan,” said Sabres defenseman Mike Weber, who admitted blowing his coverage on the goal. “He showed us tonight why he’s one of the best goalies in the world. It’s just discouraging because I feel like we let him down.”

Miller added: “It’s not a fun way to lose, especially in our opener. We wanted some energy and try to create some confidence here.”

He made arguably his best save with eight seconds left in the second period, diving forward and gloving Jason Spezza’s shot from the slot.

“Both goalies played amazing,” Spezza said. “It was back and forth, probably a little more back and forth than we would’ve liked. But Andy was once again stellar for us, and their guy was really good for them.”

“I got to bury one of those,” Vanek said.

Two games into the season, Girgensons, a 19-year-old rookie, has the only score.

“We’ve got to find a way to score goals,” Weber said.

If they keep performing like Friday, Rolston’s favorite line – Girgensons, Porter and Flynn – might get one tonight.

“They just play with effort and play the right way,” Rolston said. “It’s a simple, simple game. We don’t have enough guys playing the right way right now early in the season, so we’re back to square one.”

He also said: “That was our best line, I thought. Would everyone agree in this room?”

Rolston kept tinkering with his lines.

Rookie center Johan Larsson replaced Ville Leino (cracked rib), skating just 6:55 over nine shifts. It appeared the 21-year-old Swede would be playing with Steve Ott and Tyler Ennis in his Sabres debut. But he mostly skated on the fourth line with John Scott and Patrick Kaleta.

Porter moved up. So did 19-year-old Mikhail Grigorenko, who created some offense with Ennis and Ott.

“The compete just has to be way, way better at this level,” he said.

The Sabres lost defenseman Henrik Tallinder (upper body). The 34-year-old played just three third-period shifts. Even with an extra defender in Jamie McBain, the Sabres recalled defenseman Alexander Sulzer from the AHL, according to the Rochester Democrat and Chronicle. The Sabres waived Sulzer on Sunday.

In other lineup news, Scott played after sitting out Wednesday’s opener. With the tough guy in, Cody McCormick sat.