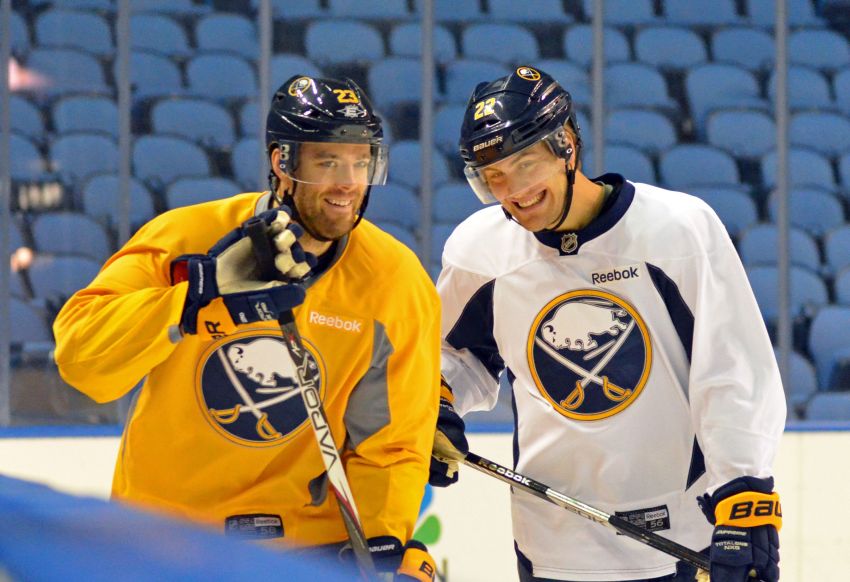 The Finn should only miss a couple of weeks, Sabres coach Ron Rolston said Thursday inside the First Niagara Center.

With Leino out, center Johan Larsson will make his Sabres debut in tonight’s home opener against the Ottawa Senators.

The 21-year-old Larsson pivoted Steve Ott and Tyler Ennis, who had been playing center, during Thursday’s practice.

Foligno practiced in a non-contact role Thursday and could return early next week.

After some shaky play early in their NHL debuts Wednesday, teenage rookies Zemgus Girgensons and Rasmus Ristolainen settled down.

“Me and Risto definitely remember the first shift, pretty rough one,” Girgensons said. “We watched some video on it. It’s pretty funny. We made a couple mistakes. It wasn’t funny at that point. But they didn’t score, so it’s fun to look at.”

Girgensons later scored the Sabres’ only goal. But his parents, who were traveling from Latvia to Detroit, missed it.

“I think they got delayed in Norway,” the 19-year-old said.

Longtime Sabres analyst Mike Robitaille is retiring following this season. Former Sabres winger Brad May will be joining the 25 broadcasts this season for pregame, intermission and postgame work.

May, whose famous overtime “May Day” goal eliminated Boston from the 1993 Adams Division semifinal, will begin full-time analysis work next season.

Robitaille cited health concerns from a car accident he suffered a few years ago and the desire to spend more time with his family as retirement factors.

Rolston on the Sabres’ power play, which was scoreless in seven tries Wednesday: “We just didn’t do a good job. I thought we played slow on the power play. I think at times we think we have to pass it into the net.”