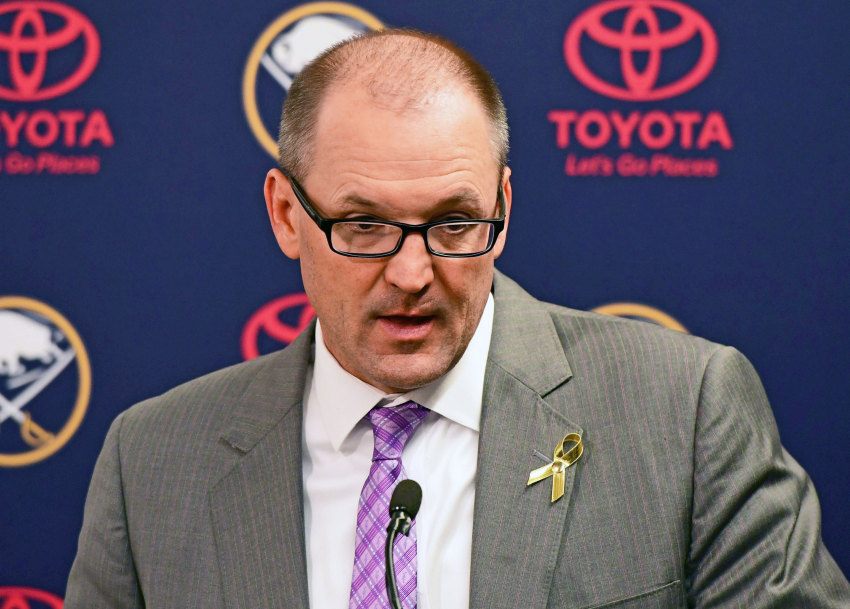 BUFFALO – When did we see this type of stretch from the Sabres – lots of dull, tight games they inevitably lose – before?

About three weeks ago, shortly after the season started, when they dropped four straight contests. After a brief turnaround, the Sabres are experiencing a similarly dreadful run entering tonight’s tilt against the Tampa Bay Lightning, the start of a four-game home stand at KeyBank Center.

Having lost five straight games (0-3-2), the Sabres are reeling, in danger of falling out of the playoff chase if they don’t start winning soon.

Teams far out of the race around Thanksgiving or Dec. 1 traditionally don’t climb back in, so the clock is already ticking. The 5-7-4 Sabres are mired in last place in the Atlantic Division, 14 points behind the first-place Montreal Canadiens.

“I don’t think there’s any real reason or answer as to why or what has happened,” Sabres defenseman Josh Gorges said Wednesday. “We’re playing teams where we’re (in a) tight-matched game and we get ourselves in situations where we’re making mental lapses. We’re not making clean plays when we need to. We’re not making the smart plays … and part of it is the confidence to make the right plays.”

The Sabres have six one-goal losses, including two in their last four outings. They’ve even hung close in some of their bigger defeats. In Tuesday’s 4-1 loss in St. Louis, for example, they began the third period tied at 1 with the Blues.

That’s one reason why the Sabres own the NHL’s worst offense. They’ve scored only 30 times in 16 games, a paltry 1.9 goals an outing. They’ve scored two or fewer goals in eight straight games, a stunning run of feebleness even in this low-scoring era.

For some perspective, the New York Rangers have already scored a league-leading 72 goals.

“It’s frustrating,” Sabres captain Brian Gionta said of the low offensive output. “There’s no way around it. You’re not going to win many games in this league by scoring one goal.”

The injuries have forced Bylsma, who will coach his 500th NHL game tonight, to utilize his top talents more than he planned to. In training camp, Bylsma said he wanted to trim defenseman Rasmus Ristolainen’s ice time a bit. Instead, the Finn has averaged 25 minutes, 36 seconds a game – 17 seconds more than last season.

O’Reilly, out the last two games with a “mid-body” injury, has averaged 21 minutes, 46 seconds a game – two seconds more than last season.

“We’ve been leaning on them quite a bit now with time on ice,” Bylsma said of his top players. “Every time I see the time on ice, my words to you all ring in my ears (from) training camp, Ristolainen’s minutes on the ice. We’re going for the next stretch here, for the injuries we have, we’re going to be leaning on those guys heavily through this home stretch.”

The Sabres have been awful at home so far, scoring only seven goals in their 1-3-2 start. They’re upcoming schedule is difficult, with the Stanley Cup champion Pittsburgh Penguins visiting Saturday after the Lightning, an Eastern Conference finalist last season.

The Lightning, however, won’t have ace scorer Steven Stamkos tonight. The former 60-goal scorer is out indefinitely after tearing his lateral meniscus Tuesday in Detroit.

O’Reilly, who’s day-to-day, is questionable for tonight’s game, Bylsma said. The No. 1 pivot skated on his own Wednesday and is “progressing,” Bylsma said.

The Sabres held a team meeting Wednesday instead of practicing. They sent rookie defenseman Casey Nelson to the Rochester Americans later in the day.

In other injury news, Bylsma said Eichel, out all season with a high left ankle sprain, is “upping his skating regimen and showing signs of progress.”