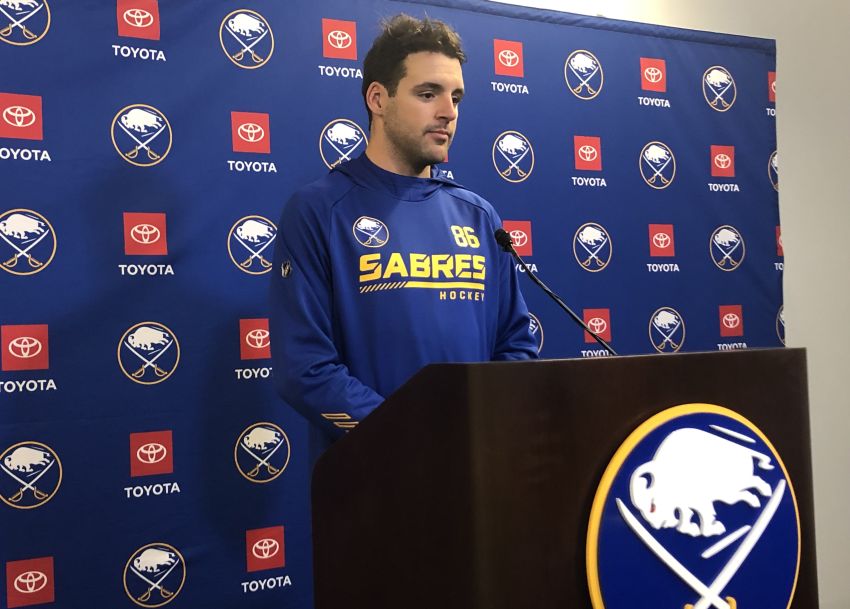 BUFFALO – Barely two years ago, Sabres newcomer Christian Wolanin figured more NHL success would follow his standout rookie season. After morphing into a dominant AHL defenseman, he forced his way up to Ottawa, becoming one of the Senators’ regulars.

Then Wolanin tore his labrum preparing for training camp in 2019 and underwent surgery. The injury sidelined him until early March. Days after he returned, the COVID-19 pandemic ended the Senators’ season.

Last year, the pandemic delayed the season three months. Wolanin struggled to regain his spot and was traded to Los Angeles, where he played sparingly with the Kings.

Wolanin has played just 43 total games – 21 in the NHL, 12 in the minors and 10 in the World Championship – since injuring his shoulder. Before the Sabres claimed him off waivers Saturday, the Kings scratched him for their season opener.

“(You) have a successful rookie year and (think of) all the success in the world going forward and then all of a sudden, shoulder surgery at the start of my second year and then COVID happened,” Wolanin said Monday inside KeyBank Center. “So you’re two years without playing (many games) and you go into last year, no fans. It was kind of like a perfect storm in a negative way.”

Wolanin, 26, sounded energized following Monday’s practice, his first with the Sabres. When he learned Buffalo had claimed him, he said his first reaction was, “Let’s play hockey.”

The American liked the Kings organization and living in Los Angeles. Still, he wanted a fresh start. While Sabres coach Don Granato said Wolanin will sit out Tuesday’s game against the Vancouver Canucks, he will likely receive an opportunity soon.

Wolanin did not have a regular partner during Monday’s practice.

“I’m going to observe like everybody else at this point, much like we did in training camp and try to learn more about him as we go along,” Granato said of Wolanin. “Just now it’s getting him integrated and then we read and react for us in this process.”

Wolanin sees a fit with the Sabres, a rebuilding team whose roster is filled with players trying to establish themselves.

“It was a team, I think, that I fit well with, a bunch of guys that want to earn it every day, want to win, want to turn things around for this city,” said Wolanin, who will wear No. 86 with the Sabres. “And I want to be a part of it.”

Wolanin learned what a special sports town Buffalo can be when he played here Nov. 3, 2018. Prior to the contest, winger Jason Pominville was honored for his 1,000th NHL game. Then the Sabres throttled the Senators 9-2.

“So got to see Buffalo to their fullest, I guess, for lack of a better expression,” he said. “It’s a hockey town. You know that it’s a sports town. I was fired up to come here.”

Wolanin knows a few Sabres well, having played with goalie Craig Anderson in Ottawa and winger Drake Caggiula during their college days at North Dakota. He was also teammates with center Tage Thompson last spring when they represented Team USA at the World Championship in Latvia.

That tournament was a special experience for Wolanin, who generated some much-needed confidence as the U.S. earned the bronze medal. The consistent ice time buoyed him, and he recorded one goal and six points.

“To be able to go out there, play, be a part of a team, again, similar to this team, where it’s just a bunch of misfits,” he said. “All the superstars didn’t want to go because of the COVID year. … It was just a blast. I think it was kind of a nice reminder to myself and to those guys that when you get the opportunity, you can run with it.”

The 6-foot-2, 190-pound Wolanin considers himself a puck-moving, offensive defenseman. Naturally, he has tried to develop into a more well-rounded presence.

Early in his career, Wolanin, who played defense and forward until his freshman season at North Dakota, said he struggled defensively.

“I really think I’ve cleaned up there,” he said. “That comes just with adversity. After not playing … you kind of think, you start looking in the mirror, you’re like, ‘What do I need to work on in order to be established?’ I think all the little areas that I might’ve struggled with earlier on are tightening up.”

Wolanin’s father, Craig, who played 695 NHL games over 13 seasons as a defenseman, helped him learn the position.

“He’s like ‘All right, you’ve got some work to do,’” Christian said. “So we started chipping away at that.”

The Wolanins had much different paths to the NHL. Craig jumped straight to the NHL as a teenager after the New Jersey Devils drafted him third overall in 1985. He played for four franchises and won the Stanley Cup with the Colorado Avalanche in 1996.

“That thing rocks,” Christian said. “It’s actually Bills colors, I might be able to rock it here.”

The Senators drafted Christian as a 20-year-old in the fourth round in 2015, 107th overall.

“He’s third overall, 13-year career,” Christian said. “I’m last year of draft eligibility, fourth-rounder that’s probably not supposed to make it, right? But he’s just there for everything and keeps me honest.

“He’s not the type of dad that says, ‘Oh, you’re getting screwed, you should be playing,’ this and that. He says, ‘Look in the mirror, what can you do to get better?’”

Wolanin, who grew up in Michigan, said his parents are “the reason I’m here.”

“Mom … she’s the loving one, supportive one,” he said. “And then my dad is just everything.”

Granato said Anderson, who made 30 saves in Thursday’s 5-1 win over the Montreal Canadiens, will likely start Tuesday.

“That would be the way we’re leaning and planning,” Granato said.