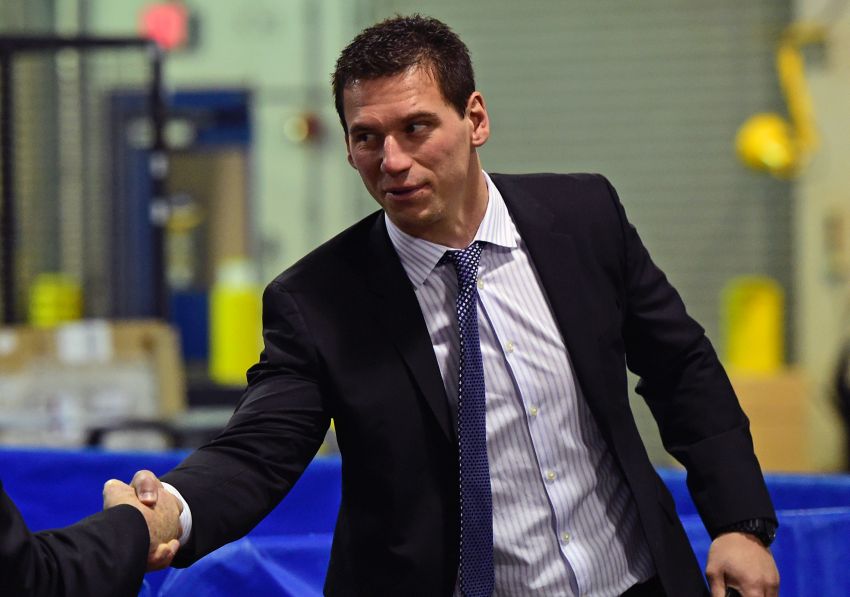 Cody McCormick has still been around the rink. ©2016, Dan Hickling, Olean Times Herald

“Cody McCormick is not going to jeopardize his life or his family by trying to play again,” Murray said inside the First Niagara Center. “We support him in that. He was around this winter and did some other things when players were rehabbing. So I don’t know if that’s going to be a future thing or not. That’s something that he dabbled at and seemed to like.”

McCormick, 32, hasn’t played since he was briefly hospitalized when clots spread to his lungs after he blocked a shot in January 2015. The popular veteran, the Sabres’ most frequent fighter during his five-year run, has one year left on the three-year, $4.5 million contract he signed July 1, 2014.

In December, McCormick, always an accountable and friendly presence, told the Times Herald he felt normal and was taking a “precautionary dosage” of blood thinners.

“I want to evaluate how much risk there might be to playing,” McCormick said then. “And if there’s any risk, it’s not worth it for me to try to play with where I’m at in life and put my family in the position where they would worry about me every game.”

Murray said the Sabres could place McCormick on long-term injured reserve or reach a financial settlement.

“We haven’t gone down that road yet,” he said. “I guess depending on what we do or (are) able to do with free agency might determine that. Right now, there’s no reason to question it because we’re not at that point.”

McCormick often goes on the ice before practice with rehab coordinator Dennis Miller and helps injured players go through drills.

Murray said the Sabres have no plans to exercise a buyout on the final three seasons of winger Matt Moulson’s five-year, $25 million contract. The three-time 30-goal scorer endured a brutal season, scoring only eight goals.

“He knows he has to work hard this offseason and he’s very disappointed in himself, his own season,” Murray said. “It was a tough season for all of us to watch, and hopefully he can regroup and come back next year and be better.”

During an appearance on WGR in early March, Murray ripped Moulson, saying he “has neglected some things in the last couple years as far as how workouts are changing, how we as an organization are changing with our young players and even our players on the team.”

Those comments ticked Moulson off, and he told Murray during their “long talk” Sunday, the GM said.

“We talked about that yesterday, and that’s fine,” Murray said. “He works hard. It was not a question of him working hard; it was a question of him maybe changing his workout regime and stuff like that. He feels strongly in the way he works out and the effort he puts into it. He was very strong to that in the exit interview. He tells us he’s going to work extremely hard to get his game back.”

The Sabres haven’t had “much discussion” yet with defenseman Rasmus Ristolainen’s agent about a new contract. Ristolainen, 21, is a restricted free agent and was the team’s best defenseman most of the season.

The Finn, the only Sabre to play all 82 games, was also a team-worst minus-21.

The Sabres placed forward Cal O’Reilly on waivers Monday and expect him to join the Rochester Americans today.